And a happy 110th birthday to The Herald-Patriot 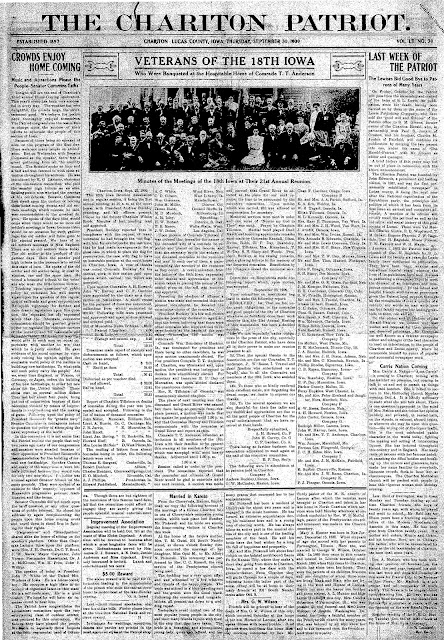 It would be entirely appropriate on Oct. 7 to stop by the Chariton Newspapers office and wish The Herald-Patriot a happy 110th birthday, although that might confuse the staff a little. The Herald-Patriot generally traces its origin to the birth year of its older half, the Patriot, founded in 1857. That would make it 162 years old, impressive and  entirely acceptable.

But this is an image, above, of the final edition of The Patriot, published on Sept. 30, 1909, when it ceased to be as an independent publication after 52 years. The next week, the premier edition of merged Herald-Patriot appeared on Oct. 7. Sadly, editions of the Herald-Patriot published during its first few months seem to be missing.

Sarah Lucretia Lewis, a savvy but reticent Quaker businesswoman, had purchased The Patriot from George H. Ragsdale effective Jan. 1, 1883, and published it successfully until her death from tuberculosis at the age of 62 on Dec. 18, 1899.

Under the terms of her will, Sarah's estate --- administered by her brothers, Elijah H. and Evan --- was given the open-ended option of continuing to publish the newspaper with her nephew, Elijah H. Lewis Jr. (son of Evan), as editor, for so long as it served her purpose --- the care and benefit of Evan  and his four children. Evan's wife, Corilla, also had died during 1899, also of tuberculosis.

Evan, although extraordinarily talented and widely acknowledged as one of creation's kindest souls, also was a notable drunk and could not be trusted to manage much of anything on his own although Sarah did leave him the family home outright.

By the time of Sarah's death, her brother, Elijah, had accepted (during 1897) a political appointment in Washington, D.C., and was in Chariton to help out only on breaks from his duties there. The capital city would remain his principal residence until his death during March of 1913 at the age of 80. So the burden of the business fell upon the younger Elijah and his father --- when he was sober.

Evan died on July 7, 1908, at the age of 64, at the Iowa Asylum for Inebriates in Knoxville (later the Veterans Administration Medical Center campus) after drinking himself into a comatose condition from which he could not be revived.

Young Elijah, who had devoted much of his life to watching out for his father and cranking out weekly editions of The Patriot, now was anxious to move on to other things. And his uncle, the senior Elijah, was content to let the newspaper go, knowing that it had served its purpose.

As a result, The Patriot was sold to Sam Greene, editor and publisher of The Herald, and the two newspapers were merged.

Here's the announcement as it appeared in The Patriot's final edition under the headline, "Last Week of The Patriot."

On Friday, October 1st, the Patriot will pass from the ownership and control of the heirs of S.L. Lewis, its publication since her death having been carried on by them in the name of the Lewis Publishing  Company, who have sold the "good will and fixtures" of the Patriot office to S. M. Greene, former owner of the Chariton Herald, who, in partnership with Paul S. Junkin, of Creston, and his brother, Charles M. Junkin, of Fairfield, will continue its publication by merging the two papers into one, under the name of "The Herald-Patriot" with Mr. Greene as editor and manager.

A brief history of this paper may not be out of place in connection with the above announcement.

The Chariton Patriot was founded by John Edwards, a prominent and leading citizen, in 1857, and was the first permanently established newspaper in Lucas county, it being the next year after the national organization of the Republican party, the principles and policies of which it has been from its first issue an earnest and consistent advocate.

A mention of its editors will vividly recall the political as well as the industrial and social history of this good county of Lucas. These were Val Mendel, Charles Austin, E.B. Woodward, T.M. Stuart, Eugene Fawcett, J.W. Ragsdale, Geo. H. Ragsdale, Moses Folsom, T.W. Fawcett and W.H. Maple.

January 1, 1883, the Patriot was purchased of Geo. H. Ragsdale by S.L. Lewis and for 26 years the Lewis family have conducted the publication. They have been busy, anxious and sometimes hopeful years, wherein the lives of its publishers have been devoted to publishing a newspaper fitted to meet the demands of an intelligent and prosperous constituency. To the valued and helpful friends who have so generously given the Patriot loyal support through all the vicissitudes of over a quarter of a century, any words we may write here can but faintly express our lasting gratitude to them, one and all.

To the editor and publishers of the Herald-Patriot we extend our best wishes and bespeak for them generous and deserved patronage. Mr. Greene is too well known as a veteran newspaper editor and manager of the best character to need an introduction to the people of Chariton and Lucas county, where he commends himself by years of popular and successful newspaper work.