A little about the life and times of Theopolis Gibson 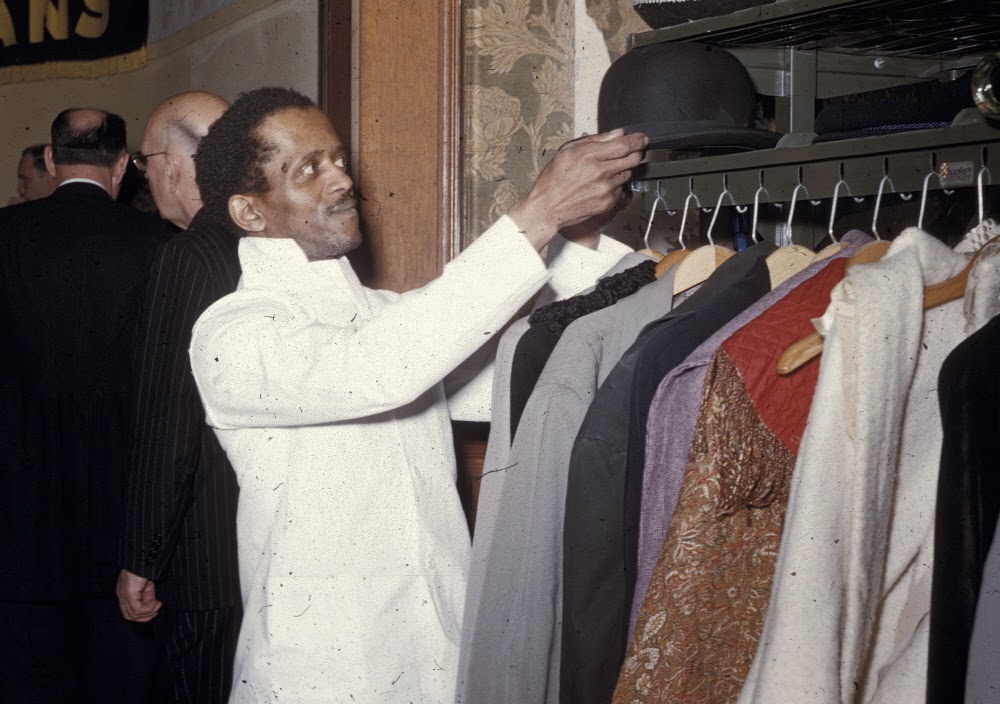 I doubt that Chariton Rotarians thought twice before asking Theopolis "Buster" Gibson to portray a servant when that venerable service organization held its big party on April 13, 1955, at Mallory Castle --- just before the house was demolished.

But this photo of Buster in the foyer at the base of the mansion's tower, where he opened the front door and helped guests with their coats and hats, makes me uncomfortable 60 years later. I wonder if he was paid, or did it out of the goodness of his heart  --- something Gibson would have been likely to do. There are no signs in other photos of the event that he mingled with guests, shared their meal or joined them in the ballroom for the program and dancing. But then, in 1955, it was unlikely that he would.

When Buster died in 1990, he was the last survivor of Chariton's historic black community --- never large, rarely exceeding 100 or so at any given time; but a part of Lucas County for more than a century.

He was born July 20, 1914, in Des Moines. His mother was Elizabeth Mayella Martin, a member of one of Chariton's largest and most tightly knit black families. She had married Joseph Gibson on Oct. 16, 1907, in Chariton, and then moved to Missouri where their first child, Beatrice, was born. By 1920, Elizabeth and the two children were living in Chariton with her father, William. Joseph wasn't there. She divorced him in 1928.

All of Chariton's black families were poor --- while it was possible to make a living, there were few if any opportunities for advancement. That's why young people for the most part left. When the 1930 census was taken, Elizabeth was supporting her children as a day laborer; in 1940, she was employed as a maid.

Theopolis attended Chariton High School, graduating with the class of 1935. He seems to have done well --- played football and was a member of Quill and Scroll, a high school journalism honor society. This is cool, I thought while reading some reports.

Then I came to reports of Class Day activities in late spring, 1935. Part of the program was reading an account of an imaginary television program --- yes, students knew about television in 1935 --- in which class members were equated with popular Hollywood or media figures of the day: Clark Gable, Ginger Rogers and the like. Theopolis Gibson --- Stepin Fetchit.

Relatively few young black people remained in Chariton once they were self-sufficient --- but Buster always did. Perhaps in part because, as the years passed, he became the sole support of his mother, who died at age 66 in 1953, and his dependent older sister, Beatrice, who shared the family home on West Linden Avenue with Buster until her death in 1964.

By 1940, he was employed at a barbershop in Chariton --- operating the shoeshine stand, I believe, but am not certain of that.

Then World War II broke out and Buster became eligible to be drafted into the U.S. military --- strictly segregated by race until President Harry S. Truman ordered otherwise during July of 1948.

The editor of the Herald Patriot reported in his edition of Oct, 8, 1942, that "Two Chariton Negroes, Tom Richmond and Buster Gibson, will report at Camp Dodge Saturday for physical examinations."

A follow-up report in the Herald Patriot of Oct. 15 reported under the headline "Richmond and Gibson Inducted Into the Army" that --- "Tom Richmond and Buster Gibson, Chariton Negroes, passed final physical examinations at Camp Dodge Tuesday for entrance into the U.S. Army. After a two weeks' furlough they will be called to active duty with a Negro regiment being formed in Iowa."

I could find nothing about that Iowa regiment, but thanks to a group of Chariton women who carefully tracked all Lucas Countyans who served during World War II, we know a good deal about his service.

Although nothing was noted about his training, Buster eventually was assigned to the 2047th Quartermaster Truck Company, an all-black unit (with white officers) of the 1513 Quartermaster Battalion (Aviation), part of the U.S. Army Air Corps.

The unit arrived in France six days after D-Day "and our first camp for 3 weeks was 10 miles from Maule; then 3 months at Langres and 5 months at St. Mihiel.

Theopolis, who had advanced in rank during his years of service from private to PFC, then to "Tech/5th gr.," returned to the United States on Dec. 19, 1945, and was honorably discharged on Dec. 24. His citations and awards included the Victory Medal, American Theatre Ribbon, European African Middle Eastern Theatre Ribbon (with 4 Bronze Battle Stars), 4 Overseas Bars, 1 Service Stripe and the Good Conduct Medal.

During January of 1946, The Herald Patriot reported his return home as follows: "Theopolis Gibson, Tech. Corp., son of Mrs. Elizabeth Gibson, of Chariton, arrived home Christmas day from the European Theater of Operations where he saw service in France, Germany and England. Gibson was in service three years and two months, two years of the time overseas. He arrived in this country Dec. 19 and has received his honorable discharge from the U.S. Army."

Buster seems to have worked at various jobs during the years that followed, until eventually going to work for the city of Chariton. I have no idea what those jobs were, but others may remember.

In August of 1948, when a new Studebaker dealership --- Murray Service --- opened in Chariton, the firm advertised that "Theopolis Gibson is in charge of lubrication, washing and polishing.

His mother died in 1953 and sister Beatrice, in 1964. Buster continued to live in his own home until about 1982, when he moved to the Southgate Apartments. When he became unable to care for himself, a place was found for him at the Iowa Veterans Home in Marshalltown. He died there on Feb. 9, 1990, at the age of 75.

By that time, there was no one left to write a complete obituary, so the death notice published in The Chariton Leader of Feb. 13, 1990, is not especially informative. It reads:

"He was a longtime Chariton resident, and was employed by the city for a number of years. He was in charge of the city dump when it was still operating.

"Services were held Monday at the Fielding Funeral Home, with the Rev. M.E. Van Antwerp officiating. Burial was in the Chariton Cemetery.

"Memorials may be made to the Chariton Public Library."

Theopolis left no one to tell his stories, nor did he leave a written record. It would be possible to assemble a few more details of his life, but we'll never know how he felt --- what his aspirations were, how he viewed his friends and neighbors, to what degree he experienced discrimination, if he had regrets about lost opportunities. All we can say is that he was one of us --- and still is.

Mickey said...
This comment has been removed by the author.
4:05 PM

I knew Buster as a child. My sister and I had a family that watched us while my mom worked nights at the Hy-Vee wholesale. The father worked for the city and was friends with Buster. He visited many times while we were there and was always very nice. Since he was the only African American man that I knew (as a child), I wrote a paper in college about Buster. My grandpa, Verne Vincent, went to school with him and I based it on information from my grandpa. I thoroughly enjoyed this article! Thanks!

I remember Mr. Gibson. He was a very nice man. He and my uncle were good friends. If I remember correctly he played baseball when Lucas county had teams and had a reputation for being quite good.

Great article. I delivered the newspaper to Buster and his sister. Didn't know anything about them except that they were nice people. Thanks for the insights. A lot of good details.

Buster lived just down the sreet from us growing up. I really enjoyed him. When I had my tonsils out he brought me ice cream. He a was very man and a pleasure to talk too.

Really enjoyed the story of his life. Thanks to whoever put it together. Very informative. I have often thought about him over the years.