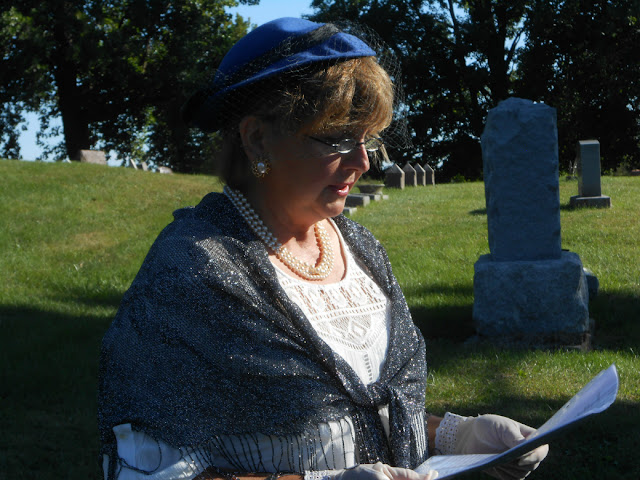 Minnie Day Kirk seemed to have just about everything a young woman of her social standing was expected to expect in Chariton during the 1890s. She was attractive and popular, had married a prosperous husband, had a lovely home, was an accomplished hostess and had many friends. But tuberculosis, the great killer of young adults (and others) at that time, had no respect for social standing or wealth --- and it claimed her during 1895 at age 29.

Here's the script that Patti Bisgard used to tell her story during the annual Chariton Cemetery Heritage Tour program, "Secrets of the Stanton Vault," held on Sept. 20. 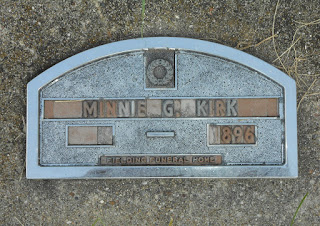 Welcome to my home, ladies and gentlemen --- such as it is. I was an accomplished hostess in my time and were it 1890 rather than 2015, would offer you refreshment.

My name is Mrs. Charles J. Kirk --- we rarely used our given names except among family and close friends in those days when women fortunate enough to marry were looked upon as extensions of their husbands. But you may call me Minnie --- Minnie Gray Kirk.

I was in my 30th year, the flower of young womanhood as the gentleman who wrote my obituary put it, when tuberculosis --- then the great killer of young adults --- claimed me on May the 2nd 1896.

We called it “consumption” in those days, but in more polite society it was considered indelicate to mention even that, so my demise was attributed to bronchial and lung troubles. I died in Las Vegas, New Mexico, then a resort populated in large part by affluent people similarly afflicted who hoped the dryer climate would benefit them. I had spent the winter there, accompanied by a cousin, with visits from Charley at Christmas and again in the spring.

I might have been a country girl --- born on a farm near Oakley in 1866 --- but my father, Andrew Gray, aspired to other things and so when I was very young we moved to Chariton. Here, he achieved a modest level of prominence as cashier of First National Bank, city clerk and, for two terms, as county recorder. My mother’s name was Margaret and I had three siblings, a sister, Lillian, and two brothers, Edgar and Wright --- the latter of whom died of scarlet fever in 1887, during the first year of my marriage.

My education was received in the Chariton schools and I graduated from Chariton High School with the class of 1884 during exercises held in the Mallory Opera Hall. Eight of us graduated, among them Arthur Blake, who was the only male.

I was bright, attractive and vivacious --- if I do say so myself. So much so that during December of 1884 I was “elected” Most Popular Young Lady at the annual Firemen’s Banquet with 326 votes --- at 10 cents per vote. It might interest you to know that Temp Percifield was the lucky winner of the raffle for a cow at this banquet, another fund-raising scheme of the firemen.

Immediately after graduation, I began to teach primary in the Chariton schools, my classroom located in the new Columbus building. But I soon fell in love with the dashing Charlie Kirk, we married and since married women were not permitted to teach in the lower grades, my career in education was short.

Charlie, a pharmacist by profession, arrived in Chariton during May of 1884, as I was graduating from high school, and opened Kirk Drug Store in the Union Block.

Charlie was some 10 years my senior and something of a chancer, so my parents were not enthusiastic about our courtship. As a result, we were married at the Methodist Church on Dec. 29, 1886, with only our friends, Bates and Florence Manning, as attendants. We had not told anyone other than the Rev. Mr. Collins of our plans.

After our marriage, I resigned my teaching position and after a few days at the Depot Hotel, we took up residence in a rented property in north Chariton where I began housekeeping, perfected my skills as hostess and awaited children --- but none ever arrived.

Soon thereafter, Charlie developed a highly profitable sideline --- buying, selling and racing fine horses. Although he continued in the drug business, it increasingly was managed by hired assistants.

Charlie was a great sportsman, too --- hunting, shooting and fishing --- and we both enjoyed camping. The late 1880s held wonderful times. During July of 1888, for example, we joined friends for a full week of camping along White Breast Creek near Lacona. During October of that year, we traveled with six of our friends to see the sights at the St. Louis World Fair.

Charlie continued to travel extensively on his own, buying and selling horses across America and Canada. By 1890, he had settled upon a favorite breed, French draft horses called Percherons, and we traveled in Europe for two months that summer, then returned to America in August via freight steamer with animals he had purchased.

Our new affluence allowed us to purchase during 1891 the fine home of Major and Mrs. C.T. Haskins on East Auburn Avenue and it became the venue for much entertaining. The High Five party we hosted for 40 guests during June was deemed the social event of the season. Our home later was occupied by the T. P. Stanton and Foote families and now is owned by Marilyn and Jack Cavanaugh.

By late 1892, however, my bronchial condition was becoming more severe. At that time there was no medical treatment for consumption but an arid climate and fresh air eased symptoms and, it was thought, encouraged the body to heal itself.

I spent many months in California, commencing in February of 1893, then during 1894 settled down for a time in Hot Springs, South Dakota. I was a resident for many weeks during 1895 of a sanitarium in Des Moines.

Finally, during the fall of 1895, I set out for Las Vegas, New Mexico, renowned at the time as a refuge for those with conditions similar to mine. My symptoms abated, then returned. Charlie visited at Christmas and then, again, in the spring, by which time It seemed possible that I would be able to return home in improved health.

That was not to be, however, and just days after Charlie left for home during April I was stricken with pneumonia, he returned hurriedly to my bedside and on May 2, I died.

Charlie continued to live in Chariton for some years after my death, remarried and continued to have success. In 1906, he removed to St. Joseph, Missouri, as head of the Percheron Importing Company, but then his health began to fail. He suffered a nervous breakdown, then on March 10, 1917, a fatal stroke.

His remains were returned to Chariton and interred here in the vault near me, but some years later his second wife --- preparing to remarry and move to California --- had his remains removed and buried on a family lot nearby. I have been on my own here since that time.
Posted by Frank D. Myers at 5:11 AM