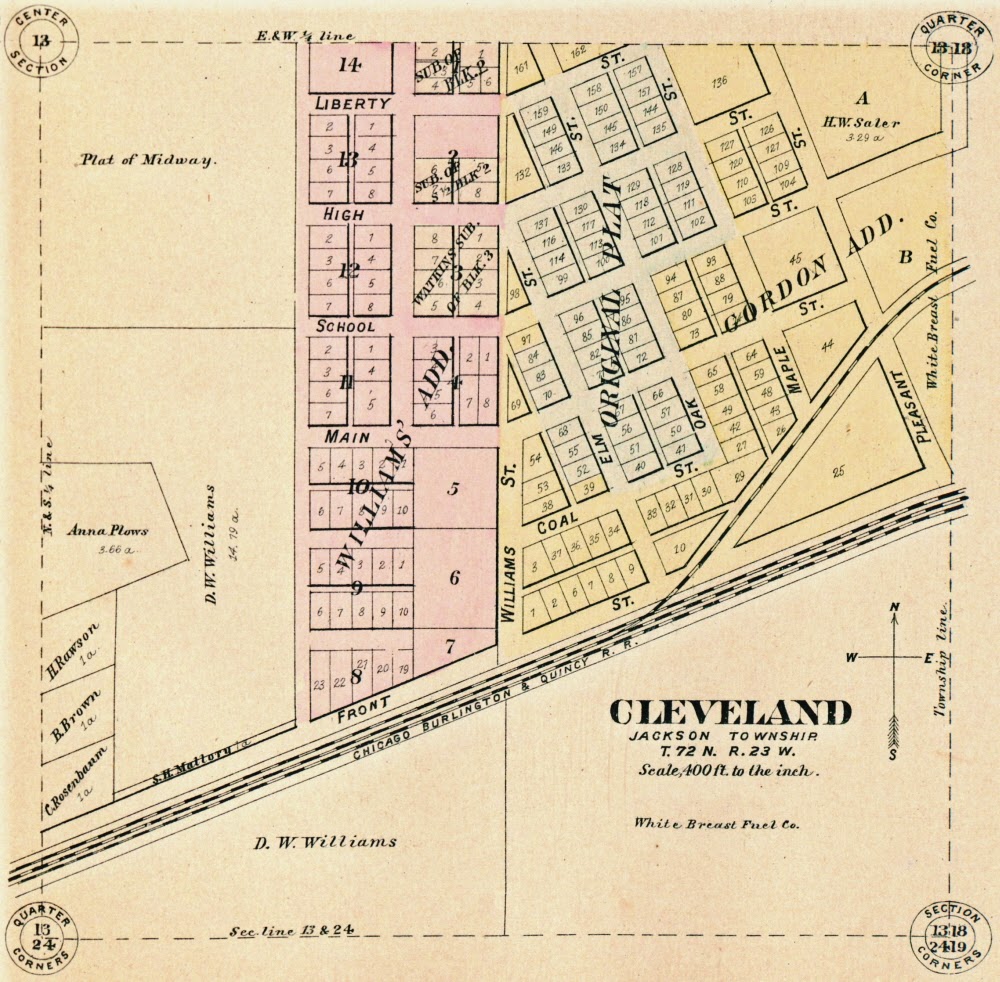 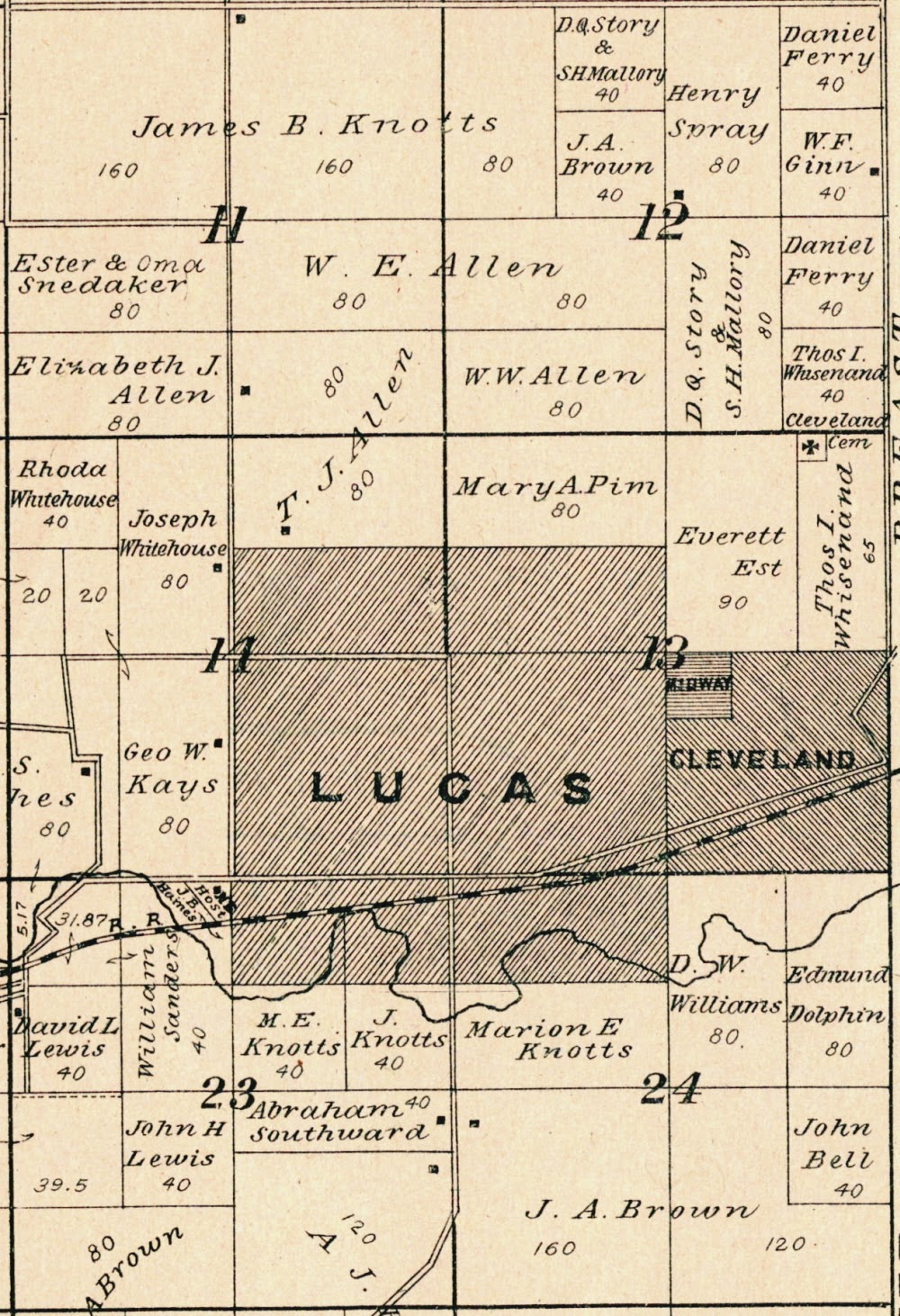 What I want to do here today is allow William Haven to tell in his own words the tale of financial and physical adventures involved during the mid-1870s in locating and then sinking the first shaft to deep coal deposits under Lucas County. In doing so, he set off a boom-and-bust industrial-scale mining industry that didn't sputter out finally until 1950 when the last deep mine closed just north of Chariton.

The setting is the area just east of Lucas, in Jackson and Whitebreast townships, and the illustrations here are plats of the ghost town of Cleveland, the White Breast Coal & Mining Co. company town surveyed by Haven, which he first platted on June 26, 1878. This was some two years after coal had been located and the Whitebreast No. 1 mine had opened for production. The plats are taken from Lucas County's 1896 land ownership atlas.

At the height of this first phase of big-time mining in Lucas County several thousand people lived in Lucas and Cleveland as well as the unincorporated area known as East Cleveland that straggled off to the east. Many residents of East Cleveland were black and there was not always peace in the White Breast valley, but that's a story for another time.

By now, 2014, the Clevelands have disappeared and only a couple of hundred people live in Lucas. Nor would it be easy to locate the sites of the three Whitebreast mines, No. 1, No. 2 and No. 3, which were located just east of Cleveland, over the line in White Breast Township.

The cast of characters who were among Haven's first financial backers is fascinating, but there isn't time to go into their lives and times, too. So here's a summary of the principals involved in the formation of the White Breast Coal & Mining Co., organized immediately after coal was struck.

John Cleveland Osgood, who would later rise to robber barondom in Colorado and elsewhere, was only 25 when the company was formed. He was born in Brooklyn, but came to Burlington with his parents at age 6. In 1874, after working as a bookkeeper in New York City, he accepted the position of cashier of the Union Coal & Mining Co. of Ottumwa --- also William Haven's employer at the time. That was how they became acquainted. By 1876, Osgood was cashier of First National Bank, Burlington.

Wesley J. Jones was a little older when coal was struck --- 35. He grew up in Burlington, and was mad for commerce. A modest book could be written about his retail and wholesale adventures in the mining towns of the old west before he finally settled down again in Burlington. There, he opened what was described in 1881 as "one of the most commodious and elegantly furnished book and stationery houses in the West." His exploits in the West, however, had destroyed his health and he died during 1885, age 44.

Lewis R. Fix, age 37 when the White Breast company was formed, was an officer veteran of the Civil War and a jeweler in Burlington when he agreed to back Haven. Fix had the grave misfortune to be found dead on railroad tracks in Chicago, where he then was living, during 1890, age 51, with a bullet hole above his left eye.

Haven's  fourth backer --- Tom Potter, age 36 --- had just accepted a position as assistant superintendent of the C.B.&Q. Railroad in 1876 and withdrew after his boss, Charles E. Perkins --- generally recognized as one of the most honest and upright rail entrepreneurs ever --- told him he didn't want company officials involved as investors in firms that might benefit from rail patronage. Potter eventually rose to the position of vice-president and general manager of the Union Pacific, then dropped dead on 9 March 1888, age 48, having literally worked himself to death.

Now, here's William Haven's account of striking the first deep coal in Lucas County, contained in a letter dated Nov. 18, 1920, and published in the alumni newsletter of his alma mater, The Norwich University Record, on Jan. 8, 1921:

"The original agreement, made between Wesley Jones, J.C. Osgood (and) Lewis R. Fix of Burlington, William Haven of Ottumwa and an unmentioned friend (Tom Potter), represented by William Haven, was that the 540 acres under lease from Col. B.O. Carr by William Haven would be prospected to the extent of four holes by churn drilling, the only method then available, in 1875, to the total amount of $3,000 to be paid over to J.C. Osgood as treasurer of said fund.

"Jones, Osgood and Fix each paid an equal amount. Potter a less sum. I was to be credited with one-fourth the total for superintending all the work and if coal was found, transferring said lease to the company with $60,000.00 capital stock.

"At several locations, attempts were made to get through the quicksand just below creek level. Finally, close to the Carr west line, we succeeded and drilled to a depth of 138 feet when clay cavings made the progress so slow that it looked impractical to go further. At my suggestion, as we had passed through the two upper coal beds, showing uniformity of strata, the plan for four holes was abandoned and it was agreed that we would bank on the drill hole and sink a five-foot diameter shaft (in those days considered ample size for an air shaft).

"At a depth of about 200 feet the agreed amount of $3,000 had been expended and expenses were running about $500 per month. The other parties refused to go farther but finally agreed to go another month, viz., the month of December, 1875, if I would pay one fourth, or about $125. This being fair, I agreed.

"About the 20th in sending for some supplies to Osgood, I wrote: 'I hope to make ourselves a good Christmas present.' To which he replied: 'My faith gave out last Thanksgiving. I am not planning any trips to Europe on what we may find in Lucas County.' This letter I yet have and it has been read by John and George Verner and Will Frost.

"To resume --- the miners and myself well knew we were in a natural shale roof to a bed of coal, but how thick the roof or coal remained to be determined. I wrote Col. Carr that we had reached our limit, and he authorized me to draw on him for $100. Mr. Mabury Skidmore sought contributions, to be repaid in the event a working bed of coal was found, and here is where Dave Thompson comes in, for those who signed for future payment were Dave Thompson, $10; S.H. Mallory, $10; Elijah Lewis, $5 (total Chariton $25). Lucas --- Mabury Skidmore, $10; Baker Bros., $10; Bill Chase, $5; and one other, $3 (total $28), with Col Carr, grand total $153.00.

"I called a meeting of the employees, some are yet living, and stated I had $153.00, all of which would have to go for supplies. I wanted to keep on another month but had no money for wages. That it went without saying in the event we found coal they would have their choice of working places and if we did not, I would see that all got places in the Happy Hollow mine (between Chillicothe and Ottumwa, along the Des Moines River), where I was superintendent of mining operations. This was agreed to.

"We were down 238 feet. When the sun did not shine Jan. 1, but the rain descended, we had a 238-foot well of water, as it was getting all the side hill drainage from a three-inch bed of quicksand. We sunk a four-foot-square shaft a little higher on the hill drained with side ditches, cutting off the side hill supply, then raising the water by bucket, reached the shaft bottom January 10. We still had to raise so much water that progress was slow, but the following Saturday, I think the 14th, we reached the coal.

"All day Sunday was used in going through the 5-foot, 3-inch bed. Monday morning at Ottumwa I received the cypher message which I had arranged with Tom Francis, (who was) in charge, to send, and I knew we had over 5 feet (of coal).

"Arriving at the shaft early in the afternoon Tom and I went down in the bucket and sampled each foot of thickness. As I stepped off at the top I was greeted by Mr. Skidmore: 'I want to congratulate you, Mr. Haven, and to say that all those who subscribed have agreed to double their subscriptions.' To which I replied, 'I am very much obliged to you, Mr. Skidmore, for your personal efforts but if you have collected the money, I wish you would return it to my friends as I think we will not need it.'

"The following Wednesday the Articles of Incorporation of the White Breast Coal & Mining Company were filed.

"Now a few remarks about the stockholders. Tom Potter at once told me that he had informed Mr. (Charles E.) Perkins that he was interested in the venture as he thought that the easiest way to avoid my repeated talks. Mr. Perkins informed him that he wished no one in the operating departments of the railway to be in any way interested in coal or other business on the line.

"Osgood, Fix and myself therefore agreed to take it off his hands, and pay as soon as any market prices were established. Said stock was soon sold to Mr. (Smith H.) Mallory at par, who kept it about a year when the same three bought it back, paying him 10 percent for the time his money was invested. Mr. Wesley Jones thought going into the mining business too risky as he had more money that all the rest of us put together, he might have the empty bag to hold. So he was simply, much to his satisfaction, repaid the money he had invested and Fix, Osgood and myself each held one third of the capital stock which cost us each $6,666.66 plus prospecting expenses for Fix and Osgood.

"What thereafter followed is another story. I want to make it plain how much Lucas county is indebted to that little bunch of miners who agreed to work without any certainty of pay and coal 'only 15 feet away.' "