The rest of the "Tombstone House" story ... 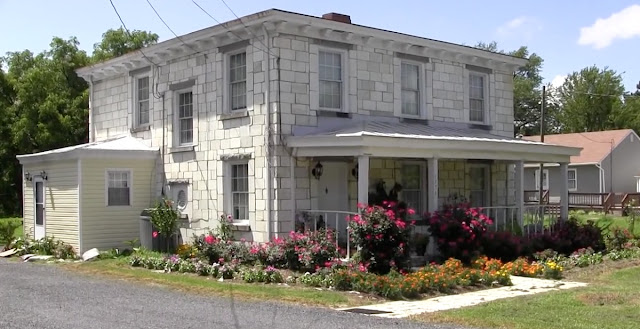 No, this odd looking Italianate-style house is not located in Iowa --- it's in Petersburg, Virginia, south of Richmond. But it caught my attention this morning after a couple of posts about it --- the "tombstone house" --- popped up in social media.

It's principal claim to fame, according to those articles, is that it's "constructed" from parts of tombstones once located nearby in Poplar Grove National Cemetery.

But "construction" is not exactly the right word. The home's owner, back in the 1930s, used slabs of government-surplus marble that had been cut from government-issue tombstones in the cemetery to reface an older home --- and to pave a sidewalk, too.

There's quite a bit more to the story, however --- and it has a happy ending that isn't included in these brief reports about the house. Poplar Grove National Cemetery now has been fully restored after decades of neglect and replacements for all the tombstones cut down in the 1930s have been secured and put into place.

The Petersburg National Cemetery contains the remains of approximately 5,700 troops, most of them Union, who died in the Siege of Petersburg --- a series of battles fought between June of 1864 and March of 1865 as the Civil War neared an end.

The graves originally were marked by wooden headboards, which deteriorated, and were replaced in the 1870s by government-issue marble. The graves holding identified remains (about 2,300) were equipped with upright markers; the 3,400 "unknowns" were identified by numbers carved into the tops of 6-inch-square blocks.

The cemetery remained as it was until 1933, when the U.S. War Department transferred responsibility for it to the National Park Service --- which didn't know jack about managing a cemetery.

The Park Service, troubled by all those pesky tombstones, decided to create an easy-to-maintain park-like setting by pulling up all of the upright tombstones, cutting off the long bases that --- slotted into the earth --- had held them in place, and dropping the inscribed 12 inches of these stones that remained flat on their backs so that they could be mown over. The blocks marking the graves of unidentified fatalities were buried deeper.

This was when the marble cut from the upright stones was sold as surplus to the homeowner who used it to reface his Petersburg home and create the "tombstone house."

So far as the cemetery was concerned, this was a disaster. The flat-on-their-backs tombstones deteriorated, some were broken and indifferent maintenance resulted it something that nearly everyone agreed was a disaster and a disgrace.

But finally, funding was secured for a full-scale $5.3 million restoration effort that began during November of 2015 and was complete by Memorial Day 2017. More than 5,700 markers were replaced with new stones --- and, in most cases, the older damaged stones were ground up so that they couldn't be inappropriately recycled. No more "tombstone houses."