Please note that all of the tombstone photographs here were taken by Carl Nollen for Find a Grave and all credit for them should go to him.

Chariton's John Kay married into a fascinating but by now largely forgotten family when he was wed to Martha Jane Jeffers at the home of her parents, Crudeup and Polly Jeffers, in Indiana Township, Marion County, on May 8, 1881.

The Jeffers were free people of color who had moved from their previous homes in southern Indiana to the Iowa frontier during 1848, some five years after eastern Marion County had opened to non-native settlement in 1843. They settled south of a village known then as Barkersville, now Attica, established during 1847.

There were three senior male members of the Jeffers family. Burrel (sometimes spelled Burl or Berl) was the oldest. According to his tombstone in Indiana Chapel Cemetery, he was born in Virginia Oct. 29, 1804, although census records suggest an earlier date, ca. 1800 or 1801. Burrel's wife was Sarah, known as Sally, born March 29, 1811, in North Carolina.

Next in order of age was Anderson Jeffers, born according to his Indiana Chapel Cemetery tombstone on April 15, 1813, also in Virginia. Anderson's wife was Mary Ann, born March 20, 1814, in North Carolina.

Burrel and Anderson may well have been brothers, although I have no proof of that. Each of these families had eight children by 1850, when a federal census was taken. They ranged in age from 15 to newborn.

The third and youngest of the Jeffers was Crudeup, born in North Carolina on April 15, 1826, according to his tombstone. He was 23 and single when the 1850 federal census was taken, living with the family of Anderson Jeffers. Crudeup could have been a son of Burrel, but again --- no proof. If so, he would have been part of a second, older family.

Prior to 1856, Crudeup had begun a family with Mary A. "Polly" Jeffers --- apparently the eldest daughter of Anderson and Mary and a cousin of some degree. They were living on their own nearby farm in that year with children Andrew, 2, and Elizabeth 1; as well as Nancy Jeffers, 18, and David Griffith, 8. Marion County marriage records show that Crudeup and Mary formalized their marriage on March 17, 1858. By 1860, they had two additional children.

Nancy Jeffers was Polly's younger sister; David Griffith, part of another "mulatto" family that had moved west from Indiana ca. 1848 and included during 1850 David, 23, a plasterer by trade, and Julianna, 37, who headed the family; and Mary Ann, 13, Nancy J., 10, Sarah M., 7, John, 5, David, 3, and Alexander, 1. This family seems to have been broken up by 1856, quite likely by death, and the children were scattered among other households, white and black, in the neighborhood.

All of these family member were identified as "mulatto" by census-takers, rather than black.

The Jeffers had come west from Indiana with sufficient resources to purchase land, and I've highlighted in yellow the locations of the farms they had purchased prior to 1860 as shown on an 1875 landowner atlas of Indiana Township (right-click and open in a new window to enlarge). 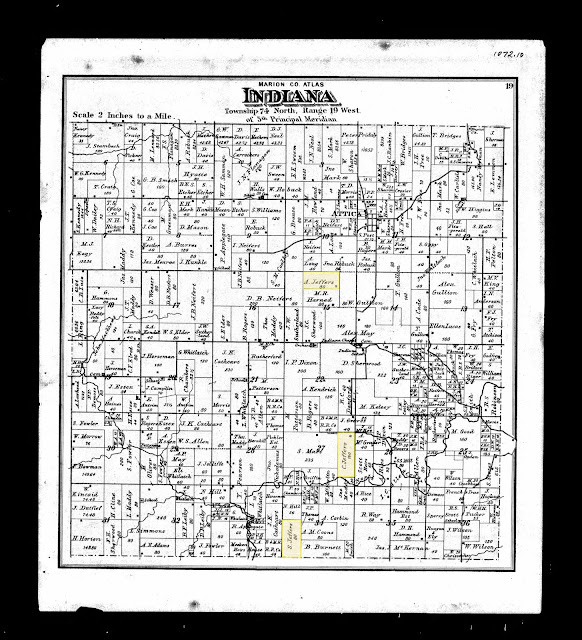 Anderson Jeffers apparently purchased his farm south of Attica from an earlier owner, but records show Burrel and Crudeup acquired their farms directly from the government, paying as all pioneers did $1.25 per acre. The Crudeup Jeffers farm was directly south of Indiana Chapel church and cemetery; the Burrel Jeffers farm (marked "S" Jeffers on the map because he had died during 1869 and the property now was owned by his widow, Sarah), on the south side of North Cedar Creek, right up against the Monroe County line.

The Jeffers families were as prosperous as most of their pioneer white neighbors in these early days. The fine tombstones that mark many of the family graves in the Indiana Chapel churchyard are one indication of that.

The Jeffers probably came to Iowa during 1848 from Orange County in southern Indiana. A "Birrel" Jeffers, his wife and three children, two sons and a daughter, were enumerated as "free colored persons" in Southeast Township, Orange County, in the 1840 census. This almost undoubtedly was our "Burrel." Only heads of households were named in the 1840 census; other family members merely noted by gender in age categories.

Southeast Township, by 1840, was the location of what today is called the Lick Creek African American Settlement, an area that in its heyday included about 1,500 acres owned by free black families and also known variously as Little Africa, South Africa and Paddy's Garden. This was a fully integrated area, however, and land owned by black and white pioneers was adjacent.

The first black families arrived from North Carolina --- point of origin for the Jeffers --- with sympathetic and supportive white Quakers who moved to Indiana in search of a land free from slavery. Free blacks in North Carolina were facing increasingly restrictive laws and mounting discrimination at the time. Quakers, who generally opposed slavery, were becoming increasingly unpopular and subject to harassment.

But black families who settled there faced a number of issues. In the first place, the land was wooded and not especially productive and that became an issue as families grew. There were few if any non-farm-related employment opportunities. The passage of the Fugitive Slave Act of 1850 brought increasing harassment from bounty hunters. And although Quaker neighbors were friendly and supportive, non-Quakers shared the racial prejudices prevalent among most white Americans at the time and tension increased as slavery became a major political issue across the land. Indiana's new constitution of 1851, although unenforceable, prohibited black people from settling in the state.

It probably was some combination of these factors, but certainly the search for more productive farm land, that caused the Jeffers to sell out in Indiana and invest in Marion County, Iowa, prior to 1850, perhaps following white neighbors who were moving west in sufficient numbers to cause a new township in southern Iowa to be named "Indiana" when it was organized.

Whatever the case, the three Jeffers and their wives all produced very large families and continued to live in the vicinity of Indiana Chapel throughout the 19th century. Burrel had died during 1869, but his widow, Sarah, continued to live on their farm until her own death on Sept. 10, 1884, and some of their children remained on that farm into the 20th century, the last Jeffers in the neighborhood.

Crudeup and Polly sold their Indiana Township farm about 1890 and puchased  80 acres in Pleasant Township, Lucas County, address Belinda, where they lived for a few years before old age and illness forced them to move to Knoxville. He died there Feb. 13, 1900, age 73. Polly outlived him, but her date of death never was inscribed on their fine tombstone at Indiana Chapel Cemetery, so I don't know when she died.


By the 1890s, three children of Crudeup and Polly were living and working in Chariton --- Martha, who had married John Kay; and her brothers, Andrew and Simeon, employed in various capacities between 1870 and 1900 by Lucas County's principal entrepreneur, Smith H. Mallory.