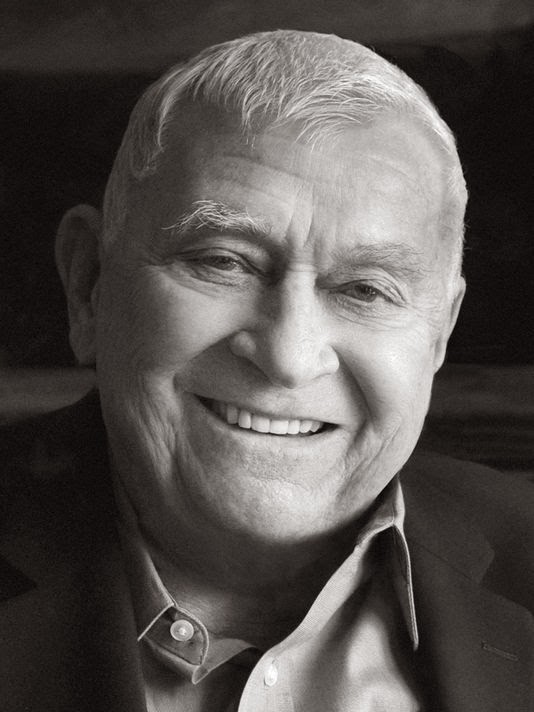 It's been good fun now and then to torture hapless heterosexual economic development types by suggesting that all any Iowa town with aspirations really needs is a gay gazillionaire --- like Centerville's Morgan E. Cline. Or Albia's savior, the late Bob Bates, perhaps.

Now, sadly, Mr. Cline has died --- unexpectedly on Easter morning, age 81, at his home in Middletown Township, New Jersey. He had shared the estate, Riverwind, with his partner of 52 years, Benjamin R. D'onofrio, until the latter's death in 2009.

Clueless Christian types still babble on about the "homosexual lifestyle" and share delusional speculations about choices that "lifestyle" involves.

For Cline, like the rest of us, sexual orientation was original equipment. His lifestyle choices were to work very hard, rise from poverty, become very rich, live graciously and generously --- and give his riches away.

The Centerville Daily Iowegian is carrying an excellent and very detailed obituary here. The Des Moines Register's Kyle Munson filed a good report from Centerville and Exline, which can be found here. Neither link is likely to be permanent.

Cline was born Aug. 26, 1932, on a farm near Exline, a small coal mining town southeast of Centerville, not far from the Missouri border, to Ogle and Lucile Cline.

In 1949, he graduated valedictorian with the final (seven-member) senior class of Exline High School and received a scholarship to attend Centerville Junior College (now Indian Hills Community College), which he did for a year.

He went on to study pharmacy at Drake University, graduating with honors during 1953 at age 20, then entered medical school at the University of Iowa. After two years, however, he enlisted in the U.S. Army and served as a pharmacist at Fort Dix, N.J., and Fort Jay, New York City --- an introduction to the region of the country that would be his principal home for the rest of his life.

After his discharge from the Army, Cline worked three years as a drugstore pharmacist, then entered the world of advertising.

Some 20 years later, after rising to the top while working for others, he co-founded the ad agency Cline, Davis & Mann with creative partners Clyde Davis and Fred Mann. Throughout his career, he had leveraged his pharmaceutical and medical background. That paid off lavishly in the new firm, where Cline was responsible for the advertising launches of both Viagra and Lipitor.

He also was a very talented real estate developer and redeveloper, specializing in returning historic properties to useful life --- more than 125 major projects in Hoboken, New Jersey, alone during the 1970s and 1980s.

During the 1990s, Cline's attention shifted to his home territory in Appanoose County.

Revitalizing The Continental, a near-derelict hotel on the east side of Centerville's square, was his first major project, undertaken in part to offer a secure home for his mother. It was designed to be a "concierge living" center for older residents with compact apartments above a quality restaurant, bar and other public areas on the first floor. It still provides those services, but continues to evolve to meet changing community needs.

Project followed project in rapid succession in Centerville during the years that followed. Many buildings on the square were rehabilitated for commercial use, the Majestic Theater complex (just off the square) among the most recent. The Columns, Bradley Hall and the Beck Mason were his most widely known residential rescues --- but Cline could not resist an historic home in distress and revitalized many others.

Preservation and revitalization projects that did not bear his personal imprint quite often benefitted from generous donations.

His benevolence included many projects not tied directly to preservation, however. He built the Continental at St. Joseph's, an assisted living center for those who needed more attention than could be provided at The Continental downtown, the Morgan E. Cline Family Sports Complex, the Cline Family Dialysis Center and, most recently, made a $1 million donation to Centerville's St. Joseph Mercy Hospital to help fund a new wing to be named in his honor.

In his tiny home town of Exline, Cline built and operated through his Cline Companies a new combination convenience store, cafe and antiques shop, funded various restorations and built a collection of homes for retirees --- returning life to a village with about 150 residents.

Munson, writing in The Register, estimated his investment in Appanoose County at $20 million, which seems a little on the conservative side..

In addition, Cline created a $5 million scholarship-endowment fund at Drake University for pharmacy students and donated an additional $3 million to Drake to fund the Morgan E. Cline Atrium for Pharmacy and Science.

In New Jersey, Cline and his partner were involved in various philanthropic projects, including a joint $3.5 million gift to the Monmouth Medical Center to fund the Cline-D'onofrio Emergency Services Pavillion.

Informal memorial gatherings for Cline were held on Thursday and Friday at Riverwind. In a few weeks, a more formal memorial celebration will be held at the Majestic in Centerville.

Cline and his partner, Ben D'onofrio, as they were growing older, commissioned similar mausoleums for their families. The D'onofrio mausoleum, where Ben is interred, is located in Moravian Cemetery, Staten Island. The Cline mausoleum is located on a hill in the Exline Cemetery, and Morgan Cline's ashes will be placed there with the remains of his parents.

His death will trigger activation of a new charitable trust that will make Appanoose Countyans the inheritors of his good works there --- and continue his benevolence.

This was a fantastic post. Thanks so much. I just discovered this remarkable story about Morgan Cline, and his life and passion for resurrecting Centerville. Not only was the story you told well done, but it was done with style and dignity. Thanks, again.