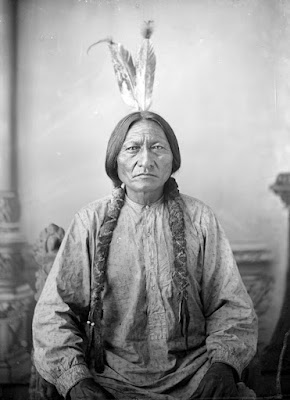 The mortal remains of Hunkpapa Lakota leader Sitting Bull (ca. 1831-1890) rest now near Mobridge, South Dakota, considered by many to have been his birthplace. But had circumstance played out differently, his might well have become bones of contention at Iowa's Keokuk National Cemetery.

To understand how that could have happened it's necessary to back up to December of 1890, when the famed leader was killed.

Sitting Bull's vision and leadership were instrumental in the stunning defeat of U.S. Lt. Col. George Armstrong Custer and his men of the 7th Cavalry on July 26, 1876, at Little Big Horn. Forced eventually to flee to Canada, Sitting Bull returned to the United States in 1881 with most of his people and surrendered. He then joined Buffalo Bill's Wild West show and spent some years as a performer before settling down on the Standing Rock Reservation, headquartered at Fort Yates, North Dakota.

During December of 1890, however, fearing that Sitting Bull was about to leave the reservation and join the Ghost Dance movement, James McLaughlin, U.S. agent at Fort Yates, ordered his arrest. Sitting Bull was shot to death on Dec. 15 during a confrontation at his home between non-Hunkpapa tribal police attempting the arrest and some of the men of his village, resisting it.

Looking most likely upon possession of his remains as a control issue, Sitting Bull's body was transported to Fort Yates and buried in the post cemetery, where it remained for nearly 18 years before a major controversy erupted.

In 1903, the fort and post were decommissioned and abandoned. Five years later, it was decided to empty the post cemetery and remove the remains of all buried there --- including those of Sitting Bull and other native people --- to Keokuk National Cemetery, a considerable distance away in southeast Iowa. The other option was what now is known as Custer National Cemetery at Little Big Horn.

The proposal to move Sitting Bull's remains resulted in considerable discontent among the Lakota people --- and a good deal of dithering by U.S. officials. Plus a few examples of cultural insensitivity --- the Smithsonian Institution and historical societies in both North Dakota and South Dakota suggested that the old chief's remains should be disinterred and passed on to them for display, according to newspaper reports of the time.

Eventually, common sense prevailed and it was decided to leave Sitting Bull's remains undisturbed at the post cemetery site. The remains of other natives buried there apparently were removed to nearby civilian cemeteries.

A St. Paul, Minn., undertaker was commissioned by federal authorities to disinter and rebox remains from the Fort Yates Post Cemetery. The remains, as well as the crated stones that had marked a majority of the graves, were transported upriver to Bismark and transferred there to a boxcar for the long rail journey to southeast Iowa.

HAVE ARRIVED FOR BURIAL

No Indians Among Them

Seventy-three of the Bodies Will be Placed in the National Cemetery and One Sent to St. Louis

The bones of seventy-four soldiers and citizens of the United States arrived in this city last evening from Fort Yates, North Dakota, an abandoned military post, and seventy-three will be buried in the National Cemetery and one forwarded to St. Louis to be buried in the National Cemetery at Jefferson Barracks. This last is the body of Major Gaddord (Maj. Charles E. Goddard), whose death occurred in 1886. The shipment arrived via the Burlington and after the arrival in this city was taken in charge by Undertaker E.E. Hawkes, who will have charge of the burial. The Grand Army of the Republic, Belknap Post, will have charge of the services which will probably be held at the National Cemetery tomorrow afternoon.

It was thought that the bones of fourteen Indians together with Sitting Bull would be brought for burial, but fear of a general uprising on the part of the Indians of North Dakota reservations, if the Indian bodies and that of the once famous Sioux chief were moved, changed the plans and only soldiers and civilians were removed. Among the boxes contained in the car are those having the bones of several children.

Separate Grave for Each

Each box will be placed in a separate grave, necessitating in all seventy-three graves. The graves are being dug in the new part of the National Cemetery and are in the west corner taking up a great deal of space.

The graves are in three rows, the first row containing twenty-eight graves, the second row twenty-eight graves, and the third row seventeen graves. Each grave is one foot wide, three feet long and three feet deep and are placed four feet apart. Several of the boxes, however, are five feet long and they will be placed in graves made of different dimensions than those above mentioned.

The entire seventy-four boxes containing the bones of the soldiers and citizens, and the fifty-six tombstones were all contained in one box car, and completely filled the bottom of it. The tombstones were enclosed in a wooden crate and upon the tombstone was an inscription containing the name of the deceased, the date of his death and his age, also, if he was a soldier to what post or fort he belonged.

The work of hauling the tombstones to the National Cemetery was begun this afternoon but it is thought that the burial services cannot be held before tomorrow afternoon at the earliest. The work of digging so many gave is quite a task and work could not be commenced before it was known what sizes the boxes would be.

The services at the graves will be conducted by the Belknap Post G.A.R. and if possible arrangements will be made to hold services tomorrow afternoon.

Proclamation by the Mayor

Tomorrow, November 12, 1908, the remains of eighty (sic) soldiers will be interred in the National cemetery at this place, being removed from North Dakota, where they were interred at time of death. I deem it proper that the good people pay a mark of respect to the memory of these hero dead during the hour of the funeral, which will be announced during the afternoon by the tolling of the fire bells. I would ask that all business houses be closed during the passage of the funeral cortege and that the flags of the city be placed at half mast. (signed) W.E. Strimback, Mayor

Last rites for the 73 refugees from Fort Yates were indeed held in Keokuk late on the afternoon of Friday, Nov. 13, as reported on Saturday morning, Nov. 14, as follows:

Yesterday evening there gathered at Eighth and Main street one of the largest funeral processions ever seen in the city --- that preceding the burial of seventy-three old soldiers and citizens removed from Fort Yates, North Dakota, to be interred in the national cemetery.

The memers of Belknap and Torrence posts, Grand Army of the Republic, the Fiftieth Iowa band, and many private citizens took part in the procession, together with the wagons containing the rmains of the seventy-three dead soldiers and citizens.

Slowly the funeral procession proceeded to the cemetery and at 4 o'clock the services began. Miss Mary Collins made the address of the afternoon. For several years she was a missionary to the Indians of Fort Yates and for this reason was selected to make this address. A prayer by the chaplain, Rev. Connoran, concluded the services and the bones of the departed were placed in the individual graves which are side by side in three rows.

Many business houses and public buildings had flags at half staff in respect to the deceased soldiers of the country.

The remains of Sitting Bull remained undisturbed in the old post cemetery at Fort Yates until 1953 when organizers of a plan to move his bones to a new resting place near Mobridge, South Dakota, obtained permission from his descendants to do so.

Today, Sitting Bull is honored by monuments both near Mobridge and at the site of his original grave at Fort Yates.