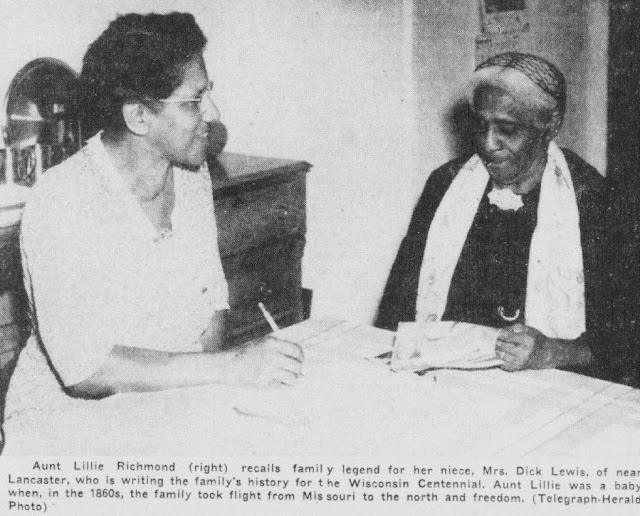 I wrote yesterday about Romulus R. Richmond, who arrived in Chariton from Grant County, Wisconsin, during 1887 with his wife, Lillie, and the oldest of their 10 children.

The youngest of those 10 children, Booker T. Richmond, was born during 1904 in Chariton and not long thereafter Romulus moved on, leaving Lillie with the responsibility of supporting and raising their younger children.

She did that by working as a cook. According to her obituary, she had worked 22 years in the C.B.&Q. Depot restaurant, then 25 years more in the nearby Railroad Cafe before retiring during the early 1940s.

The family home was on South 11th Street, a block east of where I'm sitting now --- kind of on the "wrong" side of the tracks in a town where the grander neighborhoods --- where the swell folks live --- are north and south of the square, rather than east or west.

During the late summer of 1947, Lillie set out to visit her niece, who still lived on the farm their fugitive-slave ancestors had purchased in Grant County, Wisconsin --- not far northeast of Dubuque, Iowa --- during the late 1860s. While there, she was visited by Mrs. David Chrichton, a correspondent for several area newspapers --- including the Dubuque Telegraph-Herald. The resulting story --- and photograph --- was published in The Telegraph-Herald of September 28.

Here's the text of that story:

Meet Aunt Lillie Richmond, an ex-slave and proud of it. Aunt Lillie was 85 on July 4 and, as she says, "All I know about slavery is what my folks told me. It's kinda like something out of a story book." But the familiar story told and retold among her own people, makes her heritage of freedom seem very precious. She was doubly proud also to have two of her sons in World War I and one in World War II.

Aunt Lillie's home is in Chariton, Ia., where she owns a comfortable house earned by 25 years of cooking in Maggie Downard's railroad cafe. When summer comes she gets a longing for her old home near Lancaster and there's always a warm welcome waiting for her at the Beetown township farm where three generations have lived, now occupied by her niece, Mrs. Dick Lewis.

Mrs. Lewis is writing for the Wisconsin Centennial a history of her people, some of whom have been in Wisconsin ever since it became a state in 1848. Aunt Lillie is helping her with the little details which come to mind about her arrival as she sits and quilts or mends. "She's a beautiful seamstress," says the niece. "When she comes I get caught up on my sewing like magic."

In Missouri, back in 1862, when she was born, Aunt Lillie relates, "freedom was sort of in the air. Black folks were sort of getting restless. Not that they weren't treated all right. They had no complaint. I've heard grandfather say so many and many a time. It was just that they were restless and wanted to be on their own."

So they saved and saved, pennies, two-cent pieces, three-cent pieces and nicklels and dimes, until one day, among them, they had $50. That was their stake, and a lot of money. That night, Grandfather John Green and Grandmother Lillie Green, and their five grown children, Hardy, Tom, Amy, Francis and Sarah, and grandmother's brother, Tom Smith, struck out for the north and freedom, walking all except baby Lillie, who was carried in her grandfather's arms.

Their immediate destination was St. Louis, where grandfather had gone numerous times with loads of apples. After walking all night one of the boys, by "hook or crook," Aunt Lillie says, came up with a team and wagon. Elated, they piled in, but their troubles were not over.

They were helped here and there by friends of the underground, but they also heard that the Bushwackers were on their trail. They made the best time they could but were beset with anxiety every mile of the way, for fugitive slaves were fair prey for a lawless element that roamed the countryside during the war years in Missouri.

Finally they reached St. Louis safely. Grandfather went to a man he had sold apples to for years and knew to be honest and friendly. "Grandfather said he wanted to ask a favor and the man said he would be glad to be of service. 'I want some one to see to it that this team and wagon is returned to the plantation,' Grandfather said."

"The man smiled and said, 'John, if you took a dozen teams and wagons it wouldn't pay you for what you justly have coming to you.' But grandfather would have none of that and made the man promise to get the team back to the plantation, which he did," Aunt Lillie said.

The Greens boarded a train, the first they ever had been on. They landed at Dunleith, now East Dubuque. They spent their first winter on a farm near Bloomington. Some of the boys fought in the Civil War. In 1870, they bought the homestead now occupied by Mrs. Lewis and her husband.

Aunt Lillie's husband, dead for many years, was Romulus Richmond. He studied for the ministry and preached for some years. They had 10 children, whose raising fell largely upon Aunt Lillie's broad shoulders. She is wise in the use of common medicinal herbs and homemade remedies. "I had to be," she laughs.

When the children were old enough she went to work in the railroad cafe, where it was nothing at all to turn out 30 or 40 pies in the forenoon in addition to regular cooking. Her smile was known up and down the line and there was genuine regret when she retired three years ago.

Lillie (Green) Richmond died at home on South 11th Street five years after this Wisconsin visit on May 30, 1952, just shy of her 90th birthday. She is buried in the Chariton Cemetery along with eight of her 10 children.
Posted by Frank D. Myers at 6:29 AM