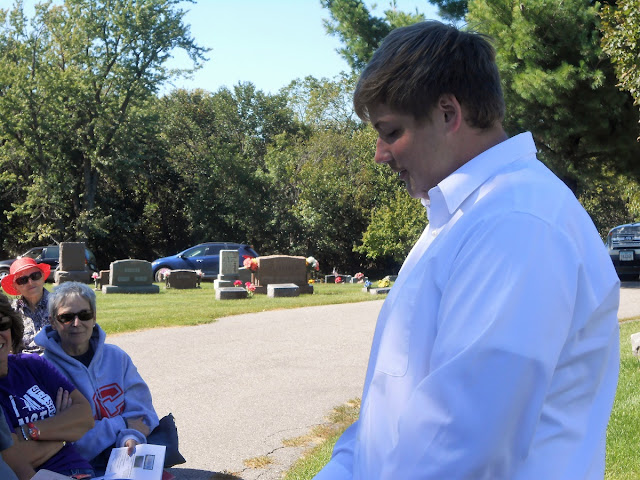 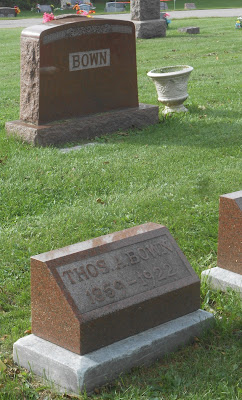 This is the second in a series of five presentations made during Sunday's 15th annual Chariton Cemetery Heritage tour. The presenter is Jesse Watkins. The surname, here at least, is pronounced just like you'd pronounce "Brown," but without the "r." We were fortunate to have Ron Ruddell, one of Dr. Bown's great-grandsons, in the audience on Sunday.

A CURSE ON THOSE horseless carriages you arrived in today, ladies and gentlemen. A curse! I am Dr. Thomas A. Bown, Lucas County’s first professionally trained veterinarian and for a time Iowa’s leading marketer of horses and mules. Those vehicles of yours were designed to put me out of business.

Although I do have to admit to finding automobiles useful during the second decade of the 20th century as I traveled across southern Iowa buying livestock.

I WAS BORN during 1859, long before such vehicles were available, in Somersetshire, England, and was 8 years old when my parents, Samuel and Eliza Bown, brought their family of 10 children to a farm near Streator, Illinois.

I grew up there and during the late 1880s, having decided that work with livestock would be my profession, was fortunate enough to attend and graduate from the Chicago Veterinary College, the Midwest’s finest, which had opened its doors during 1883. My younger brother, John, also was a graduate; and both of us turned our eyes west toward southern Iowa, then the horse capital of the Hawkeye state.

After graduation, I married Minerva Phillips during September of 1888 at Streator and the following spring we arrived in Chariton.

Brother John completed his studies in Chicago during 1890, moved west to Emporia, Kansas, for a year, then located at Knoxville during 1892 and practiced there for five years.

ONCE LOCATED IN CHARITON, I established an enduring business relationship and friendship with Addison H. McCollough, then 28 and proprietor of McCollough’s Livery Barn, located on the east side of South Main Street a half block south of the square. The building that houses Chariton Ford-Mercury is located there now.

I opened my office immediately in Addison’s livery barn and began to advertise for business, inviting those in need of my services to request them in person, by letter or by telegram.

I was a talented veterinary surgeon and my reputation soon spread across the region. I thought nothing of traveling to Princeton, Missouri, to assist with a surgical procedure on a prized stallion, or to Mills County in far southwest Iowa to do the same. I was trained and equipped to be a veterinary dentist, too.

Within two years, I had been named assistant Iowa state veterinarian for the southern district and traveled widely in this capacity, too, investigating reported disorders that ranged from hoof and mouth disease and hoof rot to hydrophobia.

DURING 1893, when First Baptist Church began to build its fine new brick church at the intersection of South Grand and Roland, I purchased the congregation’s old frame church and its quarter block lot just south of the current American Legion hall and converted the church into a barn and Lucas County’s first animal hospital.

Later on, the barn was moved to the back of the lot, extensions were added and Minerva and I built our home at the front of the lot. Our son, Keith, built a fine new brick and stone home there during 1939, so you still can drive by and see where we were located.

Addison and I, during those years, also began to buy horses and mules and develop markets for them in the East, shipping several carloads from the Chariton stockyards every year.

BY 1898, BUYING and shipping horses and mules was occupying so much of my time that I invited brother John to move from Knoxville and go into partnership with me in the veterinary firm. During 1901, I turned the practice over entirely to John, who practiced veterinary medicine in Chariton for the remainder of his life, and devoted my full attention to the McCollough and Bown partnership.

By 1907, we were Iowa’s largest buyer and shipper of horses and mules --- multiple cars leaving the stockyards every week for eastern markets, most notably Chicago and Buffalo, New York. Our business report for Jan. 1-July 1, 1907, for example, shows that we had paid out $249,000 to southern Iowa livestock producers during that period.

That year, 1907, also brought Lucas County’s greatest financial disaster --- the failure of the Mallory-owned First National Bank. Our business was not affected and early the next year I invested in and became an officer of the new Lucas County National Bank, which took over the bankrupt bank’s location and began a banking tradition that continued in Lucas County until it was sold Hy-Vee, now Midwest Heritage Bank, many years later.

We had suffered a setback, however, during March of 1905 when Addison, trying out a recently purchased horse, lost control of the inexperienced team and was thrown out of a buggy and against a stone wall. One leg was shattered and that handicapped him for the rest of his life. He continued to be active in the business, but it now became my sole responsibility to accompany carloads of stock east for sale --- up to 48 round trips to and from Buffalo, New York, alone during 1911 for example.

I HAVE TO TELL you one funny story here that dates from 1910. During September of that year, Andy Holmes --- the cigar-maker --- sold the family horse, old Bob, to McCullough and Bown and we shipped him off to Buffalo. Sometime after that, young Paul Holmes visited Des Moines, witnessed poorly treated old horses hitched to dray wagons there and got to worrying about Bob. A family council was held and the next thing I knew, there was Andy asking me to track down that old horse the next time I was in Buffalo and see if I could bring him home. I succeeded in finding Bob in a livery barn there and --- at considerable expense --- returned him to Chariton and the waiting arms of the Holmes family where he lived in peace until natural death overtook him.

MINERVA AND I became the parents of seven children during our life together in Chariton --- Marie, Harold, Edna, Dean, Keith, John and Dorothy. The great sorrow of our life was the loss of John at the age of 16 in 1916 following an operation for appendicitis.

As the years passed, Addison became less involved in the business and our sons, more-so. Harold was the first, but he went on to become a veterinarian himself and located his practice at Corydon, then Dean and finally, Keith.

After turning 60, I began to have a few health issues and struggled with a hernia, which did not seem to be a serious issue. But suddenly it became a critical one and I was taken to Methodist Hospital in Des Moines where, after a few days, I submitted to surgery and did not regain consciousness. I was 63 when I died on Sept. 16, 1922.

After my death, sons Dean and Keith formed a partnership that continued the family tradition, buying and shipping horses, mules and cattle for so long as they both lived --- Keith until 1949 and Dean until 1962.

I was very proud of my sons as they carried on the family tradition, establishing nationwide --- even international --- reputations as buyers and shippers of horses, mules and cattle, facilitating post-World War II recovery efforts in Europe and supplying dairy cattle to the newly formed state of Israel.

I still cringe a little, however, as those horseless carriages circle these cemetery driveways, once more accustomed --- like me --- to horses and buggies.
Posted by Frank D. Myers at 6:05 AM