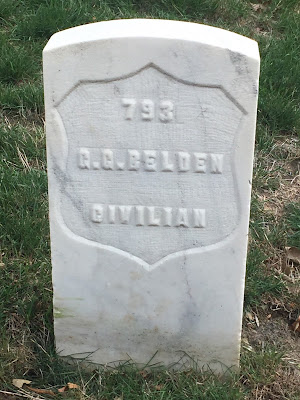 I've said, perhaps too often, that a cemetery is like a book waiting to be read in which tombstones serve as chapter headers. Case in point, the modest government-issue stone (left) at Keokuk National Cemetery that marks the grave of "No. 793, G.G. Belden, Civilian."

"G.G. Belden" actually is G.P. Belden --- George Pfoutz Belden --- whose murder on Sept. 1 or 2, 1871, not far from the west bank of the Missouri River near modern day Mobridge is among the oldest of South Dakota's cold cases. Buried first in the Grand River Agency post graveyard, George's remains were evacuated to the post cemetery at Fort Yates, North Dakota, during 1875. In 1908, his bones and those of 73 others were brought from Fort Yates by riverboat and rail to southeast Iowa for reburial.

I wrote yesterday in a post entitled "The White Chief's travels, in life and death" about the harsh circumstances of this young man's death at age 29. But who in the world was George Pfoutz Belden --- a popular literature phenomenon at the time of his death whose unfortunate demise burnished his image and boosted sales for at least two further editions of "Belden, The White Chief; Or Twelve Years Among the Wild Indians of the Plains, from the Diaries and Manuscripts of George P. Belden, the Adventurous White Chief, Soldier, Hunter, Trapper and Guide"?

Well for one thing, George was a gifted story-teller and careful observer with many talents who was blessed with an equally gifted editor, Gen. James Shanks Brisbin, a prolific author in his own right. By most accounts George also was something of an artist and an aspiring poet.

But all was not quite as it may have seemed to the thousands who eagerly read "The White Chief" before and after his death.

There were, of course, doubters at the time. And historians since have looked upon his work as more fiction than fact.

He most certainly was not a "white chief" among the indigenous peoples of the Plains, nor was he gifted as a teen-ager with a high-born native bride named Washtella. These flourishes were the marks of a work designed to appeal to a broad audience of white folks increasingly willing to romanticize native America without actually engaging or attempting to understand it.

Still, it remains quite difficult in many instances to sort fiction from fact in the life of this interesting, talented --- and slightly bent --- young man.

George was born in New Philadelphia, Ohio, in 1844, the eldest child of Seymour Belden, a lawyer and sometimes newspaperman, and his wife, Rebecca, nee Pfoutz.

It seems likely that George had a fairly conventional upbringing in Ohio, but in the opening pages of "White Chief" he begins to create a narrative for himself that begins, "at the age of thirteen (I) ran away from my parents to seek my fortune in the then almost unknown West.... How I got from Ohio to Nebraska is my own affair. Suffice it to say, that I was not yet fourteen years of age when I arrived at Brownville (Nebraska), then a small hamlet of log houses ... on the banks of the murky Missouri.... I made haste to write to my father, describing the valley, and urging him to move out. That he thought well of what I said, and relied somewhat on my judgement, is evinced by the fact that he came with his family and settled in Nebraska, where now stands the city of Brownville."

The elder Belden, George reports, started a newspaper and he acknowledges working on it, but then claims that two years later, ca. 1858, seeking adventure, he ran away from home, headed west and began his adventure-filled "12 years among the wild Indians of the Plains."

There's no doubt that the Belden family arrived in the Nemaha Valley during 1856 and that his father launched a newspaper called the Nemaha Valley Journal in November of 1857 at Nemaha City, then moved it two years later, during 1859, to Brownville. But there's no indication that the teen-aged George had served as pioneer scout for his family.

During early October of 1871, just after George's death had been reported in great detail in newspapers across the country and the autobiography he had created for himself in "White Chief" was being uncritically summarized and cited, an anonymous soul who signed himself "Brownville" wrote a letter to the Brownville Advertiser to set the record straight. Whoever this was knew George and a good deal about his family. It begins:

"The Omaha papers announce the murder of George P. Belden, by an Indian, near Grand river in Dakotah Territory, and give what they call a brief sketch of his adventurous life, "Twelve years among the Indians," &tc.

When the 1860 census of Brownville was taken, George, age 16, was enumerated as living there with his parents and four younger siblings. His occupation was "journeyman printer."

A year later, when the fictional George was roaming the Plains and consorting with his native bride , Washtella, the actual George enlisted on June 15, 1861, at Brownville, as a drummer in Company C, 1st Nebraska Volunteer Infantry for service during the Civil War. There's no mention of this in "White Chief."

Pvt. Belden served honorably in Missouri and elsewhere until late 1862 when he became critically ill with what appears to have been tuberculosis. After four months of incapacitation, he was medically discharged on March 21, 1863, at Ironton, Missouri, and returned home to Brownville to die or recover. Once home, fortunately, he recovered. But by this time, his father, Seymour was dead. Aug. 21, 1862, at Brownville, is usually cited as the date and place.

There are no known photographs of George, but we know something of what he looked like because he enlisted in a number of military units as the years passed and each time a physical description was given. When enlisting for the first time, in 1861, his height was given as 5-feet, 4-inches. That increased to 5-feet, 6-inches as the years passed. He was dark complected, slight, with hazel eyes and brown hair.

"Brownville," writing in The Advertiser after George's death, outlined the remainder of George's  military career very accurately, as follows, while attempting to set his record straight:

After George regained his health after his spring, 1863, discharge, he "enlisted in the 2d Nebraska, and was with that regiment at the battle of White Stone Hills (Sept. 3-5, 1863, in Dakota Territory). The 2d was a nine-months regiment, and when it was disbanded, Belden helped to organize what was called the Nebraska Battalion, in which he received a commission as lieutenant. In July 1865, the 1st Nebraska Volunteers and the Battalion were consolidated, and George remained in the service until July 1st, 1866, when the regiment was disbanded, and Belden returned to private life, but was shortly afterwards given a commission in one of the cavalry regiments of the regular army. This position he held about two years, when he again left the army."

That cavalry regiment was the 2nd, commanded by Gen. James S. Brisbin, and it seems to have been during this post-Civil War period that author and editor first met.

The National Archives and Records Administration is custodian of George's military records --- among millions of other documents --- and many of these are available digitally online. They record George's assignment and or detachment to a variety of military installations from September of 1864 until October of 1869, including Cottonwood Post (Fort McPherson), Fort Kearny and Omaha Barracks in Nebraska and Forts Fetterman, Phil Kearny and David A. Russell in Wyoming.

There also are indications that George, as he served as first a 2nd lieutenant, then a 1st, was not at all times a model soldier. On at least two occasions during those years, he was in custody at a post guardhouse and escaped court martial once for thievery on another occasion by reimbursing a fellow officer.

And truth be told, George and the military did not part friends. He was court martialed during the fall of 1869 at Fort McPherson and cashiered there on Nov. 4, 1869. I do not know the details because obtaining his court martial file from the National Archives, while possible, would be time consuming and a bit beyond the scope of this modest undertaking. So I have no idea what his offenses were.

However, the fact that he left the U.S. Army under less than favorable conditions never is mentioned in publications attributed to him nor in articles written about him at the time of his death two years later.

Following his less-than-honorable discharge, George returned to Omaha and was living there when the 1870 census was taken, working as a "clerk on the Omaha Republican" newspaper. From Omaha, he headed upriver to Sioux City and worked there for The Journal and perhaps other newspapers  before heading west into the Dakotas, where the end would come during September of 1871.

It also was during this period, 1869-70, that George and Gen. Brisbin began to collaborate. Brisbin began by marketing stories of adventure on the Plains authored by Belden and edited by himself to eastern newspapers, including The Chicago and New York Tribunes.


Brisbin and Belden also began to compile the first edition of the massive 500-plus-page "White Chief" that would be published in the fall of 1870 by C.F. Vent,, Cincinnati and New York.

Although Brisbin insisted when introducing this best-seller that he had remained true to Belden's words he freely admitted to rewriting George's work when necessary and providing the bridges that tied the whole thing together in a relatively coherent narrative.

"White Chief" still can be purchased as a reprint and read for free at various places online, including Google Book, so you're welcome to judge its veracity yourself.

Following George's sensational death in September of 1871, a new edition was rushed into print by C.F. Vent and issued during 1872. It was a best-seller, too.

Ten years later, Vent and Brisbin issued another edition of what by now was considered a classic adventure story of the old West. This time, however, the title had been considerably changed.

It reads, "Brisbin's Stories of The Plains or, Among the Wild Indians, Chiefly from the Diaries and Manuscripts of George P. Belden, the Adventurous White Chief, Soldier, Hunter, Trapper and Guide." Our friend George now has second billing.

As for George himself, as recounted previously, his bones now rest permanently in Iowa's Keokuk National Cemetery. How much of his life was fact, and how much fiction? Who knows? But the little guy deserves some respect, so if you're in the Keokuk neighborhood, stop by the cemetery and say "hello."

"Brownville," writing for The Brownville Advertiser after his death, summed our friend up this way: "All the old residents of Brownville recollect George as a reckless, daring boy, previous to the war. Belden was a talented man, and had it not been for his roving, unsettled character, would have made a first class engineer and draughtsman. Many of the sketches of Western events that appeared in the pictorial papers during and in the (Indian) war, were the productions of his pencil, 'sketched,' as the papers said, 'by our own artist on the ground.' Poor George! The worst enemy he had was himself."