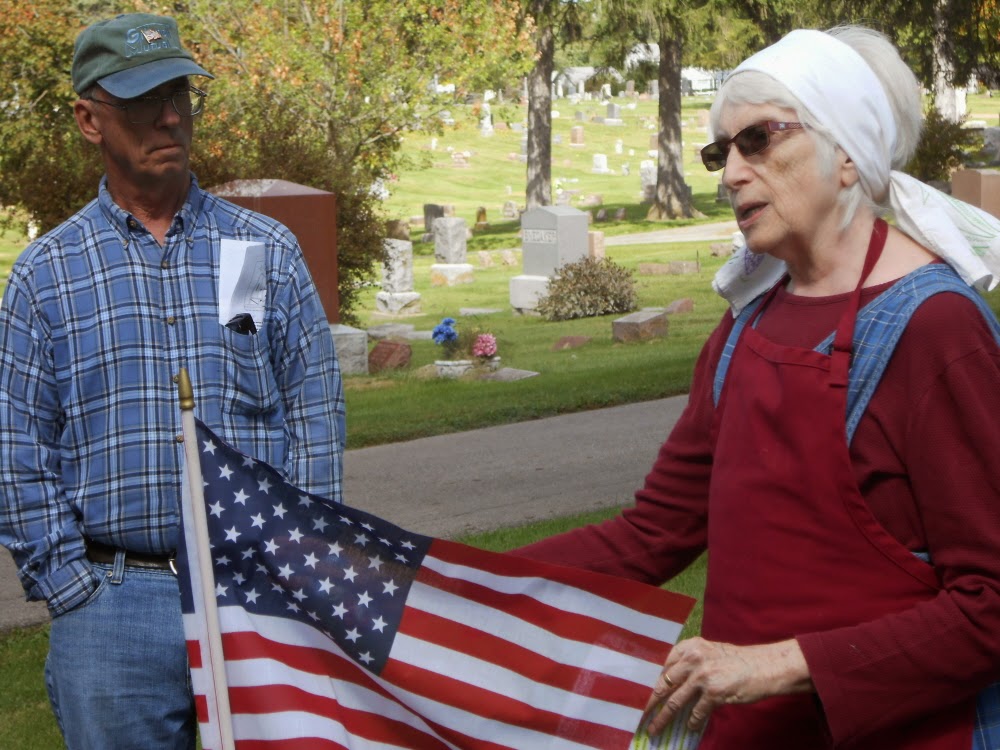 We couldn't have asked for better performers, a better crowd or better weather Sunday afternoon for the 11th annual Chariton Cemetery Heritage Tour, sponsored by the Chariton Historic Preservation Commission.

For the benefit of those who couldn't be with us, I'll post as the week goes on the scripts that Ev Brightman (Lizzie Crips), Larry Hirschy (Samuel B. St. John), Dave Kuball (Henry F. McCollough) and Brad Krutsinger (Orliff A. Clark) used as the starting points for their presentations, starting with Lizzie.

My full name is Mary Elizabeth Crips. I don’t have a tombstone --- so I have to tell you that. I put up a nice stone for my husband, John, in 1924. When I was buried beside him 10 years later, my heirs found other things to do with the money. A tombstone was not on their agenda.

We came by train to Chariton in 1884, alighting at the old C.B.&Q. Depot, and opened a cafe on the “levee,” just west of the depot. We both worked hard --- and prospered. So much so that in 1887 we built a two-story brick building to house our business.

When we sold the business 22 years later, the front door had never been locked. We had been open 24 hours a day, seven days a week, 365 days a year all those years. Railroad workers were the biggest share of our customers, but travelers, salesmen and townfolks ate with us, too.

During those first years, I worked beside John --- but we also adopted a little girl named Martha during 1884 and I began to take more time off to spend with her --- and became very active in community. I was a mainstay of First Baptist Church and an early member of the Chariton Improvement Association, strong women who took on improvement projects like parks and sidewalks that our menfolk thought unimportant. In 1895, I became a regional organizer for the Royal Neighbors of America, the largest women-led life insurer in the country and a pioneer in the field of financial planning for women. I served as district deputy to the Royal Neighbors Supreme Oracle for many years and organized many chapters across southern Iowa.

I also was a charter member of the Chariton Free Public Library Board, serving from the time the new library opened in 1904 until my death. In I donated the plaster relief entitled “Alexander’s Triumph” still located above the library fireplace. In 1903, John and I built a new rather grand new home at 734 Auburn Avenue for ourselves and our daughter. Life was good.

In 1907, however, our lives fell apart. During December of that year our beloved and accomplished daughter, Mattie, suffered an attack of appendicitis while visiting in Nebraska and died of peritonitis. We buried her in the Shaul Cemetery at Ottumwa after funeral services here.

During February of 1908, John suffered a metal breakdown --- the cumulative effect of too much work, too much grief and the fact we had lost a good deal of money in the collapse of First National Bank not long before Mattie’s death. He was judged insane and sent to the asylum at Clarinda. I was able to sell the cafe during March, took John west to Colorado for a few months to recuperate after his release in June and then in September, we returned home. John lived for 16 more years, but really was never able to work after that.

We lived for a time on rental income and by taking in boarders, but in 1912, when Will Kull built a new two-story building faced in white brick on the east side of the square, I became his first tenant. I opened the White Front Café on the first floor in February of 1914 and the White Front Hotel upstairs, extending into the second floor of an adjacent building.

If was a good business, and it prospered --- so much so that when George Larimer built what you know as the Charitone Annex in 1917, he asked if I wanted to be his first tenant. So I kept the “White Front” name and moved into a brand new building --- faced in red brick.

I operated the White Front there until William Junkin and his son-in-law, Henry McCollough, decided to the build the Hotel Charitone in 1922-23 and bought the Larimer building, as well as the vacant lot on the corner to the west. My husband, John, had become very fragile, so it was just as well. I cared for him until he died during 1924.

In 1925, however, I re-opened the White Front Café on the first floor of the Annex, where upstairs rooms now were part of the Charitone. Our motto: “A good meal for 35 cents.”

I sold the White Front and my household goods in 1928, planning to retire. But after a winter in Ottumwa and months of travel, I was bored and came home to Chariton in the spring of 1930 where I rented upstairs apartments on the square and put my cooking skills to use again making doughnuts and pastries, marketed directly and through the Yengle and other markets.

But finally, during the summer of 1934, my heart gave out and I made my final batch of doughnuts. On Sunday evening, Sept. 9, 1934, I died in my apartment above what now is Ben Franklin and was laid to rest here after a long and busy life.
Posted by Frank D. Myers at 6:15 AM