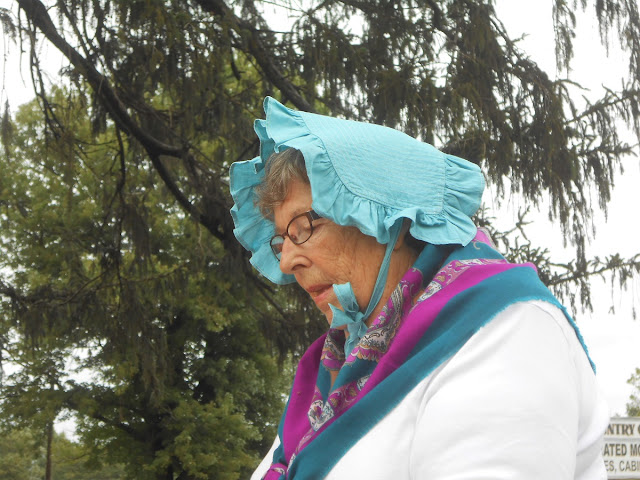 This is the fourth of six scripts used Sunday during the 16th annual Chariton Cemetery Heritage Tour, sponsored by the Chariton Historic Preservation Commission. The subject is Ellen Berry Badger; the portrayer, Jaynane Hardie.

Gather round and I will tell you how it was to be a pioneer, to leave home and everything familiar behind; to travel west in a covered wagon through Indiana and Illinois, across the Mississippi and --- finally --- to arrive here, in Chariton, Iowa, on a beautiful October afternoon in 1853.

My name is Ellen Berry Badger and I was 12 on that Thursday morning, Sept. 15, 1853, when we finished loading our two wagons, met our traveling companions and just before noon pulled away from Heltonville in Lawrence County, Indiana.

My mother had died in childbirth when I was 3 and my father remarried, moved away and started a new family --- so I was living with my older sister, Lucretia, and her husband, Isaac Julien. Our family party that long ago morning consisted of Isaac and Lucretia; my brother, Aleck, who was 20; Isaac’s brother and sister-in-law, Jacob and Amanda Julien, and their 2-year-old son; and Rene Julien, father to Isaac and Jacob.

We had packed all of our belongings into two wagons pulled alternately by two teams of horses and one yoke of oxen. When horses weren’t pulling they were ridden by the men, playing cowboy as they herded our cattle.

Altogether, there were 18 of us traveling west together to Iowa that fall in six wagons and two buggies with 35 loose cattle, four yoke of oxen, several horses and three dogs, including my little black pup called Mink.

The trip across Indiana and Illinois was mostly uneventful and we reached the Mississippi River at Warsaw, Illinois, on or about Oct. 1 and discovered that there was a steam ferry --- the first we’d ever seen --- to take us across to Alexandria, Missouri. Keokuk --- then the gateway to Iowa --- was visible just upstream. It took several trips to get us all across, then once in Keokuk, we turned west on the old Mormon Trail, bound for Lucas County.

My sister, Susannah, and her husband, Jim Mitchell, had settled at Chariton two years earlier and we had written to tell them that we were on our way.

As we crossed Iowa, our traveling companions left us family by family, bound for other destinations in Appanoose and Marion counties. So when we reached Cedar Creek in Lucas County on Saturday afternoon, October 8, our wagon --- with only Isaac, Lucretia, Alec and myself aboard --- was alone.

There was some timber by the creek and it was a wild looking place. We stopped near a saw mill but there was no one about, not a house in sight. The leaves were falling but there had been no frost. We were very lonely and some afraid of horse thieving.

That night, we spread our beds before the campfire and got the wagon with the horses tied to its back as near to the fire as was safe. Then slipped off our shoes and laid down, Isaac and Aleck with their hands on their guns.

We didn't sleep much and on Sunday at the first sign of daybreak we were up, feeding the horses and getting our breakfast, and were early on the road to Chariton. It was a beautiful day, but so lonesome. Aleck walked all the time with gun on his shoulder, expecting to get a shot at a prairie chicken. I walked most of the time, too.

This was October 9th and was the twenty-fourth day on the road. I can't remember how many houses we passed between Cedar Creek and Chariton but remember it was mostly a sea of waving prairie grass.

About 3 o'clock in the afternoon we reached Chariton. As I remember it, there were two stores on the northwest corner of the square, Hill's store on the west near the corner and James Wescott's store on the corner on the north. Palmer's store and Vansickle's grocery may have been on the east. I can't just remember.

The old log court house was on the east side, two stories high with the stairway on the outside and on the south side of the building. It served for the courts and was all the place there was for church services. I have attended church there many, many times. Upstairs was a lodge room.

When we got through town, Cyrus Scott on horseback overtook us and he recognized us and told us we were on the right road. He galloped on ahead and told them that the prairie schooner back there contained the Juliens and the Berrys.

We soon came in sight of Jim's and Susannah's cabin. The sun was up quite a ways yet, not many had clocks or watches; we just guessed the time of the day by the sun when it shone and when cloudy by guess, and at night by the moon and stars

Sister was expecting us any day and soon saw our prairie schooner coming her way. She was alone with her two children, Joe, five years old, and Eliza, about two, Jim having gone to Keokuk for a load of goods for the Chariton merchants and to get winter supplies for their families. All dry goods and groceries had to be hauled in wagons from those river towns. It took five or six days to make the trip.

Sister kept coming to her door to watch our wagon as it drew nearer. Sister Lou and I got far back in the wagon so she could not see us. She had never seen Isaac and Aleck was far behind trying to get a prairie chicken. When we drew up to the house she was standing in her door. Isaac asked her if we might camp there someplace. "Well," she said, "I'll have to see who is in that wagon before I tell you." She kept coming nearer and we had to show up who we were.

Oh, the joy of this meeting! Here words fail in power of expression. Long distances in those days between us and our loved ones had a far different meaning from what it does in this day when it is only a matter of a few hours of comfortable travel, under shelter, and reclining on cushioned seats.

Well that was our journey to Chariton. I could tell you much more about life here in the 1850s and 1860s, but that will have to wait for another time.

I continued to make my home with sister Lucretia and her family into the mid-1860s, helping out as best I could.

On the evening of Christmas day, 1866, I was married to Samuel Badger, some three years my junior and battle scarred after three years Civil War service with the 34th Regiment of Iowa Volunteer Infantry.

We lived first on a rented farm near Chariton, then moved to our own land east of town in Cedar Township where many years were spent and where our three children, Emma, John Cyrus and Clara Belle grew up. We prospered, finally moving in 1915 to a lovely home with several acres on East Auburn Avenue in Chariton.

But there were sorrows, too. Our son, John, was born disabled, and while never a burden neither could he have hoped to live an independent life. He died at the age of 22 in 1893.

Samuel and I had been married for 57 years when he died at age 81 during August of 1924. Neither of our daughters had married, so as I grew older they took care of me. I died during August of 1934, a few days short of my 94th birthday. Clara and Emma continued to live in Chariton until their deaths, respectively, in 1950 and 1954.

Our family circle is complete again now, here in the Chariton Cemetery, in death as it was in life, surrounded by so many who were our neighbors during those pioneer days. 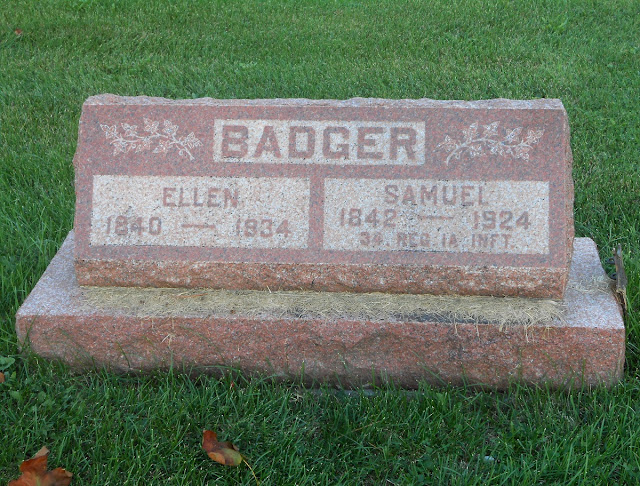