The end of "Honest John" Edwards 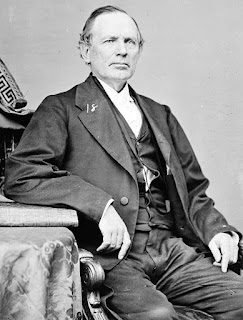 John resigned his position as aide-de-camp to Gov. Samuel Kirkwood on June 20, 1862, as Iowa's home guard organization was being formally organized, to accept a promotion to full colonel and command of the 18th Iowa Volunteer Infantry.

He served in that position in a distinguished and able manner, leading the 18th through many engagements in Missouri and Arkansas, and at war's end was breveted a brigadier general. For better or worse, one of his biographers described him after the war as "able and honest" but "not a brilliant man."

Edwards ended the war in Fort Smith, Arkansas, and rather than return to Iowa, remained there after the war. In 1866, he accepted an appointment from President Andrew Johnson as U.S. assessor of internal revenue and served as such from August of 1866 until May of 1869.

During 1870, Edwards was prevailed upon by members of the liberal wing of the Arkansas Republican party to seek the Third District seat in the U.S. House of Representative, challenging incumbent Thomas Boles.

Although Boles seemed to have won the election by some 3,000 votes, Arkansas Gov. Powell Clayton, playing politics, declared Edwards the winner and issued a certificate of election to him. John assumed the seat in Washington, D.C., at the start of the 42nd Congress.

Boles challenged Edwards' election, however, and the House Committee on Elections ruled in his favor. Edwards accepted the verdict and turned his seat over to Boles during February of 1872.

After that, Edwards practiced law in Washington, D.C., and as the years passed accepted a variety of public appointments. The combination allowed him to lead a comfortable life in the nation's capital.

Years earlier, John had moved to Chariton from Indiana following the 1853 death of his first wife, Eliza Jane Knight. He brought with him seven children from that marriage, one of whom, Mary, died in Chariton during 1856 at the age of 14 and was buried in what we now call Douglass Pioneer Cemetery.

Soon after his arrival in Chariton he married Catherine Whisenand, some 15 years his junior, and they had three additional children, Nancy, Clarence and Edward.

Prior to 1870, however, that relationship seems to have broken down and Catherine had moved her children back to her native Indiana. She seems never to have joined John in Washington, D.C., and they were divorced in Indiana during 1879.

During April of 1880, John married for a third time --- in Washington, D.C., to Mary Ellen Burland Bevans, who was 20. John was 65 at the time. They became the parents of two daughters, Frances and Mary Ellen.

John Edwards died at his home in Washington, D.C., on April 8, 1894, at the age of 78, having outlived all but four of his 12 children and two earlier wives.

The circumstances of Edwards' death and burial at Arlington National Cemetery were shared with old friends in Lucas County in The Patriot, which he had founded 40 years earlier, via excerpts from a letter written by Jacob C. Peacock, another Lucas County pioneer who once had served under Edwards' command in the 18th Iowa and later accepted an appointment to the U.S. Pension Office in Washington, D.C. The letter was written to another old friend of both, Edward Ames Temple, then living in Des Moines and heading up the Bankers Life Association (now Principal Financial Group), which he had founded in Chariton during 1879.

"My Dear Temple --- I hasten to drop a line to let you know that Honest John Edwards departed this life so quietly (that his family did not know he was dead) on Sunday evening last (8th inst.) at 5 o'clock. Thus, one by one the old vets of the "blue" pass over in rapid succession. I was glad to be one, at least, of the boys of his old command --- the 18th Iowa Infantry --- in at his last on earth, and today at Arlington Heights, Va., the Masons and G.A.R. men laid the body of "old John" away forever, 'neath spring grasses, under sodden clods and coulds, for it has rained incessantly for the past 24 hours.... He leaves a wife, and two beautiful little girls, eight and eleven.... But 'so moves the world away. The old commander is gone, peace to his ashes.' it appears he enjoyed your visits and company more than any of the other Iowa people. Yours, J.C. Peacock."

John and Mary, who died during 1932, rest beneath an impressive stone in a section of Arlington that looks a good deal like a civilian rather than a military cemetery. Emblazoned across the top is "Patriot," which presumably was intended to characterize his life and not as a reference to the newspaper he launched in 1857 in Chariton, still published weekly although with "Herald" now appended to its flag.

Your article has an error that needs to be corrected. The name of the Iowa governor is Gov. Samuel Kirkwood, not Kirkweed.

Thanks for your work.