The Underground Railroad at Melrose: Part 2 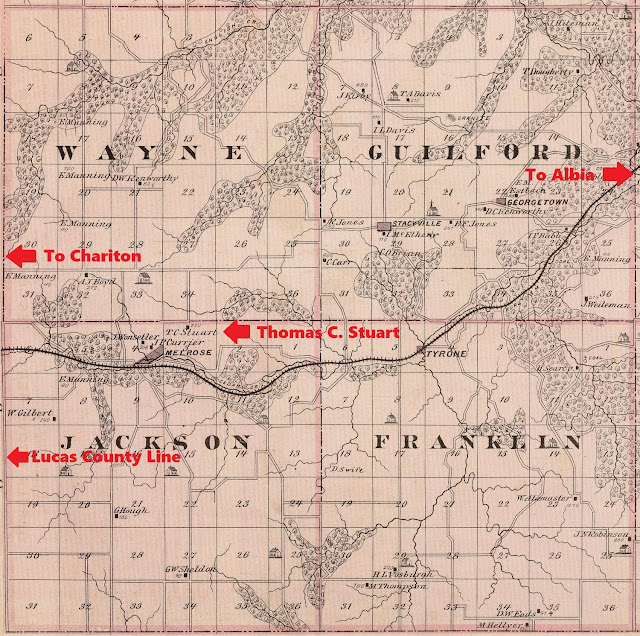 "My father stood his ground," Alpheus R. Barnes wrote of Andrew Curtis Barnes some 60 years after the latter --- editor, publisher and printer of Monroe County's first newspaper --- publicly declared his abolitionist stance in the first edition of The Albia Independent Press on Oct. 10, 1854.

What the senior Mr. Barnes would not have shared publicly was the fact that for the next several years he would serve as "station agent" for the Underground Railroad in Albia, assisted by his son.

Some 15 miles to the west, Thomas C. Stuart, his wife, Philomena Philadelphia, and their children --- who settled there during the next year, 1855 --- would have been equally secretive.

The Underground Railroad relied on secrecy to function. All who participated were violating the law --- the Fugitive Slave Act of 1850 --- and were subject to arrest and prosecution. Southern Iowa was divided, bitterly in some cases, about the issue of emancipation and neighbors could not necessarily be trusted. And "border ruffians" and bounty hunters always were a threat, real in some cases, merely perceived in others.

Thomas, prosperous farmer and merchant, became the agent at Melrose of an Underground Railroad station that, according to Alpheus, was the "main route (in Monroe County) for slaves hunting their way to freedom."

The Stuarts had lived briefly in central Illinois' Piatt County immediately before moving west into Iowa, but were originally from Zanesville, Muskingum County, Ohio, where the Ohio Anti-Slavery Society had been organized during 1835. Thomas, born in 1803, was a Pennsylvania native who had moved into Ohio as a young man.

Thomas and Philomena brought seven children with them to Monroe County --- sons Theodore M., Thaddius S., Thomas B. and Adelbert (always known as "Dell"); and daughters Brinetta, Arminta and Isadore. Their youngest child, Frank Q. Stuart, was born at Melrose during 1856.

According to Monroe County's 1878 history, Thomas also opened the first store in Melrose --- during 1860 --- and served the community as its second postmaster. The Stuarts were members of the Methodist Church organized at Melrose during 1856.

Fortunately for us, Thomas also was a patron of the 1875 Andreas Atlas of Iowa, so the site of his farm which presumably served, too, as the Underground Railroad station, is indicated on the map at the beginning of this post.

Four of the Stuart sons --- Theodore M., Thomas B., Dell and Frank Q. --- became attorneys and rose to considerable prominence in southern Iowa and beyond during the post-war years. Theodore M. launched a family legal tradition in Chariton that continued until 2010 when his great-grandson, federal district court judge and former Iowa Supreme Court justice William C. Stuart, died.

Alpheus R. Barnes knew all of the Stuarts and, during 1900, writing for The Albia Union --- which he now owned, published and edited --- did a little reminiscing about the Underground Railroad years in relation to the Stuart sons. These brief paragraphs were picked up and republished in Chariton newspapers.

On January 12, 1900, The Chariton Democrat reprinted the following from The Union: "Albia was a station on the underground railway, and the father of the editor of the Union made frequent trips to Oskaloosa in the night time to pilot runaway slaves toward freedom. Another route was by way of Melrose and the rendezvous was the home of Thos. Stuart, father of T.M. and F.Q. Stuart of Chariton, a short distance from that place.

"On one occasion we made a trip from Albia to Melrose, in company with our father, to put a big colored man on that track so that he could precede or overtake another colored man who had gone on that route, and we remember that the night was chilly, the horses poor and jaded, and constant fear was felt lest those who were thought to be pursuing would overtake and capture the fugitive. Nor did we then dream that four years of war would come to wipe out the crime of slavery."

On April 26, 1900 --- after Frank Q. Stuart had joined T.M. Stuart's Chariton practice, The Democrat picked the following up from The Union:

"F.Q. Stuart has been admitted to the law firm of Stuart & Stuart at Chariton. The firm is now composed to T.M. Stuart, his son C.W., and his brother F.Q. The father of T.M. and F.Q., Uncle Tommy Stuart, was a pioneer north of Melrose, and he was one of the brainiest and best men to locate in Monroe county. He was an ardent abolitionist and his house was a station on the underground railway preceding the war of rebellion."

Sadly --- for us --- Alpheus R. Barnes seems never to have written an extensive account of his Underground Railroad experiences. I've found only scattered references like these. Nor did the Stuarts --- apparently bedazzled by the lawyerly constellation of the sons --- celebrate the abolitionist record of their patriarch, who died at Melrose at the age of 85 on Dec. 8, 1886. His wife, Philomena, had died the prevous year and both are buried in the old Methodist Cemetery on the north edge of Melrose. 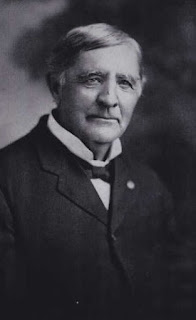 But an odd thing happened to Alpheus R. Barnes (left) late in life when, during 1912, he decided to seek the Republican nomination for state representative from Monroe County.

There were three contenders for the Republican nomination that year, Alpheus, a man named E.C. Sloan --- and George H. Woodson, a black attorney then practicing at Buxton. Woodson (1865-1933), lawyer, politician and activist, was a giant among men when it comes to compiling Iowa's black history.

In this instance, Woodson handily defeated his two white contenders for the nomination, thus becoming the first African American nominated to the state legislature in Iowa history. He received 1,177 votes in Monroe County, compared to 929 for Sloan and 533 for Alpheus. (In the general election, the white Democrat candidate Charles H. Clark --- who had received only 397 votes in the primary --- captured the seat by a margin of more than 1,000 votes.)

Alpheus did not take his primary defeat at all well and, now retired, penned a snippy letter whining about ingratitude, that was published in The Albia News and reprinted in The Chariton Leader. Here's how it reads in part:

"My candidacy for the legislature was based on the support voluntarily rendered me by old soldiers and citizens of splendid reputation and not one of them was actuated by other than pure motives. Out of twenty-one old soldiers who were in my office on Saturday, 18 said they would not support the colored aspirant before or after the primary, and they said my candidacy for the office would result in attracting to me the most intelligent people of the colored race, when they were apprised that my father was the most prominent abolitionist in Monroe county in slavery days; kept the station of the underground railway in Albia, and four years of my life had gone toward releasing the colored men from bondage. They have forgotten in their scramble for an office for one of their race, and haven't sense enough to know that he was urged by some to stand as a candidate to be the bellwether to lead the flock to vote for the ticket upon which his name was placed with no purpose to elect him.

My nomination papers were signed by many old soldiers and the best citizens of the county without solicitation on my part --- I knew that my aggressive fight against grafters and law breakers in the past, and men who thrive most when litigation is the rule, would oppose my election, both at the primary and at the election, but I counted that the law respecting people of Albia, especially, and of Monroe county, would vote solidly for me. In this I am greatly deceived, and feel humiliated, and frankly say so. Accepting the expression of the voters as indicating a new order of things in the county with which I will be in constant  protest I would sooner move out."