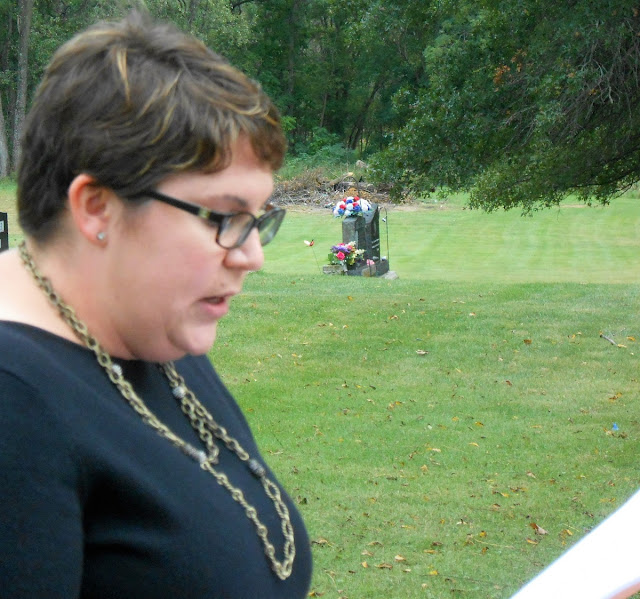 This is the third of five occasional posts that consist largely of the scripts used on Sunday, Sept. 25, during the Chariton Historic Preservation Commission's 13th annual Chariton Cemetery Heritage Tour, "Stories from Potter's Field."

In this instance, we had no one who appropriately could portray Eliza Ann Carter, a matriarch of Chariton's late 19th- and early 20th-century black community who was born into slavery --- Chariton is diversity challenged and our black community has vanished. So Kylie Dittmer kindly agreed to portray Pearl Lewis, a Lucas County journalist whose 61-year career in Chariton stretched from 1884 to 1945, and to tell Mrs. Carter's story as a reporter might.

In addition, while everything here is fact-based, the facts are linked in many cases by conjecture --- so please keep in mind that this and the other cemetery tour scripts are stories, not history.

I am Pearl Lewis, invited here to tell you about my friend Eliza Ann Carter. Until she died in 1923 after more than a century of life, Mrs. Carter was the matriarch of Lucas County’s black community. Most of us --- black and white alike --- called her “Auntie Carter.” She rests here in Potter’s Field with her daughter, Harriet, because neither had any money when they died.

Eliza has asked me to tell her story. Born into slavery and never afforded the opportunity for an education, she always had “kindly words of greeting for all,” as her obituary put it, but she was not accustomed to public speaking. Nor could she read or write.

When I retired in 1945 as society editor of The Chariton Leader and The Herald-Patriot, I had been a practicing journalist in Chariton for 61 years --- longer than anyone else before or since.

I went to work as a typesetter in the offices of The Chariton Democrat during 1884, the year after Eliza and her family arrived from Virginia. And I knew her well from about 1889, when she moved into Chariton from the coal mining camp of East Cleveland, until her death. In fact, there was very little about Chariton and its people that I did not know back then.

Mrs. Carter was born a slave in Albemarle County, Virginia, on May 17 in about the year 1821. She probably was about 102 when she died. Yes, I know that some newspaper reports gave her age as 112. But that was Eliza having a little fun --- and both she and I knew better.

But truth be told, Eliza didn’t know exactly how old she really was --- slaves, including Eliza, were purposely kept illiterate and black families often were broken up when members were sold. There are very few written records.

She was born on the plantation of a family named Blue, and so at first was known as Eliza Blue. About 1833, when she was 12, she was put up for sale on the auction block of the slave market in Charlottesville, Virginia, just across from the courthouse. Thomas Jefferson had died only a few years earlier, in 1826, at Monticello, his plantation outside of town.

George Carr, who bought her that day, was a Charlottesville lawyer in the market for a personal servant for his sister, who was sickly. Eliza took the name of her new owner and cared for that sister until she died. Then she joined the Carr household slaves in Charlottesville.

Carr was not a major slave-owner. In fact, he didn’t own land until after he married in 1855, when he was 55, and purchased The Barracks Farm five miles northwest of Charlottesville in Fredricksville Parish.

George brought his household slaves with him to the farm --- including Lewis Carter --- whom Eliza had married --- and their children. When the 1860 census was taken, nine slaves were living on the farm, most likely Lewis and Eliza and six of their 11 children plus another adult. Slaves were never named in census records before emancipation, recorded only by gender and age.

Eliza and her family were recorded first by name in a census during 1870, after they had been emancipated but still were living in Fredericksburg Parish. By this time Lewis was dead. Eliza gave her age as 41 and she headed a household that included her five younger children ---- Henry, Harriet, Charles, Oscar and Emma. Only little Emma, age 4, had been born free.

The Carters continued to live in Virginia until 1883 when, out of blue, an opportunity for a new and better life in an outlandish place called Lucas County, Iowa, suddenly presented itself.

The White Breast Mining Co., then operating at full production near its company town Cleveland, east of Lucas, was experiencing labor problems with its white miners. This had been going on for months by the spring of 1883 when John Osgood, head of the company, decided to end the problem once and for all. He sent men into Virginia to recruit miners among former slaves and their sons, promising good jobs and company housing.

What the recruiters did not tell these men was that they would be replacing striking white miners and discouraging future strikes by proving that workers could be replaced easily if they did strike.

Eliza Carter’s sons and a son-in-law jumped at the chance and Eliza, now in her 50s, and Emma, still unmarried, came along. The first passenger cars filled with black miners arrived at the train station in Cleveland during June of 1883 and more followed during July and August.

Company housing was built rapidly in an unincorporated area near the mines just east of Cleveland, which still was reserved for white miners, and a new mining camp called East Cleveland sprang up. By 1890, as many as 250 people, most of them black, lived in East Cleveland.

There was a lot of rhetoric from the white miners, resentment and threats, but there was no violence to speak of. White and black miners eventually learned to work side by side in the mines. And East Cleveland grew into a vibrant community with its own school, social organizations, religious congregations, even choirs. Although life in the mining towns of Lucas, Cleveland and East Cleveland was segregated, it generally was amicable.

But the White Breast coal fields began to play out during the late 1880s and, during 1890, the mines were closed. Many miners, both black and white, followed the jobs to mining camps elsewhere in southern Iowa. By 1900 Lucas County’s black population had declined to 195, down from its high about 1890. There still were jobs at other mines in Lucas, so the biggest number of black residents still was in the Lucas area. But by 1910, only 80 black residents remained in the county and by now most lived in Chariton.

Eliza had moved into Chariton to a small rented home on West Court Avenue about 1889. Fiercely independent, she would live in that area near friends and family, but in her own home, for more than 30 years, supporting herself as a washerwoman. By 1900, her youngest daughter and son-in-law, Emma and Andy Spears, had moved to Chariton from East Cleveland and joined the staff of a hotel. Eliza went to work there, too --- as a laundress.

West Court Avenue was at the heart of Chariton’s black community during those early years and an African Methodist Episcopal Church was built on the site of that big building you call Carpenters Hall now. But the black population continued to decline and by 1920, only 48 remained.

By this time, Emma Spears had died and Eliza’s youngest sons, Oscar and Charles, had moved to Chicago and Kansas City respectively. Only her older daughter, Harriet Martin, remained in Chariton --- and when her mother became unable to work, Eliza moved in with the Martins. She died there on Friday evening, April 6, 1923, after an illness of only a few weeks. Her funeral was held on Sunday and burial followed here, in Potter’s Field.

Harriet followed her mother to Potter’s Field in 1933, age 80. By that year, Lucas County’s black population numbered only 40.

Only the older black residents remained as the years passed --- younger men and women moved elsewhere in search of opportunity. When Theopolis “Buster” Gibson died at the Iowa Veterans Home in Marshalltown during 1990, he was the last surviving representative of Lucas County’s original and once substantial black population to call it home.
Posted by Frank D. Myers at 5:54 AM