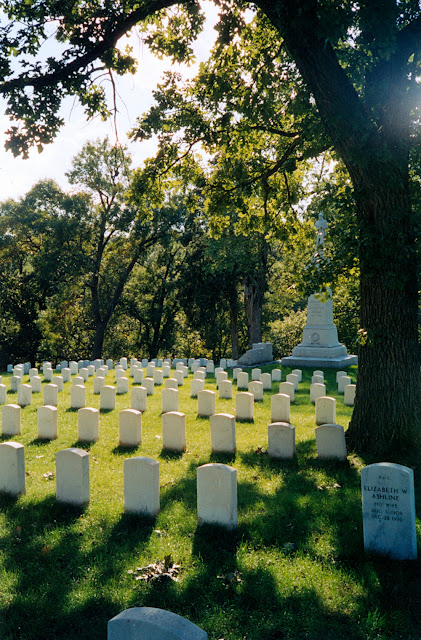 Arlington usually comes to mind first when U.S. national cemeteries are mentioned, but the fact of the matter is --- Iowa's Keokuk National Cemetery is older, among the 14 originals designated during 1862 by President Abraham Lincoln after he had been authorized by Congress on July 17 of that year to establish these now-iconic places to hold the remains of the Union dead.

The Arlington site was not designated a national cemetery until June of 1864.

I wrote earlier in the week about the relocation in 1948 to Keokuk of a majority of those buried originally in the Fort Des Moines post cemetery. And I have another story to tell, but got involved in checking out the history of this beautiful place way down in the southeast corner of the state, too. I took the photos on a visit years ago, so they lack high digital resolution. But at least they're mine.

Keokuk was Iowa's first major Civil War staging site, home to Camp Ellsworth, then Camps Rankin, Halleck and Lincoln. As the war progressed, five U.S. Army hospitals were established in the city in part because the pioneer Keokuk Medical College was located here and in part because of its convenient location along the Mississippi River. Thousands of wounded and/or ill U.S. troops were brought upriver by riverboat for treatment here as the war ground on; some 600 of them died.

The first burial occurred during late September of 1861 in an area of the city cemetery, Oakland, that came to be known as the Soldiers' Lot. As the number of burials increased, the city transferred ownership of that area  to the federal government and it was expanded.

During late May of 1883, Maj. Gen. William Worth Belknap (1829-1890) was invited to deliver the Memorial Day address at Keokuk National Cemetery. He had been a Keokuk attorney when the war broke out and rose to national prominence as a commander of Iowa troops. Following the war, he was appointed in 1869 as U.S. Secretary of War in the Grant Administration and served until 1876, when he was impeached (later acquitted) by the Senate for corruption.

By 1883, he was back in Keokuk --- at least for a time --- and still honored. Here's a little of what he said about the cemetery's history during a very long and florid address, reported upon in the upriver Burlington Weekly Hawk-Eye of June 7. Although Belknap may well have been responsible for ordering, as Secretary of War, improvements to the cemetery, it had been designated, despite his claims, a national cemetery early in the war.

"There are about eighty national cemeteries. In them three hundred thousand men lie buried. The first interment in the Keokuk National cemetery was of a soldier of the Third Iowa Cavalry on September 23, 1861. I may be pardoned for saying that immediately after the close of the war I took some personal interest in having this ground declared a national cemetery. It had been proposed to transfer the remains of these gallant men to another locality, possible outside the state. Against this I earnestly remonstrated, but had great fear of the result, when it happened that fortune gave me the opportunity to order that it be made a national cemetery. Mr. Clayton Hart, a brave soldier of the Seventh Iowa, was appointed superintendent; additional land was purchased; the improvements which are around us followed in rapid succession, until my comrades, an inviting spot has been made a beautiful resting place for our beloved dead. Here lie six hundred and four known and thirty-three unknown Union soldiers. There are, too, the remains of eight Confederates. They were the champions of a mistaken cause, bravely battled for, and lost. Those of us who were in action know how well they fought, but their banner is laid away, and all over the states of a reunited and unbroken union now floats, we trust forever, the flag of the free."


A soldier identified as Thomas Lurch, attributed to Co. C, Third Iowa Volunteer Cavalry, apparently was that first unfortunate soldier to be buried here. You'll note that his tombstone identifies him only as a "U.S. Soldier," however. When the time came to order tombstones for those buried here, no trace of anyone named "Thomas Lurch" could be found on Third Cavalry rosters.

This suggests that he was somehow misidentified, although records do state that the man buried here did indeed die and was buried on Sept. 23, 1861.

As of 2018, approximately 4,700 military personnel and their dependents are buried at Keokuk National Cemetery and it remains open to future burials although administered from the upriver offices of the much larger Rock Island National Cemetery. 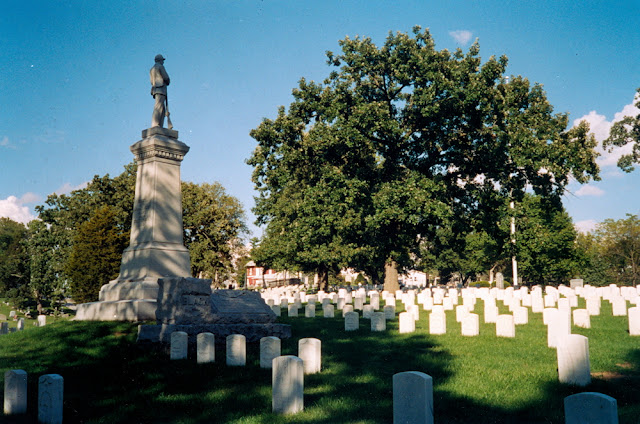