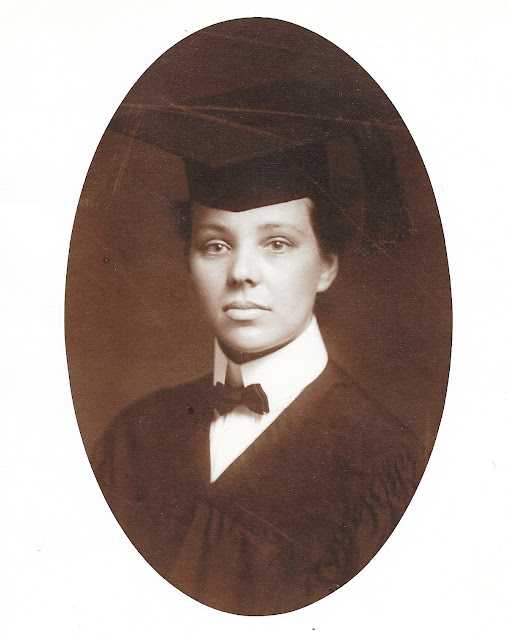 Quite a bit has been written about Lucas County's early physicians --- mostly before 1950 by men who held Doctor of Medicine (M.D.) degrees. Which probably explains why Dr. Dora Wyland McAfee, among Chariton's earliest osteopathic physicians, has been mentioned rarely, if ever.

Here she is, in a beautiful portrait from the Lucas County Historical Society collection that was taken during 1903, the year she completed her training at the S.S. Still College of Osteopathy in Des Moines, now Des Moines University and the fifteenth largest among all U.S. medical schools.

Although Dr. McAfee died too young --- at the age of 48 in 1920 --- hers was a story of personal triumph over tragedy that deserves the telling.

Dora's given name was Isadora, but she always was known by the shorter version. A daughter of James B. and Jane (Talbott) Wyland, she was born on Nov. 17, 1871, in Douglas County, Kansas. By the time she was 9, her parents had had enough of Kansas, however, and relocated during 1880 to far northeast English Township, Lucas County, settling on a farm a mile west of Pleasant Prairie Methodist Church, northwest of Belinda.

On March 27, 1895, when she was 23 and after gaining some experience as a rural school teacher, Dora married William R. McAfee at her parents' home.

Born near Lincoln, Illinois, on April 14, 1862, Will was about 10 years older than Dora. A graduate of a Valparaiso, Indiana, normal school, he was an experienced teacher --- and farmer. Teachers, like preachers, generally found it necessary to supplement their incomes back in those days.

He had arrived in the Belinda neighborhood during 1893 to teach Strong School, but worked as a farm hand in the neighborhood on the side.

Just before their marriage, William leased a farm in the Belinda neighborhood and it was there that the couple settled down to make their home.

Tragedy struck just four years later --- on July 14, 1899 --- as the couple were expecting the birth of their first child. Will had driven horses into the barn at the end of that day and as he was following them into the building, one kicked him in the abdomen.

At first, it didn't seem as if he had been injured seriously. It soon became apparent, however, that there were internal injuries --- and that nothing could be done medically in rural Lucas County for him. As a result, Will died five days later, on July 19, age 37.

It was his wish to be buried at his old home in Lincoln, Illinois, and so after funeral services on July 20 at Pleasant Prairie Church, his remains were brought into Chariton and placed on an east-bound train, accompanied by Dora and other immediate family members.

Later that year --- and the date isn't known --- Dora gave birth to a son she named Willie. He did not survive long, however, and died during late December. The child's remains were taken, too, to Lincoln for burial beside his father.

When Dora's portrait came back to Lucas County from California during 1973, her nieces sent along a brief biography that stated the obvious --- "These events in her life left her very saddened."

Her 1920 obituary explains what she did about it: "Though prostrated with grief, she recognized the needs of others and soon entered the Still school of Osteopathy in Des Moines, where she applied herself to the science of healing the ills of the body."

Dr. Summerfield S. Still and his wife, Dr. Ella Still, had founded the S.S. Still College of Osteopathy during 1898 and Dora's brother, Samuel I. Wyland, had enrolled as one of their first students. So Dora had a pattern to follow.

From its founding, Still College had recruited and admitted many women --- as many as a third of some graduating classes prior to 1920. So there was none of the conflict there that women sometimes faced in more traditional medical schools.

Following his graduation, Samuel Wyland returned to Chariton to open his practice. Dora earned her degree during June of 1903 and set out for Decorah to open her first practice there.

During June of 1905, wishing to be closer to her family, Dora purchased the Chariton practice of another osteopathic physician, Dr. Edna Blake, whose rooms were located on the second floor of the Oppenheimer Building on the west side of the square. Dora moved into these rooms and her brother, whose office was elsewhere in town, joined her in a joint practice.

"Dr. S.I. Wyland also enjoys a large practice," The Patriot reported. "He and his sister will make a strong team and we predict great success for them."

The siblings continued their joint practice in Chariton until 1910, when Sam Wyland caught California fever and after touring up and down its coast for a few weeks that summer decided to relocate his family to Santa Rosa. The move was made during September.

Dora continued her solo practice and, according to her obituary, "during the years that came and went she built up a splendid practice, never knowing what it meant to be too tired to respond to the call of the suffering."

She also, during those years, "tenderly cared for her mother through her last illness, provided for an invalid brother until his death and with loving solicitude endeavored to protect her sister from the ravages of the disease that had laid hold upon her."

Both Dora's brother, Cyrus, and sister, Eliza (Wyland) Stanger, were long-term victims of tuberculosis; Cyrus died with Dora at his side in Alamogordo, N.M., on Dec. 17, 1918. Eliza survived Dora by two years.

In addition, she worked during the last full year of her own life with physicians at the Mayo Clinic in Rochester, Minn., on the case of her brother-in-law, Charles D. Stanger, a victim of cancer.

Later on during 1919, Dora's own health failed. Diagnosed with pernicious anemia, she was treated for several weeks at the Mayo Clinic and elsewhere, but failed to respond.

During October of 1919, Dora sold her practice to Dr. Olive Elam, who had been practicing in Russell, and Elam moved into the former McAfee offices in the Oppenheimer building.

As her health deteriorated further, Dora moved to Des Moines to live with her brother, Edgar --- a carpenter --- and his family, where she was cared for until her death on May 14, 1920.

Dr. McAfee had asked to be buried in the Chariton Cemetery near her mother and brother, rather than in Illinois, with her husband and son, and so funeral services were held on May 17 at First Methodist Church where she was remembered as a "noble woman whose life had been one of service, one who rejoiced in doing good to others."

great story of a woman Dr.....even back in the day, women were smart and dependable

I think it is amazing how many women worked as physicians in Chariton in those days. It seems very unusual..and delightful. Thank you for sharing this story, Frank!