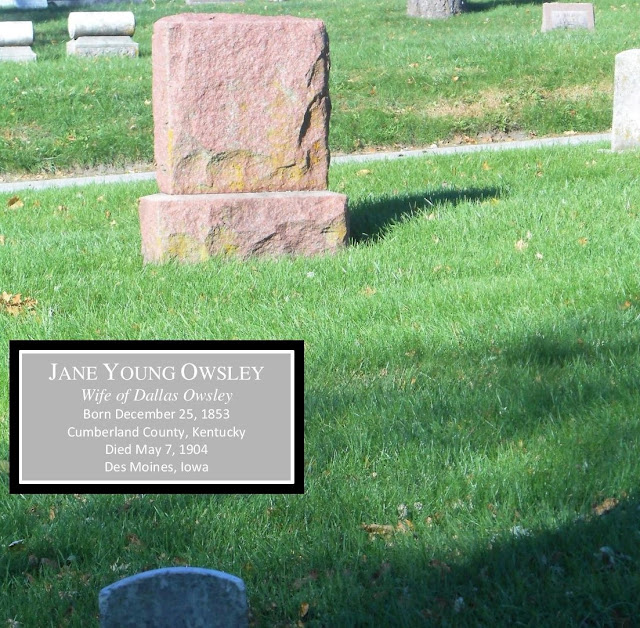 Grates on a nerve, doesn't it, that word "colored"? After some thought --- devious manipulation maybe to grab your attention --- I decided to use it in the header of this little piece about the Owsley family and one of its matriarchs, Jane.

That's how the the editor of The Chariton Leader referred to his black neighbors back in 1904 when Mrs. Owsley was interred in the Chariton Cemetery, a form of casual othering that stated the obvious. There was no need for The Leader of May 12 to commence her obituary with the line, "Mrs. Dallas Owsley (colored), formerly of this city ...."

That was just the way it was.

Jane's grave is unmarked, so I've created a virtual tombstone for her (above). It's located on the approximate spot of her burial, the most southerly option among six spaces in the east half of Lot 5, Block 25, Old Division. Enter the cemetery's main gates and drive due west, take a left onto the second driveway south and look to your left. Mrs. Owsley is buried southeast of the big red granite stone commemorating Andrew, Hannah and Anna Hawkinson.

Jane is the only occupant of the lot, purchased by her husband on May 9, 1904, the day she was buried here. Dallas himself, who died in 1920, is buried in  Des Moines Glendale, where some of his children also rest.

There are several related stories centered on this gravesite, including an accounting of how the Owsleys came to be in Chariton in the first place, what they did here and why the decision was made to return Jane to Lucas County for burial once the family had moved on.

Jane Young and Dallas Owsley both were natives of Cumberland County, Kentucky, born into slavery at Burkesville, Jane on Dec. 25, 1853, and  Dallas, on Sept. 15, about 1850. They were married in Cumberland County on June 2, 1873.

Dr. Joel Owsley, a Burkesville physician, and two of his sons, William F. and John Q., owned between them 35 slaves in 1860. Dallas Owsley and his kinfolk most likely were among them, taking their surname after emancipation from their former owners.

Dallas, Jane and their six eldest children still were living in Burkesville in 1880, alongside Henry and Martha Owsley and their family of four. Dallas and Henry probably were brothers, but I can't prove that. Both men were employed as laborers.

During the early 1880s, the Whitebreast Coal and Mining Co., owners of the mines at Cleveland in western Lucas County, then among the largest in Iowa, began to recruit black miners, first from Kentucky and then from Virginia, to break strikes by their white labor force. That force consisted largely of immigrants --- from Wales, Scotland, England, Ireland and Sweden. The Welsh miners especially brought with them the concept of organized labor and when the mine owners figured out a way to cut wages dramatically, they went out on strike.

The Owsleys, Dallas and Henry and their large families, probably were among the first to reach Lucas County. All were living in the town of Lucas when the 1885 state census was taken. Later arrivals from Virginia would be housed by the Whitebreast company in an unincorporated area beyond the company town of Cleveland known as East Cleveland and that's where they are found in the 1885 census.

Although both men were miners, Dallas's occupation on the census sheet was given as "preacher." He would become a leader --- and preacher --- as Lucas County's black Baptists organized themselves into a congregation.

The brothers adopted differing spellings for their surname while living in Lucas. Henry's family generally styled themselves "Ousley"; Dallas and his family stuck with "Owsley."

Henry's wife, Martha, died at Lucas on June 9, 1895, and following services at the Methodist Church was buried in Fry Hill Cemetery. Henry and his family continued to live --- and work as miners --- in Lucas into the first decades of the 20th century. In old age, Henry moved to Aurora in Kane County, Illinois --- where some of his children had settled --- and died there on Nov. 28, 1922.

Dallas Owsley, however, had decided early on that mining was not to be his career. By the autumn of 1886, he had moved his family into Chariton where he worked to organize a Baptist church, signed on as a farm hand for William B. Penick --- accompanying loads of livestock to market in Chicago now and then --- and took on any other job that became available to support his huge family. There were 13 surviving Owsley children of 15 born although all were never living at home at the same time.

Preaching services for his Baptist flock were held at the courthouse and elsewhere in rented quarters and, apparently, the Rev. Mr. Ousley had a reputation for being somewhat long-winded. The Chariton Herald of Oct. 28, 1886, reported for example that, "The Rev. Dallas Ousley, who is not overburdened with this world's goods, has had some sickness in his numerous family, and some friend, on last Sabbath, with his heart full of kindness, furnished him the material for a first class dinner of soup for his entire family. The zealous preacher however preached all day to his hearers and forgot to take the soup bone home."

For a time, Dallas worked in Ottumwa to support his family in Chariton, but returned to live full-time in Lucas County during 1894. During of April 1897, he purchased one of the miner houses then for sale at Cleveland --- the village now rapidly disappearing after the Whitebreast mines closed --- and moved it into Chariton where it was re-erected for his family on lots at the east end of Braden Avenue purchased from D.Q. Storie.

About 1900, however, Dallas and Jane decided to move their family to Des Moines, most likely because there were more work opportunities there for themselves and their families. Four of their younger children still were at home when the 1900 Polk County census was taken. Dallas's occupation was given as day laborer and two of the daughters were employed as servants.

During the latter part of 1903, Jane Owsley became ill and cancer eventually was diagnosed. During early 1904, she underwent surgery at Mercy Hospital in Des Moines, then died at home overnight on Friday/Saturday, May 6/7.

The dramatic incident that resulted in Dallas's decision to bring her remains to Chariton for burial was reported upon in The Bystander, Iowa's pioneering newspaper for its black community, on Friday, May 14, as follows:


SAVES HIS WIFE'S BODY FROM THIEF

Unknown parties were interrupted and routed last Saturday morning in an attempt to steal the dead body of Mrs. D. Ousley, a colored woman who died Friday at her home at 981 West Second street.

She was lying near an open window, covered by a sheet, and the only person near the body was the husband. At a moment when the man's back was turned he heard a noise near the window. He started in that direction and a young man, hearing his approach, dropped from the sill to which he was clinging into the yard below. With his head ducked and his hat over his face he darted across the lot and had disappeared almost before the old colored man realized what was occurring. He was sharp enough, however, to get a glimpse of the face and he will know it if he sees it again.

Mr. Ousley told of the incident to friends, and in view of the circumstances preceding the discovery of the trespasser, he is positive that he interrupted a carefully laid plan to steal the body of his wife virtually from beneath his eyes, and sell it to a medical school for dissection by students and surgeons.

So positive in this belief is he that he yesterday decided not to inter the remains of his wife in a Des Moines cemetery. The interment will be made in another Iowa burial ground.

The nature of the illness of Mrs. Ousley and her condition during the the days preceding her death, were such as to make the body a desirable specimen for carving in the cause of science. For more than a week prior to her death, she lived without food, and physicians had no hopes of her recovery.

Three months ago, it was stated yesterday, she underwent an operation in Mercy hospital for cancer of the stomach. The operation is said to have been successful, and the effect of this ordeal had nothing to do with her death. She died because of a complication of diseases.

There has been no parallel of this case in Des Moines. It is a fact that is given no more circulation than possible, that there is a place for any dead body in any institution where the science of medicine and surgery is taught, and it is said that in greed for learning along this line, extreme measures are often taken for procuring the "stiffs" as they are called within the halls of science.

Two days later, on Monday afternoon, May 9, the Owsley family brought Jane's remains to the Chariton Cemetery for burial, followed that evening by a memorial service with the Baptist congregation that Dallas formerly had served as pastor.

Her obituary was published on the front page of The Chariton Leader of Thursday, May 12, as follows:

Mrs. Dallas Owsley (colored), formerly of this city, died at her home in Des Moines on Saturday, May 7, 1904, after an illness of nine months with a cancerous tumor.

Miss Jane Young was born in Burkesville, Kentucky, on Christmas day, December 25, 1853. She was married there to Dallas Owsley on June 2, 1873. They came to Chariton about 1878 (actually during the early 1880s) where they resided until four years ago when they moved to Des Moines where they have since resided.

Mrs. Owsley was the mother of fifteen children, thirteen of whom, with the father, survive her. They are Tom of Logan, John of Iowa City, Wm. of Galesburg, Illinois, Leslie of Chicago, Mrs. Gertie Diggs, Mary, Beulah, Laura, Harry, Arthur, Ernest, Dallas and Albert of Des Moines.

Mrs. Owsley was an industrious, kind-hearted woman, respected by all who knew her, and the family had many friends in Chariton who will sympathize with them in their great grief.

Dallas Owsley survived Jane by 16 years, dying of typhoid fever on Sept. 11, 1920, age about 70, at the Des Moines home he shared with his daughter and son-in-law, Gertrude and Fennel Diggs. He was buried in Glendale Cemetery, although the grave seems not to have been marked.

During 1960, to reclaim unused burial spaces from purchasers long since vanished from Lucas County, the city of Chariton filed a general lawsuit against dozens of them, including Dallas Owsley, dead then for 40 years, alleging nonpayment of annual fees for gravesite care. In that manner, the five remaining spaces on the lot where Jane is buried returned to city ownership although they've never been resold.

There's a good deal of green space and relatively few tombstones in this small section of the cemetery. Others are buried nearby in unmarked graves, too. But now you know that Jane Owsley rests here among them and that she carried with her to the grave stories worth remembering.

I always read your stories with great interest and enjoy them very much.