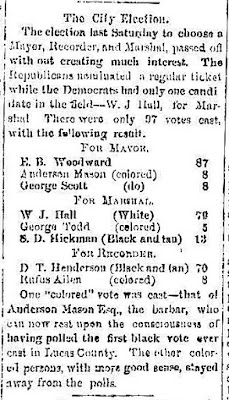 I love a good footnote and thanks to John V. Faith, the vagabond copperhead editor who arrived in Chariton during 1867 to found The Democrat, we know who Lucas County's first black voter was --- Anderson Mason, a barber whose shop was on the south side of the square, during December of 1868.

Faith and his Democrat were obsessed with race and he had been fit to be tied earlier in the year when Iowa voters (all of them white males) went to the polls and approved an amendment to the state constitution eliminating the world "white" from voting requirements.

So when Chariton city elections rolled around during mid-December of that year, there were five or six eligible black electors in Lucas County, but Mr. Mason was the only one who chose to vote, according to Faith. Equally interesting, though, was the fact that in addition to Republican and Democrat nominees there were five write-in candidates --- four of them black --- for the three offices.

Here's Faith's report of the election from The Democrat of Dec. 24, 1868, published under the headline, "The City Election."

The election last Saturday to choose a Mayor, Recorder, and Marshal, passed off without creating much interest. The Repblicans nominated a regular ticket while the Democrats had only one candidate in the field --- W.J. Hall, for Marshal. There were only 97 (sic) votes cast, with the following result.

One "colored" vote was cast --- that of Anderson Mason Esq., the barber, who can now rest upon the consciousness of having polled the first black vote ever cast in Lucas County. The other colored persons, with more good sense, stayed away from the polls.

A couple of things to note in the report. Emmet B. Woodward, successful mayoral candidate, was the only man in the field whose race or political sympathies was not indicated. Woodward was a Civil War hero, reportedly the first Lucas Countyan to respond to President Lincoln's call to arms. Even John Faith would not mess with Emmet Woodward.

I checked the 1870 federal census of Lucas County to see how many black citizens Lucas County actually had during that year --- and the answer is approximately 30. The county had no black residents in either 1850 or 1860 and only one --- a child brought to what now is the Derby area from Pennsylvania by the Throckmorton family --- during 1856.

Anderson Mason, his wife, Nancy, and their five children were identified as mulatto. Both senior Masons were Ohio natives who had moved to Lucas County from Mt. Pleasant, Henry County, during the 1860s. The family owned a house valued at $500 and had personal property valued at $300 --- almost exactly the same resources attributed to their next-door neighbors --- my widowed aunt, Eliza Boswell, and her six children who had moved into Chariton from northern Wayne County after the Civil War.

Another of the "colored" write-in candidates also was a next-door neighbor of my aunt --- Rufus Allen, 51, a day laborer born in Virginia, who was enumerated with his son, Daniel, 18, born in Missouri. They were renters rather than property owners.

George Scott, age 30, his wife, Susan, age 34, and their four children also were identified as mulatto. His occupation was not given, but they owned a house and personal property of comparable value to the Masons and the Boswells. George Todd, 49, his wife, Elvira, and their two children owned a house valued at $800 and had $480 in personal property. His occupation was not given. He was a Missouri native, Elvira was born in Kentucky.

I ran out of time while attempting to find out what happened to these 1870 Chariton residents, so this report is only partial. Stephen D. Hickman, the "black and tan," was a law student at the time of his write-in candidacy. He went on to become one of Chariton's most influential --- and affluent --- citizens known until the end for his liberality both in religion (he was Universalist) and social causes.

Anderson Mason, the barber, moved his family to Creston during 1877, then to Council Bluffs and finally to Omaha, where he died during 1914. George Todd and his family moved west into Kansas during the 1870s.