A visit to New Cleveland & Whitebreast No. 4 mine 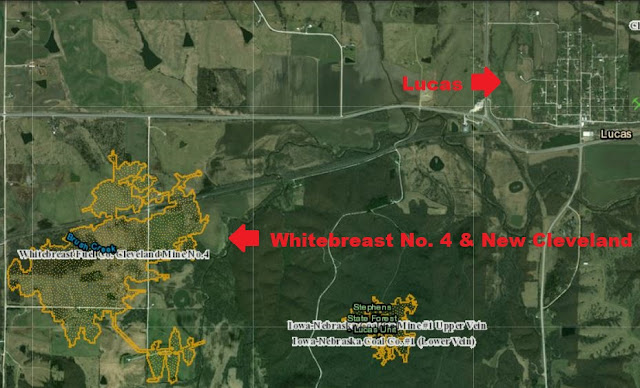 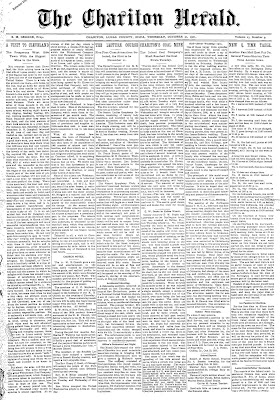 Samuel M. Greene, an excessively bright, well-educated and talented young man from Clarinda, had just purchased The Chariton Herald back in 1901 and was exploring its territory during October when he alighted from a C.B.&Q. passenger car at New Cleveland and set out to explore.

This miracle town of a thousand people and sprung in less than two years from farm land two and a half miles southwest of Lucas around what at the time was the largest and most technologically advanced coal mine in Iowa --- Whitebreast No. 4.

The Whitebreast mines No. 1-3 had been located between 1878 and 1891 just east of Lucas at Old Cleveland --- also a mining town developed by mine owners to house and serve hundreds of mining families. It had faded away after those first Whitebreast mines closed; even the big two-story school had been moved west and joined to a similar structure in Lucas.

So when the new Whitebreast mine opened as the 19th Century closed, the name simply was recycled. And here's what Sam Greene found --- as published on Page 1 of the Herald of Oct. 31, 1901:

"Not everyone knows that Cleveland, the little mining town on the west side of Lucas county, can boast of the biggest coal mine in the state of Iowa and one of the biggest in the United States. There is a hole in the ground over there --- two holes, by the way --- that go down for about 325 feet, and then ramify in all directions in the coal strata. There are tunnels to the north for half a mile, east and west from the shaft for a quarter mile each, and south for an equal distance. There are seven miles of these tunnels in all, and scattered through them are 350 or more miners, working eight hours a day, digging, loading, hauling, lifting, running machinery, sorting the black diamonds after they come to the light, and the total amount of the work amounts to a great deal.

"For instance, last Saturday, so Superintendent D.O. Campbell informed us, 851 tons of coal were dug and loaded on the railroad cars on top of the ground. It made 35 cars in all. All in a good day's work, you would think, yet there have been days when over 1,000 tons were dug and hoisted. To secure that amount of coal from the bowels of the earth last Saturday required 328 men, 207 of them working inside the mine. For the labor they received in all a total of $750, $510 of which went to the diggers and the remainder to other workers. When it is realized that the wages of the miners and workers is only part of the total cost of production, our readers will not want to start a coal mine for themselves for the mere profit of the thing.

"There is the machinery, the wear and tear, the breakage, the mules to buy and keep, the props to buy, the tracks both inside and outside to build, and numerous other losses and breakages, unforeseen and avoidable, to contend with and overcome. It is no snap to own a big mine, and it requires constant watchfulness and management of the minutest details to make it pay at all.

"It is an admitted fact that Mr. Campbell, who has had charge of the Cleveland mine since it was opened in March of 1899, is one of the best managers and most successful superintendents that the state contains, besides being an unusually popular man with the immense force under him. He not only gets down among his men in "workaday rig," helping and directing the workmen personally, but he mingles with them in their sports and in their amusements, gives sympathy and aid in their trouble and sickness, and gives them no cause whatever to think that his elevation over them has made him in the least proud or arrogant. Mr. Campbell, or "Dave" as he is familiarly called, is a type of the modern and most effective mine superintendent, and his honesty with his men and the manner in which he mingles with them has created a sentiment of satisfaction and respect among them that would make it a difficult matter indeed for a strike to be stirred up at Cleveland No. 4.

"Mr. Campbell is a young man, still in his early thirties. He is a Pennsylvanian by birth, but came west when he was a tiny chap. At thirteen years of age he began working in the mines at Old Cleveland, now out of use. From the lowest position he worked up by degrees, stopping to railroad for a few years, until he now holds the present responsible position. He is eminently a self-made man, and a well-made man. Active in body, alert in mind, strong in character, yet mild when need be, well educated along general lines, knowing his own business thoroughly and with a pleasing and engaging manner there is no man in Lucas County better known and liked than young "Davy" Campbell. He is a modest man and does not care for notoriety, so the notice that this small comment will bring him will prompt in him a wish that the editor had not taken it into his head to give him so much 'taffy.' But this is not taffy. It is our honest opinion of a young man whom we respect and consider it an honor to know.

"But about the mine and the town of Cleveland. The mine belongs to the great Whitebreast Fuel Company, as most people know, which company has seven mines in operation in Iowa and Illinois, none of the others, however, as large as this one. The amount of money poured into the town of Cleveland every month in salaries is almost appalling. At an average pf $750 per day, which is about normal, a month of 25 days aggregates salaries of nearly $20,000, which the Whitebreast Company turns into Cleveland. Very little of it is spent outside of the county; much of it is spent at home, much of it at Lucas, and quite a little at Chariton. The miners make from $1 to $6 per day, depending much on the man, and the money is nearly all spent as it is earned. With these stupendous facts in view, it behooves Chariton to nurture well the new mine being operated by Mr. Haven for the Inland Coal Company, only two miles northeast of Chariton. It promises to yield richly of a fine quality of coal, and with proper encouragement can be made to pour a wealth of trade into Chariton such as is not now dreamed of.

"The town of Cleveland is larger than it looks. Most of the houses are exactly alike and are owned by the Company, which rents them to the miners at $7 per month each. the Company also owns a large general store, where the miners can buy the best of provisions and supplies at little more than cost. A meat market in connection is run in the same manner.

"With all its reported lawlessness, the town of Cleveland is remarkably orderly. Considering the fact that most of its population of 1,000 consists of miners and their families, and that miners, as a rule, do not have the advantages of moral and religious training that such cities as Chariton afford, it is surprising that the town is not worse, rather than as bad as it is. We doubt not that it has less lawlessness in proportion to its population and advantages than has Chariton, or many other towns of equal size.

"Many of the miners are Welshmen, and their love of music is inherited and proverbial. A large and well trained glee club, led by J. L. Morgan, one of the mine bosses, is maintained; besides two brass bands, one of white men and the other colored. Mr. Morgan is a natural and skilled musician, and is a composer and arranger of music --- much of which is played by the organizations under his charge. At the annual music contest of Welsh miners at Ottumwa each Christmas time, his music and his singers always have a prominent part in the programs. The miners take pride in doing well whatever they undertake, as witnessed by the baseball team which they maintain each year, and which is an uncomfortable match for the league teams of the state.

"Taken all in all, a visit to Cleveland is at once instructive and interesting to one not accustomed to coal mining on a large scale, and it will be a pleasure for us to return to the lively little city of Cleveland in the near future."

Whitebreast (or Cleveland) No. 4 mine continued to produce until 1908, when the Whitebreast Coal Co. closed and sold it. The coal vein it tapped contained at this location a good deal of black shale, or "bone," that had to be separated before the coal could be marketed. This cut into profitability and made the operation less viable as more profitable mines --- with less shale --- began to open northeast of Chariton and into Pleasant Township.

Although new owners made efforts into 1912 to keep the mine going at least on a part-time basis, it closed for the final time during that year. By then New Cleveland had for the most part vanished. Most of the miners' houses, designed to come apart and be moved, were loaded on rail cars and taken to Chariton and the new towns of Williamson, Tipperary, Olmitz and elsewhere.

Dave Campbell, who certainly had managed to catch Sam Greene's eye, continued to work in supervisory positions for William Haven's mining interests until the Ottumwa-based Haven retired, moving to other locations in Iowa and Illinois --- wife, Margaret, and son, Wade, moving with him. After that, he found comparable positions in Colorado and in the mines at Melcher.

In 1923 --- recognizing a trend in the fuel industry when he saw one --- Dave and a brother-in-law formed the Campbell-Phillips Oil Co. and opened two service stations in Centerville, where the family moved.

The Campbells were prospering there when a heart attack claimed his life at age 58 on Oct. 3, 1927. The remains were brought to Chariton and he was buried in the Chariton Cemetery.

During the same week that Sam Greene published the report of his visit to New Cleveland, he also reported that the main shaft of another of William Haven's operations --- the Inland Coal Co. --- had reached coal at 240 feet three miles northeast of Chariton. This would commence an entirely new chapter in Lucas County coal mining history, launching the industry northeast into Pleasant Township, bringing the Rock Island Railroad to town and resulting in the legendary Tipperary, Olmitz and Indiana No. 4 mines --- among others.

I lived out in what in believe to be the Whitebreast 4 and have been wanting to research this for years!!! Thank you so much for the information!!!

Frank,
Do you have any photos of new clevland? The ones I have located are a photocopy of a photocopy..... We have been metal detecting New Cleavland and found some cool points of interest and just look around and wonder what on earth went on here ....
Shawn20w@gmail.com

There are five images of New Cleveland elsewhere on this site: https://lucascountyan.blogspot.com/2020/08/rare-images-of-lucas-countys-new.html