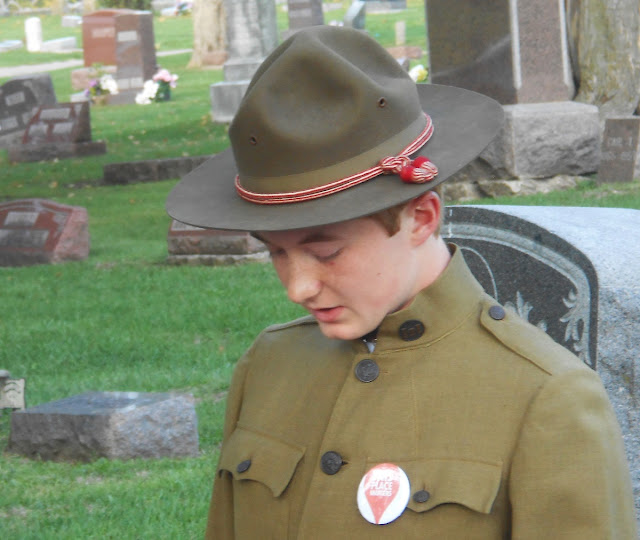 Note: This is the second in a series of five scripts prepared for presenters during Sunday's 14th annual Chariton Cemetery Heritage Tour, "Neighbors in Section E." The subject is Pvt. Forrest Dean Youtsey, one of the 26 young men from Lucas County who gave up their lives during World War I, which began 100 years ago, during 1917. The presenter is Trae Hall, in his third year as a cemetery tour re-enactor and a perfect fit for the World War I uniform from the Lucas County Historical Society which he is wearing. Of course it was his acting ability, not his measurements, that caused him to be offered the role.

My Gold Star Buddies and I did roll call the other day, since it’s been a hundred years since the United States entered what you call World War I (We called it the Great War; sometimes the War to End All Wars, although obviously it didn’t).

Twenty-six among the hundreds of us who went to war from Lucas County died during 1917 and 1918 and 10 of us are present and accounted for here today in the Chariton Cemetery.

They called us Gold Star Buddies because when we were alive our families displayed cloth banners in their homes, each with a blue star sewn onto it. Sometimes churches had these up front, too. When one of us died, the blue star that represented us was replaced with a star of gold.

So here’s a shout out to my Gold Star Buddies buried here on other Chariton Cemetery hilltops --- Pvt. Carl L. Caviness, the first Lucas County man to die in combat, shot down by a sniper; and Pvt. Gerald Bowen, Pvt. Kenneth McCoy and Pvt. Rudolph Sandahl, all killed in the Argonne Offensive.

The rest of us died of the Spanish flu, as did thousands of other American troops who lost their lives during that war. Pvt. Raymond Cain, PFC Lawrence Gookin, Pvt. Henry R. Johnson, Pvt. Robert Thomas, Pvt. Walter West --- and myself --- are buried here. In all, eight Lucas County men were killed in combat; 18 of us died of influenza.

My name is Forrest Dean Youtsey and I was a very fortunate son. My parents were Frank and Annie Belle Youtsey and I was born during January of 1893 on the home farm five miles southeast of Chariton on the Blue Grass Road.

My parents were prosperous farmers and when I was a kid, they built what was then and remained until it was torn down and replaced the biggest house in the neighborhood. Had I lived, that farm would have been mine.

As it was, my sister, Mae, and her husband, Frank Aton, inherited the farm and they were the last family members to live on the old Youtsey place. Some of you might still remember Mae and Frank.

I attended school through the eighth grade at Ragtown, then went into Russell for high school and, after that, into Chariton to attend Commercial College.

My goal in life was not to be a farmer, although that was my parents’ wish. I loved engines and fast cars and was a born mechanic. So it seemed to me that I should gain experience as a mechanic, maybe parlay that someday into my own dealership.

Nor did I really want to spend my life in Lucas County, but we were a close-knit family and my parents held on tight. I tried to make a break for it during early 1912, accepting a job as an auto mechanic in Des Moines. But then my dad made an offer I couldn’t refuse. He bought the Schreiber Garage on North Main Street and the Lemley Garage in Russell and I came home to run them. We called both Blue Grass Auto Stations and sold and serviced Chalmers, Overland, Buick, Ford and Zimmeman automobiles.

What Dad still really wanted me to do, however, was farm --- and late in 1912 he had an attack of what we called nerves that required lengthy treatment and visits to resorts in the South and elsewhere that offered cures. So we sold the Auto Stations and I took up farming full-time, although reluctantly.

We had a big operation --- grazing sheep and cattle, raising hogs and putting up enough hay in season to sell freight cars full. I was a good, but as I said reluctant, farmer and businessman.

Congress declared war on Germany on April 6, 1917, and within weeks --- when it became clear that President Wilson’s hope of building a volunteer military was impractical --- the draft began. I registered on June 5 and was among the first Lucas County men called.

Although I didn’t want to, my folks insisted that I apply for a farming deferment. That, however, was denied and I reported to Camp Dodge on Sept. 19.

At 24, I was older and had more business experience than most draftees, so was assigned to the Supply Company of the 339th Field Artillery. Once again, I was good at the job I was asked to do and, during December, was promoted to sergeant.

During January of 1918, the first wave of what became known as the Great Spanish Flu Epidemic of 1918 started spreading without warning from densely populated military base to military base across the country, arriving at Camp Dodge most likely with personnel transferred from Camp Riley. There was no defense against it or useful treatment for it.

Dozens of us became ill that winter and early spring although the second and most deadly wave of the epidemic, involving thousands, wouldn’t begin until late summer.

I was visiting my folks in Lucas County on Sunday, March 24, when I started coming down with what we thought was a bad cold. It got worse after I returned to Camp Dodge Sunday evening and by Tuesday, I was in the camp hospital, barely able to breathe. On Thursday, the 28th, I died of pneumonia as Mother held my hand.

By some estimates, 1,500 friends, neighbors and fellow soldiers attended my funeral at noon Sunday on the lawn of my parents’ home southeast of town. My remains then were escorted here for burial.

My father had scheduled his closing out farm sale for Thursday, April 11, and that went on as scheduled. Six months later, he dropped dead while helping his old friend and neighbor, J.W. May, on a nearby farm. Some said he died of a broken heart.

Members of Trae's fan club, including grandparents Bev and Francis Snook, were on hand to take a few photographs before and after his performance. 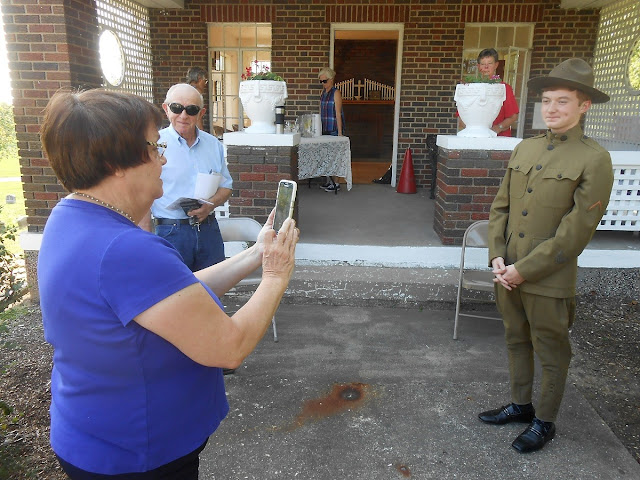