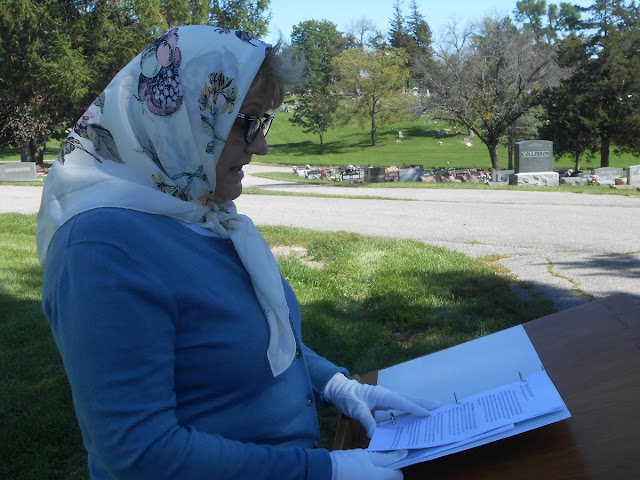 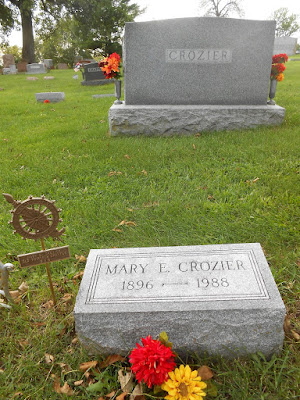 This is the third in a series of five presentations made during Sunday's 15th annual Chariton Cemetery Heritage tour. The presenter is Sherry Steinbach. Sherry and her husband, the Rev. Fred Steinbach, own and occupy what was built as the Crozier family home in northeast Chariton in 1918 and recentely celebrated its centennial with a birthday party.

MY NAME IS MARY Crozier, ladies and gentlemen, and I wish you a good afternoon --- and welcome. My working life was devoted to serving the public from behind the counters of Chariton’s oldest mercantile establishment, so it’s good to see so many of you here and to have an opportunity to visit with you again.

If you look carefully at the front of the building on the southeast corner of the square uptown, you’ll see the faded name J.T. Crozier painted above the windows of the south business front. James Thomas Crozier was my father and when my brother, Robert, and I closed the store upon retirement in 1974 we had been in business as a family in the same location for 88 years and in the same building, for 80.

MY FATHER was a native of Barnesville, Ohio, who stopped in Chariton during 1878 to visit a friend while traveling west to accept a job in Nebraska. Instead of moving on, however, he liked what he saw here and remained.

Papa found a job as clerk in the north-side dry-goods store of David D. Waynick and eight years later, in 1886, married a niece of his employer --- Miss Lulu Waynick. That same year, he struck out on his own, leasing an old wooden building on the southeast corner of the square and opening as “Crozier’s” in March.

Tragically, both Lulu and their infant daughter died two years later and were buried in the Waynick family cemetery southwest of Chariton.

During April of 1891, Father returned to Ohio and married Mollie Penrose, 12 years his junior, who became my mother. Their first daughter, Sarah, was born during April of 1894, but lived only a few months and died during January of 1895.

So there was a degree of trepidation, as well as great rejoicing, at my birth on Oct. 7, 1896 --- healthy and happy. I lived 92 years, so any fears my parents might have had about my future proved groundless. Sister Charlene and brother Robert arrived a few years later.

TWO YEARS before my birth, in 1894, the old frame building that housed the business was a wreck. The owners, heirs of Daniel Eikenberry, decided to build a grand two-story brick block in its place, allocating the south store front to Crozier’s.

My father obtained permission from the city council to move the old wooden building sideways into Court Avenue --- with shelves fully stocked --- and continued in business there until the new building was complete.

BY 1897, my parents were in a position to build a new home for themselves. In October of that year, Father bought a block of land from Dr. James Wright in northeast Chariton at the southwest corner of his rural estate, Meadowside.

Construction of our gracious Queen Anne home, one of the finest in the city, commenced during May of 1898 and we moved in before Christmas of that year.

This is the home I grew up in and where I entertained my friends. I was a member of the Chariton High School graduating class of 1916 and entertained both classmates and teachers during a reception there in December of 1915. My Sunday school friends from First Presbyterian Church also were frequent visitors.

We had four and a half acres, so it was a little like a farm. There were gardens and orchards, a milk cow, chickens, horses, a barn and stables --- always chores to do.

During the fall of 1916, I left this home to begin two years of study at Simpson College in Indianola.

IN MARCH OF 1918, I was called to the telephone in Indianola and told that our beautiful home had burned. It was a Sunday, March 24, and Mother, Father, Charlene and Robert were attending church when passers-by noticed the flames. Our fire department responded, but there was insufficient hose to reach from the nearest hydrant to the house so there was nothing to do other than watch it burn. A few of our belongings were pulled from the first floor, but in badly damaged condition. So for the moment, we were homeless.

My father contacted Mr. William Lee Perkins, an architect newly arrived in Chariton, and commissioned him to design a new house for us --- in the latest style, with all of the latest conveniences, and with fireproof exterior walls of tile and brick.

This is the house I returned to after completing my education at Simpson and the house that still stands at Crozier Corner, listed on the National Register of Historic Places and recently celebrated on the occasion of its 100th birthday by its current owners, Sherry and Fred Steinbach, with a party.

I GREW UP in Crozier’s Store, of course, so it seemed only natural that I go to work there full-time once my course at Simpson had been completed. Robert joined us after he earned a degree in business from the University of Iowa in 1927.

At that time, the store operated much as it always had. We were a general store, selling everything from groceries to dry goods. Father bought huge amounts of eggs, cream, produce and poultry from Lucas County farmers, many of whom established credit with us to carry them through the winter months rather than accepting cash payments. Most of our farm customers took their payment in trade, exchanging what they had to sell for merchandise we had to offer. Father marketed a good percentage of the products he took in trade elsewhere in Iowa.

As father aged, Robert and I moved toward joint management of the business and by 1936, when Papa died at age 78, we were prepared to carry it forward. Robert had married Gwendolyn Carpenter by this time and they had a son named James Robert. Sister Charlene had married Leo Brown, they were established on a large turkey farm on the south edge of Indianola and had a daughter named Bonnie. I continued to live at home with our mother until her death during 1939, then assumed ownership of the house.

DURING 1941, Robert and I decided to totally reorganize the store as we faced changing times and changing markets. All of the old fixtures were disposed of, except the tall storekeepers’ desk that dated from 1870, now in the Lucas County Historical Society collection, which had been at the heart of Crozier’s since the beginning. We hired a St. Louis consultant to redesign the store and installed new lighting and a new furnace, too. It was, when we held a grand opening during October of 1941, one of Iowa’s most up-do-date small-town department stores. We continued to be a profitable and successful business, but after that, hardly anything changed.

IN 1960, tired of dealing with a very large house and extensive grounds, I began negotiations with Drs. Hermann and Egly, who had opened an office in Chariton some years earlier. Eventually, I sold them all of the property and prepared to move to a new home a block north of the square, within walking distance of the store. Hermann and Egly decided to build a new clinic at the northwest corner of the property and Dr. and Mrs. Egly made the Crozier house their home.

I disposed the home’s contents in two phases, a public auction in the fall of 1960 to sell what I knew would not be needed; then a private sale during the spring of 1961 to dispose of furniture and antiques that had not fitted into my new home.

During 1973, Robert and I talked a lot and decided that it was time for us to retire. I was 77 and he was 72. We decided to close the store during 1974, our 80th year in the Eikenberry Building, and announced our decision during January.

Robert died in 1981 and Charlene, the next year. I continued to live in my new home until 1984, busy with Women’s Club, Daughters of the American Revolution, Presbyterian Church activities and the Lucas County Genealogical Society.

In 1984, age 88, I moved to Chariton Manor. Four years later, age 92, I died on the 13th of November, 1988, at the Lucas County hospital, then joined my parents, brother and baby sister here in the Chariton Cemetery.