For ever Lucas County at the Oise-Aisne Cemetery

The legacy of English poet Rupert Brooke (1887-1915) includes a lovely sonnet entitled "The Soldier" that opens, "If I should die, think only this of me: That there’s some corner of a foreign field that is for ever England."

Something similar could have been written, too, about the United States --- some 30,000 of its sons who died in service during World War I rest in American cemeteries overseas, meticulously maintained still, as Memorial Day 2017 approaches, by the American Battle Monuments Commission.

Twenty-six Lucas Countyans died in service during what then was known as the Great War and the remains of 24 were repatriated after the war had ended. They all are buried now in Lucas or adjoining counties.

Family circumstances, however, led to decisions that resulted in permanent interment in France for for both Culbertson and Strain. It would be an error to suggest that they were "left behind."  They are buried with comrades in what are among the most breath-takingly evocative memorial sites on the planet.

Pvt. Culbertson, like more than half of America's World War I fatalities, died of an illness rather than a wound --- and curiously, he never set foot while living on the soil of France in which he is buried.

Fred was born near Chariton during 1895, son of Will and Hattie Culbertson. His father, who served as county treasurer, went on to a career in banking and was cashier of Chariton National Bank at the time of his death during 1905 at age 46, when Fred was 10, of cancer. Fred's older brother, Leonard, had died horribly the year before at age 12 after he poured kerosene onto live coals in the kitchen range, resulting in an explosion and flames that killed him. That left Fred, his brother, Charles, and sister, Mae, in the care of their mother. 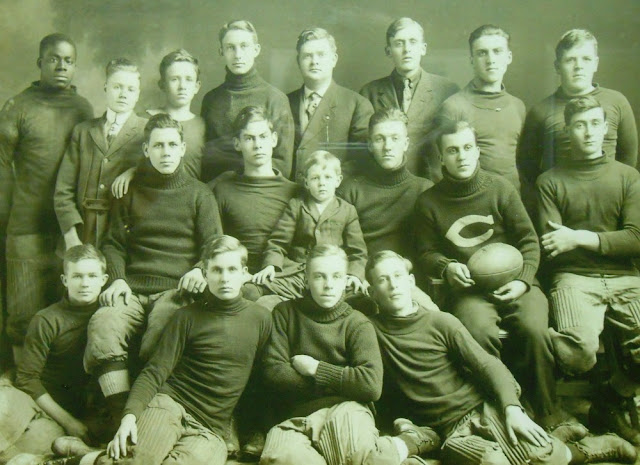 Fred was extremely popular and a football standout prior to his graduation from Chariton High School with the class of 1914. He was a member of the 1913 South Central Iowa Championship football team --- at far right in the back row of this photograph. When Fred died, four other members of this team were in uniform --- Maceo Richmond and Earl Lowe, standing shoulder to shoulder at the other end of the back row; Kirk Jones (captain), second from right in the second row; and  Dayton Piper, second from right in the front row.

A failed business venture (a livery stable just northwest of the square) and a failed marriage followed high school, however, and by 1918 --- when he was drafted --- Fred was living in Story County and working for a cousin who owned a farm there.

Assigned to the Veterinary Medicine Detachment of the 605th Engineers, Fred set sail for France with his unit aboard the George Washington from Hoboken, New Jersey, on Sept. 30, 1918. A few days later he came down with influenza and on Oct. 9 died aboard ship of pneumonia, one of its complications.

He was not buried at sea, as one of his two Find A Grave entries states, but instead his remains were delivered to U.S. military authorities soon after the George Washington docked and placed in a temporary grave nearby.

Fred's mother did not learn of his death until late October and World War I had ended by the time memorial services were held at Chariton's First Presbyterian Church on Sunday evening, Dec. 8. Here is a report of that service from The Herald-Patriot of Dec. 12:


A memorial service in honor of Fred Culbertson was held at the First Presbyterian church Sunday evening and was largely attended. The church was decorated for the occasion with flags. Special music was rendered by the choir and a splendid sermon was delivered by the pastor, Rev. Chas. W. McClelland. The blue star on the service flag was changed to a gold one, the change being made by Walter Scott, of Montana, who was recently discharged from the military service. Mrs. Culbertson was presented with a beautiful bouquet of flowers by the ladies of the church. The following biography of the deceased was read:

Fred Aurelius Culbertson was born three miles north of Chariton on the 8th day of March, 1895, and died of pneumonia, on board ship on his way to France, aged 28 years, 7 months and 1 day. When Fred was nine months old his parents moved to Chariton, where he lived until two years ago, when he went to Ames to assist his cousin, Mr. Lou Champlin, on the farm. He attended the grade schools of Chariton and was graduated with the class of 1914 of the local high school in which institution he was a leader in all student activities.

At the age of 14 he united with the First Presbyterian church, where his membership was at the time of his death. He was of a genial, pleasant disposition and won many friends who learned with deep regret of his sudden leaving. Beside the mother, he leaves to mourn his absence a brother, Charles, and a sister, Mae, both of Chicago; a baby sister and a brother,Leonard, and his father having preceded him in death.

He was called into the service of his country early in the summer but was granted an extension of time in order that he might save his mother's life by giving of his blood for transfusion. When his mother was well on the road to recovery he left, August 28th, for Camp Forest, Georgia. Here he soon passed his overseas examination and was transferred to the Medical Veterinary department, 605 Engineers. He was then sent to Camp Upton, N.Y., from which place he sailed for "somewhere in France" Sept. 28. Nothing more was heard from him or concerning him until October 28th, when a telegram came telling of his death at sea on October 9th. The body was taken charge of my the military authorities and now lies at rest somewhere beneath the blood-stained soil of France. (Dec. 12, 1918)

Less than a year after Fred's death, his mother, Hattie, died at age 53 at Methodist Hospital in Des Moines of the chronic illness that had plagued her for several years. Her death probably was the principal reason the surviving children, Charles and Mae, decided to have their brothers' remains permanently interred in France rather than bringing them home to Chariton, where by this time neither was living.

The Oise-Aisne American Cemetery had been established during August of 1918 by the 42nd Infantry Division as a temporary battlefield cemetery. Congress authorized its retention as a permanent cemetery during 1921. It is the second largest of the eight American World War I cemeteries on foreign soil. Meuse-Argonne, with 14,246 burials, is the largest.

A majority of the 6,012 war dead buried at Oise-Aisne, including 597 unknowns, died fighting along the Ourcq River and in the area between the cemetery and the Oise River during the Aisne-Marne Offensive and the Oise-Aisne Offensive.

During 1922, however, the remains of many other American servicemen who had been buried during the war west of Tours-Romorantin-Paris-LeHarve, including those of Pvt. Culbertson, were disinterred and reburied here if their families has requested permanent interment overseas.

And so a grave-size plot of French soil here remains forever Lucas County.