The Underground Railroad at Melrose, Part 1 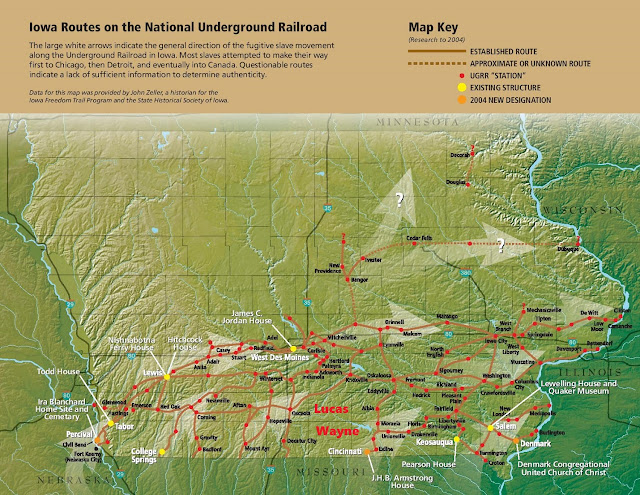 Those of us in Lucas and neighboring Wayne counties hang our heads in collective local history shame when the topic of southern Iowa's role in the Underground Railroad comes up.

In the years before and during the Civil War, the four southern tiers of Iowa counties were on the front line as abolitionist organizers and their friends transported enslaved men, women and children from the Iowa-Missouri border north then east to the Mississippi River and beyond.

But if you look at recent maps of Iowa routes and stations, developed as Underground Railroad research accelerated, you'll note that Lucas and Wayne are blank, save for the shadow of a route that possibly cut across far northwest Lucas en route to Knoxville.

Lowell J. Soike, in his excellent 2013 "Necessary Courage: Iowa's Underground Railroad in the Struggle against Slavery," gives a possible clue to the reasons when he suggests quite accurately that south central Iowa had "greater percentages of Southern-born settlers who were hostile to those who opposed slavery," mentioning Davis, Appanoose, Wayne (and by extension Lucas) and Decatur counties specifically.

"Although Southern migrants to south-central Iowa had no time for those who would meddle in the right to own slaves elsewhere and would not help blacks in any way," Soike writes, "they did not necessarily endorse slavery. These conservative Democrats did not want Iowa to adopt the institution, but they did not especially care if it was adopted by settlers in the western territories, as long as residents there approved it. They also strongly opposed free blacks moving into Iowa."

None-the-less, Underground Railroad activity was present in Davis, Appanoose and Decatur counties and there's no reason to believe that it was not present in Wayne and Lucas counties, too. But the clues are few and far between --- and I've certainly not located a station or a route in Lucas County.

But I have come close --- and have been entertaining myself lately by seeing what I could find out about Thomas C. and Philomena Philadelphia Stuart's Underground Railroad station immediately north of Melrose,  in Monroe County just east of Lucas County's eastern line.

An Underground Railroad route through Albia already has been established. It's generally thought that this route, or "track," originated at Cincinnati, on the Missouri border in far south Appanoose County, then continued north from Albia to cross the Des Moines River at Eddyville en route to Oskaloosa. There were other routes from Cincinnati, however, especially one northeast to Drakesville, so the Albia station may not have been especially busy.

But the track through Melrose was more westerly and by some accounts busier. It seems to have headed due north from Melrose, perhaps to Knoxville, before joining established routes eastward to Oskaloosa or north to Grinnell via Lynnville.

We do not, however, know where the Melrose track originated. It's too far west to have carried traffic from Cincinnati, so the entry point into Iowa most likely was in the far southwest corner of Appanoose County or Wayne County. It also is possible that the track passed through Lucas County, too. It's even possible that the track followed the middle route of the old Mormon Trail all the way from Decatur County. All of this is pure speculation.

But we do know a few things about the the Melrose station thanks to the writings near 1900 of Alpheus R. Barnes, then editor and publisher of The Albia Union, and son of Andrew Curtis Barnes --- printer, publisher, Methodist preacher, abolitionist and Underground Railroad "agent" in Albia.

A.C., hankering to come west, brought his wife and two teen-age sons to Albia during 1854, traveling from Brookville, Indiana, by horse and wagon.

Until shortly before moving west, A.C. had been working as foreman of the Brookville, American. Before accepting a job there, he had owned and published The Ripley County Whig in Versailles, but closed that publication and packed away his Washington hand press and cases of type before accepting the better-paying proposition in Brookville. He also had been licensed to preach by the Methodist Episcopal Church.

I'll come back to A.C. and the story of the family's trek west in another post, since it is an interesting  tale that offers insight into both Monroe and Lucas counties during the first years of EuroAmerican settlement.

But to make a longer story short now, there was no newspaper in Albia when the Barnes Family arrived --- most likely none being published west of the Des Moines River save in the region around Council Bluffs, where Mormon emigrants had settled.

Andrew was prevailed upon by his new neighbors in Albia to send for his press and type, stored in Indiana, and once it arrived --- hauled by riverboat to Keokuk and then overland by ox-drawn wagon to Albia --- he launched south central Iowa's first newspaper, The Independent Press, on Oct. 10, 1854.

Some 60 years later, his son, Alpheus, delivered a lengthy address during the August, 1913, Southern Iowa Editorial Convention in Keokuk and during it described his father's abolitionist stance, as announced in the first edition of The Press.

"The salutatory proclaimed the rigid independence of the paper, save only on two points --- it was utterly opposed to negro slavery and the liquor traffic --- the twin relics of barbarism," Alpheus said. "This led to a great deal of criticism on the part of some of the leaders in the community and the withholding of patronage. It was regarded as an interference with men who owned such "property" and was an abridgment of men's rights to drink and eat whatever their appetites craved. There was another element of citizenship who approved the editor's views on these two questions, but if all these citizens of the town and county had supported the paper with money and influence to the extent of their ability, the support would have been meager indeed.

"My father stood his ground," Alpheus continued --- noting here his father's role in the Underground Railroad and the Stuart station at Melrose --- "and was the station agent of the underground railway in Albia, though the main route for slaves hunting their way to freedom was through the town of Melrose, fifteen miles west of Albia. The father of the noted Chariton lawyers --- the Stuart brothers --- was the agent of the underground railway at Melrose."