Sgt. Jerry Parker: He died in his buddy's arms 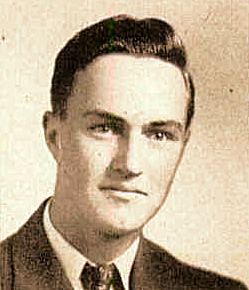 I've written before about several of these men, but never extensively about Jerry Parker, who was a distant cousin and grew up in the Benton Township neighborhood where my father was born and raised.

Jerry's parents were Chester Alan and Ethel (Hull) Parker. He was born Nov. 24, 1927, attended the Myers country school and then enrolled at Chariton High School. During the early 1940s, the family moved to northern Iowa and Jerry enrolled at Fort Dodge High School where he graduated with the class of 1947, somewhat older than a majority of his classmates. That's his high school graduation photo at left.

By that time, his parents and brother, Gail, had settled permanently on a farm near Britt in Hancock County and Jerry went to work out of Britt for the Iowa Highway Commission.

My father used to talk about this and I believe he said most of the children were afflicted with some sort of heredity disorder that made them susceptible to diseases and disorders that others would have survived. But of course I was not listening as carefully as I should have been and cannot recall exactly.

During January of 1956, some years after the war in Korea ended, Jerry's repatriated remains were buried in the Russell Cemetery, too --- after funeral services at First Baptist Church --- bringing the number of Parker sons interred there to seven.

Jerry was living in Britt when he enlisted on Dec. 29, 1948, and during August of 1950 he was deployed to Korea as a gunner, Battery C, 38th Field Artillery Battalion, 2nd Infantry Division.

On Nov. 26, 1950, he was captured in the vicinity of the Chongchon River and listed as missing in action, information that was shared soon after with his family in Britt. Fellow Lucas Countyan Lyle Shelton was fatally wounded nearby on that date; Manual Spoon and Roy Kirton, captured and imprisoned four days later.

Word of their son's death did not reach the Parkers until October of 1953 --- and not from the U.S. government, but instead from a recently released prisoner of war who had been holding their son in his arms when he died. That meeting was reported on Page 1 of The Chariton Leader of Oct. 13, 1953, as follows:

Mr. and Mrs. Alan Parker of Britt, Lucas county residents until five years ago, have received information through a returned prisoner of war that their son, Sgt. Jerry Parker, died in a communist prison camp on March 9, 1951. He has been listed as missing in action in Korea since Nov. 26, 1950.

Many relatives of the Parkers, particularly the Gookin and Hull families, are Lucas county residents.

No official word as to the fate of their son has been received since he was listed as missing.

It was not until M-Sgt. Robert Ashpole of Albert Lea, Minn., a returned POW from Korea, visited the Parkers at their farm home that they learned of their son's death.

M-Sgt. Ashpole and Sgt. Parker had been buddies in service to the end. Parker enlisted on Dec. 29, 1948. He received his army training in the States and in August of 1950 went to Korea for active duty. He was in the second division which was all cut up and the boys started wandering behind the enemy lines.

The group with Ashpole and Parker was taken into Red prisoner camp No. 5. Sgt. Parker had flesh wounds and shortly after becoming a war prisoner became ill from acute dysentery. The boys had no winter clothing and were living on cracked corn, barley and rice. The buddies saved their rice to give to Jerry. He recovered from his wounds and also his illness.

Two and a half or three months later, Sgt. Parker developed a case of double pneumonia and his old illness returned. Despite the efforts of his prison camp buddies to save him, death came March 9, 1951, as he rested in the arms of M-Sgt. Ashpole. The two boys had been together since the beginning of their service careers.

Ashpole saw that his friend was buried in a good grave on a little hill with another buddy so that when the remains of war prisoner dead are returned to the states, Sgt. Parker's grave will be easily located. 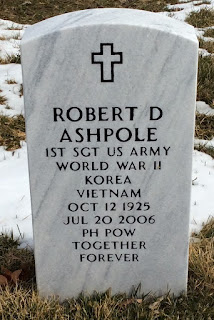 Sgt. Parker's remains eventually were recovered from the grave where his buddies had left them and returned to Woodman Funeral Home in Russell during January of 1956. Funeral services were held at First Baptist Church on Jan. 22.

After that, Alan and Ethel Parker returned to Britt where they lived out their lives. He passed during 1978 and she died during 1980. They are buried in Britt's Evergreen cemetery.

Gail Parker married and made Britt his home, raising two children there. At 96, he continues to live in Britt.

Robert D. Ashpole was career Army. Already a veteran of World War II when captured with Jerry he went on to serve 30 years --- three wars, World War II, Korea and Vietnam --- earning three purple hearts and three bronze stars. He died July 20, 2006, at the age of 80 and is  buried at Fort Snelling National Cemetery with his wife, Anna Mae.