Banking furniture, modern in every respect 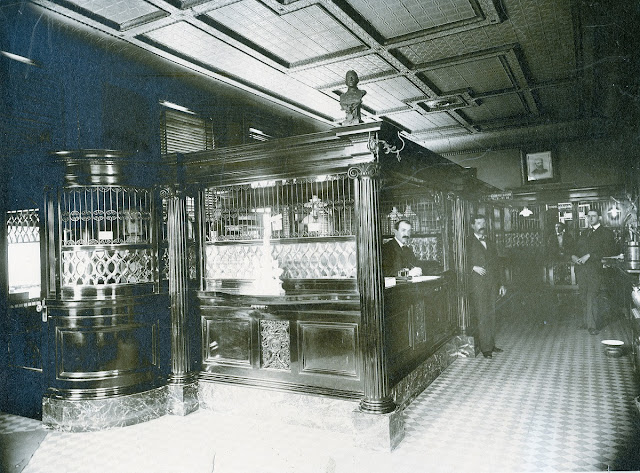 I've used these images of First National Bank and the Union Block, in which it was located, a few times previously. Both are from the Lucas County Historical Society collection. But this week, I happened upon an article in The Chariton Patriot of Sept. 21, 1899, that describes the over-the-top decor installed in the banking room during that long ago late summer.

Solid mahogany, you say? That's fairly impressive. These fixtures --- and the Union Block itself --- have long since vanished. And banks just don't look like this any more.

First National had moved into the Union Block during the first week of March 1882, immediately upon completion of the three-story building on the northwest corner of the square --- a project of the Masonic and I.O.O.F. lodges and a private investor or two. So perhaps it was time to refurnish and redecorate.

Keep in mind while reading this, however, that First National would go belly-up seven years later, as of Nov. 1, 1907, after cashier Frank Crocker killed himself and it became evident that he had been wildly improvident with bank resources. A new National Bank eventually rose from the ashes and took over the location. Midwest Heritage Bank, now located a block west, is its lineal descendant.

The men in the photograph are (from left) Frank R. Crocker, Willard P. Beem, W. Bert Beem and Clarence Blake. That's Smith H. Mallory looking down from a frame over the vault (this portrait, too, is at the historical society). Here's the article:

The First National Bank moved into temporary quarters on the east side of Main street, adjoining Braderick's cabinet shop, on Monday, while a force of skilled mechanics took possession of the banking room in the Union block, and are refitting it with a modern office equipment commensurate with the importance and increasing demands of the business, the bank having for some years put aside a part of their earnings looking forward to these improvements.

A Patriot reporter, while out on an observation tour, took a look at the new furniture and fixtures now being arranged. The double front doors have been removed and a massive single copper door with handsome frame and appropriate finish takes their place, very materially improving the front appearance as observed from the street. Inside a complete transformation in the arrangement and style of the fixtures attract attention. As you enter, the first change noted is the lobby on the north side of the room --- a complete reversal of the former location. An elegant set of solid mahogany banking furniture, modern in every respect, elicits admiration not only for its handsome design and finish, but for completeness in every detail as well as admirable adaption in the greater facilities afforded for handling the ever growing volume of business of the bank.

As you enter, the office of F. R. Crocker, cashier, is first reached. It is a neat, well arranged compartment, accessible to all having business with the cashier; no glass or other partitions rise above the surrounding counter, thus affording easy communication with that officer. A door on the east end leads to a passage way along the south side by which the different apartments are reached.

Adjoining the cashier's room is the apartment of the assistant cashier, W.P. Beem, where all the cash is received and paid. Next is the collection and draft issuing department, in charge of W.B. Beem; while across the west end and immediately in front of the vault, said to be the handsomest in Iowa, is the book-keeper's desk presided over by A.D. Gray. The president's and directors' rooms are the same as formerly. Altogether the improvements are substantial and in harmony with the solid character and prosperity of the bank. The public will find added facilities for handling their business in the improvements herein noted, but the uniform courtesy, accommodating spirit, and capable management on the part of the officers of the bank will be in no wise changed because of the new and better surroundings.

Having somewhat elaborately described the bank's new clothes, a word or two about the institution itself may not be inappropriate.

In another column of this issue will be found a report of the condition of the First National Bank at the close of business Sept. 7, 1899. The report shows a line of deposits greater than the combined bank deposits of such cities as Creston, Albia, Corydon, Fairfield, Red Oak, Indianola or Knoxville, aside from its special Woodman fund. The total deposits aggregate the great sum of over $900,000, the cash resources being about half a million, an evidence of the confidence of the people in the bank's stability and growth. The First National is an evolution from the private bank of Coolbaugh & Brooks, established in 1859, later owned by F.W. Brooks, and passing into the hands of Lyman, Cook & Co., with Edward A. Temple as cashier when it was organized as a National Bank in 1890. The first officers were  S.H. Mallory, president; Edward A. Temple, cashier; Lyman Cook, J.C. Bailey, C.E. Perkins of Burlington, and Joseph Braden of Chariton, directors.

The bank renewed its charter in 1890 for twenty years, half of which has now passed. The history of this bank is very closely connected with the advancement of the best interest of Lucas county and the city of Chariton. It has loyally sustained all the public interests as well as generously aiding private enterprise. Through all the ups and downs of financial changes, it has distressed no borrower by forcing him to sacrifice property to meet his obligation due the bank. During the panic of 1893 when it was almost impossible to obtain money at any rate, the First National, notwithstanding the stringency, took the court house bonds at a low rate and carried them, insuring the continuance of the work without cessation.

With possibly one exception, the county, city or school district has never issued a bond which the bank has not purchased or negotiated. Next to the C.B. & Q. railroad company and S.H. Mallory, this bank pays more taxes than any other institution, firm or individual in the county, and has never sought by evasion to escape payment of its just share of the public revenues.

The present officers and employees are: S.H. Mallory, president; Joseph Braden, vice-president; F.R. Crocker, cashier, W.P. Beem, assistant cashier; W.B. Beem, collector; A.D. Gray, book-keeper; and May B. Waynick, stenographer. It is unnecessary to enlarge upon these people personally. Always keeping absolute faith with the public, not a word could be said which can add to the respect and confidence entertained for them. Their character and standing are co-extensive with the splended record of the institution over which they preside, the success of which is a matter of pride to every citizen and an unfailing source of strength to all our business interests.