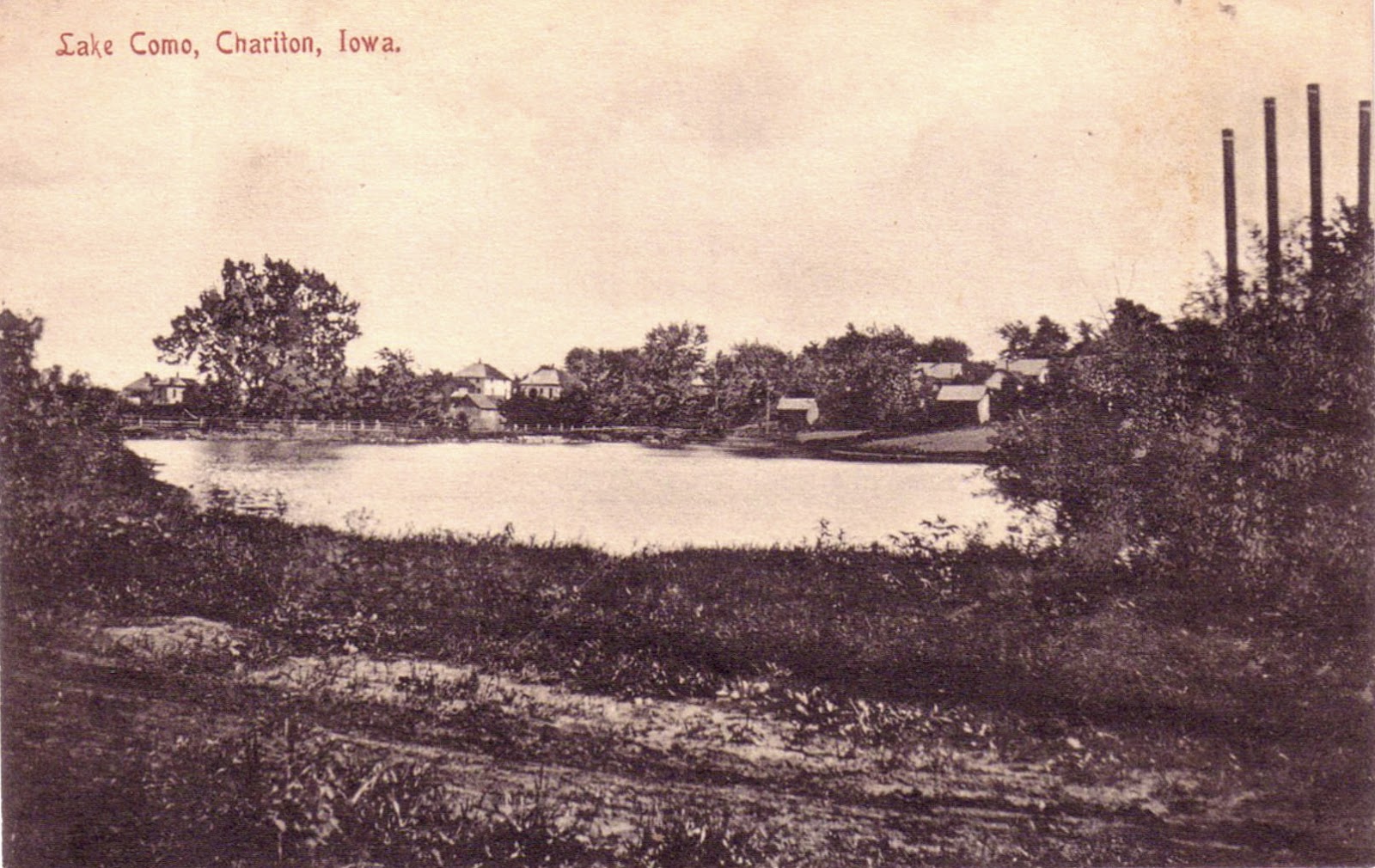 So I was going to stop at Yocom Park and take a few photos late Saturday afternoon, then decided to do an hour's worth of errands first --- and by the time I got done the sun had gone under and it was looking  grim. So I just came home.

Which is why we're going to have to settle this morning for Yocom Park as it looked ca. 1900 --- honest --- when it was known by the optimistic as Lake Como and by pessimists as that danged dirty pond that's ruining our electric light plant.

This postcard view was photographed near what now is the intersection of North 7th Street and Roland Avenue, looking southeast. The dam is to the left; houses fronting on Court Avenue in the distance; and the smokestacks of the power plant, immediately along North 7th, to the right.

Somewhat later the area was known as a city disgrace, aka the dump; then after an intensive city-wide improvement effort in the 1920s as East Park; and now as Yocom Park, in honor of Dr. Albert L. Yocom Jr. (1886-1968), whose Yocom Hospital was just a block to the west.

I'm bringing this all up now because there are some rumblings out there about efforts to renew the park, which I think is a wonderful idea --- and I'd forgotten the timeline details for this innovative but now often-overlooked area.

There's nothing critically wrong with the park --- the playground, shelter and restrooms are in good condition. But the majority of the park, originally a highly developed, terraced amphitheater arrangement around playing fields and tennis courts, is in need of love. The courts are seriously deteriorated, access from the east is challenging and the rest usually underutilized.

Back in the good old days --- aka when I was a kid --- baseball was played here under lights, music and other festivals were held, children played and after dark on the 4th of July we all walked the two blocks down from the square, found places to sit on the terraced embankments and watched the fireworks.

Back in the 1880s, when Chariton was lighted at night with kerosene streetlights, no one had quite figured out what to do with this low-lying area that served mainly to catch runoff from higher ground and channel it east and north to --- eventually --- Little White Breast Creek.

Then, during the late 1880s as city leaders worked to bring public electricity to town, it occurred to the amateur engineers involved in the project that this would be a good site for a coal-fired power plant located alongside a big pond to provide water for its boilers.

During July of 1889, Chariton voters approved the sale of $13,000 in bonds to finance the project. Work began immediately --- the pond was excavated and the dam along the east property line built, the plant was constructed and equipped and it began operations during December of that year. 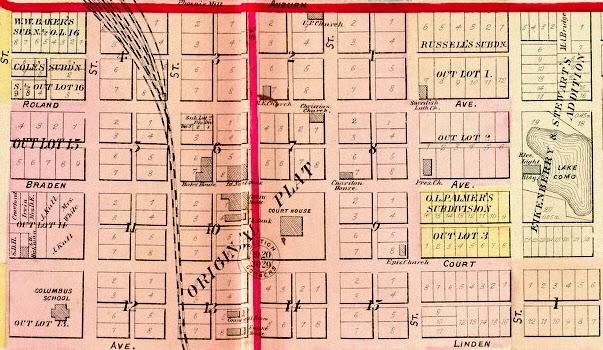 Unfortunately, there were problems from the start. The project cost $21,000 rather than $13,000 and that started a history of debt that was never resolved during the 25 years the city operated the plant.

In addition, the plant's equipment was insufficient to meet the growing demand for electric power. So in 1892 an addition was made to the plant, a new 200-horsepower engine, another dynamo and related equipment installed. This increased the plant's debt load.

Another major issue involved the dirty untreated water from the pond piped into the plant to fill the boilers. the equipment did not cope well with the quality of the water and the need for expensive repairs and occasional rebuilding was constant.

Finally, the plant should have been built near the C.B.&Q. rail lines and yards in west Chariton. It was thought originally that chunk coal from local mines could be utilized to power the plant. As it turned out the type of coal needed arrived in town by rail and because of the plant's east-side location, the city had to maintain an expensive dray operation to keep it supplied.

Many of the city fathers recognized almost from the beginning that they were in over their head and efforts began in 1894 to convince voters that the plant should be sold to private contractors with experience in generating and distributing power. It took 20 years, however --- until 1914 --- to win approval to dispose of the plant and go out of the business of generating electricity.

In the meantime, "Lake Como" became a popular gathering place for summer picnics and winter ice skating. Commencing in the late 1890s, 4th of July fireworks were fired off from rafts set afloat on the pond.

There were occasional tragedies. The July 4, 1898, observance included a mock battle fought from rafts on the pond in commemoration of the Spanish American War, then in progress (Spain's Caribbean fleet was destroyed during the Battle of Santiago on July 3, 1898).

Although instructed by his parents not to do so, 15-year-old Harley Gartin, son of ex-sheriff C.F. and Lillian Gartin, clambered aboard one of the rafts, then fell off and drowned about 9 p.m.

Chariton did not have a municipal water supply during these years, so giant cisterns under the square collected water for use when buildings caught fire. Although the system didn't work well, water was pumped up from Lake Como when the cisterns ran dry.

After the sale of the plant, other arrangements to generate electricity were eventually made and use of the plant discontinued. It was demolished and the the pond and the area around it, still city-owned, largely abandoned. Eventually the pond was drained and residents began to use the area as a dump.

The 1922, when plans for reinventing the area as a park were launched, it was described as "one of the very few places in Chariton for which we need to blush. It is a blemish and so unsanitary as to amount to a nuisance."
Posted by Frank D. Myers at 7:15 AM

Frank, you always present fascinating hisory that few of us know. Thank you.

Fascinating. I just remember the great ampitheatre for fireworks. It was spectacular!

oh my goodness, I don't remember hearing any of this history. My dad's mom and aunt lived in the two houses south of the park and in the 50's - 60's we would watch the fireworks from grandma's back porch and go down to the park. We always had a bathroom available though.I love reading this.