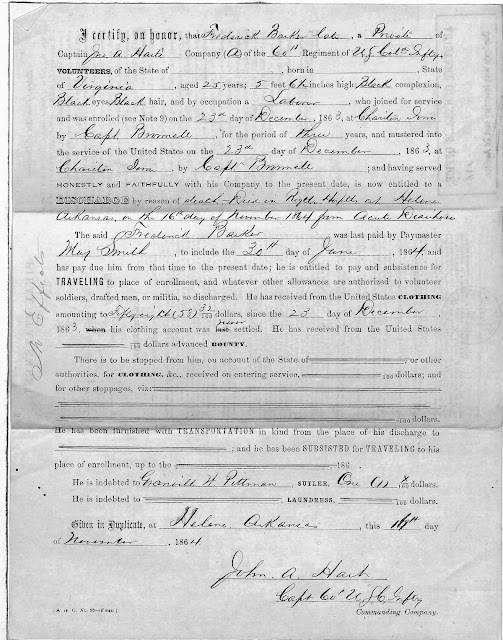 It's embarrassing to admit, but I had overlooked until recently Pvt. Frederick Baker, 25, Co. A, 60th Iowa Volunteer Colored Infantry --- the only black Lucas Countyan to die while in service during the Civil War.

Pvt. Baker died of chronic diarrhea, as so many of his comrades did, on Nov. 16, 1864, at a regimental hospital, Helena, Arkansas, after 11 months of honorable service. Buried nearby initially, his remains would have been relocated after the war to Memphis National Cemetery to rest among the "unknowns."

I found his name and hometown serendipitously while examining (online) company rosters for the regiment in which he served. Then, thanks to wonders of digital technology, was able to locate his service records and discover a little more.

Frederick probably hadn't lived in Lucas County long prior to Dec. 23, 1863, when he enlisted and was mustered into a company of recruits for Iowa's first (and only) regiment of black enlisted men --- known initially as the 1st Regiment Iowa Volunteer Infantry (African Descent).

Because of conflicting information in his service record, it's not clear where his enlistment occurred. Some records give the location as Chariton; others, as Des Moines --- and the latter seems more likely. Capt. Samuel C. Brownell, a prominent Des Moines dentist of that era who was serving as provost marshal for Iowa's Fifth Congressional District, was the recruiting and mustering officer.

How did Frederick end up in Chariton? I don't know, but there is an intriguing possibility that I'll come back to a little later.

But if federal census records are to be believed, there were no black residents of Lucas County during 1860. By 1870, the county's black population stood at about 30. So a few black families and individuals had arrived during the war years or soon thereafter, most apparently from Missouri, a slave state even though it never quite managed to secede.

Frederick's occupation was given alternately as "laborer" and "farmer" --- most likely he was working as a farmhand near Chariton. His birth place was Virginia. And he was described as being 5 feet, 6-1/2 inches tall with black eyes and black hair.

Here's the intriguing possibility. Five days after Frederick enlisted, on Dec. 28, another young black man --- Clark P. Bailey, 21, of Green Bay Township, Clarke County, also enlisted and was mustered into the same company of recruits in Des Moines. Clarke County's Green Bay and neighboring Franklin townships are just down the road west of Lucas County's Last Chance. Those townships were home to members of the Smyrna Friends Meeting.

While there is no record of underground railroad activity among the Smyrna Friends, I've always had a suspicion that there might have been. So is it possible that both Frederick and Clark had followed an underground railroad route up out of Missouri, remained in the area for a time and then when presented with the opportunity to fight for the rights of their enslaved brothers and sisters in the Confederacy, made their way to Des Moines and enlisted? Keep an open mind. I really like this theory.

To back up just a little, black men had not been permitted to enlist in Iowa until late summer, 1863, when Iowa's first (and only) regiment of black troops was authorized --- for a whole range of reasons, including the advocacy of Muscatine's remarkable Alexander G. Clark, one of our state's earliest and premier civil rights leaders.

Keokuk was selected as the place to rendezvous, organize and train. The first six companies of the 1st Regiment Iowa Volunteer Infantry (African Descent) were mustered into federal service there on Oct. 11, 1863, and the unit moved downriver to St. Louis during November. Four more companies were added prior to the final company's muster on Dec. 4, 1863, in St. Louis.

By the time Frederick Baker and Clark Bailey enlisted, the unit already had been assitned to the Department of Arkansas, headquartered at Helena, where it would be reorganized on March 11, 1864, as the 60th Infantry Regiment U.S. Colored Troops. As was the case with all black units, the commissioned officers were white.

Frederick and Clark still were in Des Moines as late as Jan. 11, 1864, assigned to a recruit company. By Jan. 31, the recruits had been transported to Davenport and then were sent down the Mississippi to a recruit depot at Helena. Both were assigned to Company A on Feb. 11, a month before the 1st Iowa was reorganized as the 60th U.S.

Both men were present in their company and accounted for until July-August when Frederick was detached to serve on a scout mission, but he had rejoined his unit for September and October.

Clark seems to have remained with the company while Frederick was serving elsewhere, but become seriously ill during October and was a patient in the regimental hospital at Helena when he died of chronic dysentery on Oct. 25. Frederick was hospitalized there soon after and died on Nov. 16.

And so the two young Iowa men who had served together since December of 1863 died within a month of each other in Arkansas during the fall of 1864. Both were due to be paid when they died, but there is no indication in the service records to tell us who next of kin might have been.

A total of 1,153 men served in the 1st Iowa/60th U.S. between the time it was organized and Oct. 15, 1865, when troops were mustered out at Devall's Bluff, Arkansas. Of that number, one officer and eleven enlisted men were killed in combat or died of wounds. A total of 344 --- nearly a third --- died like Frederick and Clark of disease.

So far as I know, Frederick never has been included in any of the lists compiled by comrades and others of Lucas Countyans who died during the Civil War. That's not surprising. Few, if any, of Lucas County's white veterans would have known of his existence.

But his sacrifice for a state and a nation only beginning to grudgingly acknowledged his rights as a citizen at a time when he couldn't even vote deserves to be remembered.

Note: Frederick is carried officially on Civil War-era records as "Baker" although his name was written variously as "Baker" and "Barker" on documents in his service record. It is probable that he could neither read nor write.
Posted by Frank D. Myers at 6:23 AM