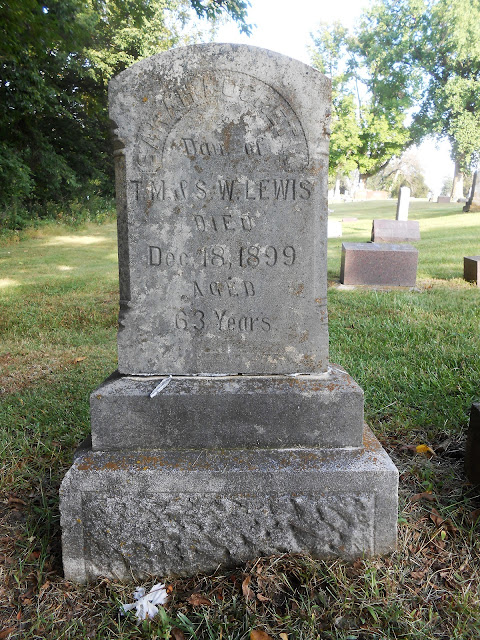 I wrote a little yesterday about Sarah Lucretia Lewis, known familiarly during her lifetime as "Lou,"  in relation to The Chariton Patriot, of which she was proprietor and publisher from 1883 until her death during 1899.

It was rare for a woman to be the sole owner and publisher of a newspaper during those years and I'd really like to know more about her. But Lucretia also was a Quaker of strong conviction and that was reflected in modesty about her accomplishments. So what we know comes largely from what others said about her.

She was born during 1836 in Chester County, Pennsylvania, to Thomas Massey and Susanna (Davis) Lewis, and was about 37 when she arrived in Chariton. Her three brothers, Elijah, Evan and Joseph had arrived in 1868 as owners and operators of the Phoenix Flouring Mill. then located at the intersection of North 11th Street and Auburn Avenue, west of the current location of Sacred Heart  Church. This was a substantial operation occupying roughly a quarter of a block and included a large mill pond to the north.

The Lewis brothers were joined in 1873 by their parents and two sisters, Hettie (1841-1880) and Lucretia. The family home was on the site of the much newer structure now located two houses north of Double-Dip on the east side of North Main. 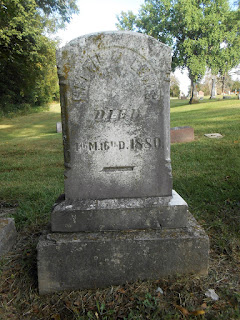 The family was Quaker and its members continued to live and practice their faith in Chariton even though there were not enough Friends in the area to gather a regular meeting. They did not affiliate with any of the congregations then flourishing in the community. One of the few physical indications of their convictions is the inscription on Hettie's tombstone where her date of death is inscribed in the traditional Quaker manner: 4th Month, 16th Day, 1880.

Lucretia's first job in Chariton was as clerk in the Lucas County treasurer's office, then in 1883 --- after the death of her father and younger sister --- she gathered her resources and purchased The Patriot from George W. Ragsdale. Brother Elijah was installed as editor and brother Evan, as his assistant.

Sarah was 63 when she died of tuberculosis 16 years later, on the 18th of December 1899, and specified in her will that The Patriot continue to be published by her estate so long as it was needed as a source of support for brother Evan and his son, Elijah H. Lewis Jr. Her mother had died at the age of 87 a year earlier.

Sarah's passing was noted in all three of Chariton's newspapers as well as in "The Friends Intelligencer & Journal," issued in Philadelphia on Twelfth Month 30, 1899. All of the memorials were plain and simple, in keeping with the character of their subject. Here's the obituary, probably written by her nephew, Elijah, and published in The Patriot of December 21. The funeral would have been a silent gathering of family and friends at the Lewis home with no officiant and no formal order, although some may have been moved to speak.

She was born in Willistown, Chester county, Pennsylvania, daughter of Thomas M. and Susannah W. Lewis, and came with the family to Chariton in 1873, where she has since resided.

The sad news of her death will be read with sorrowful regret by a large circle of relatives and many kind and sympathetic friends. She was well known to the people of Lucas county, having for several years filled the position of clerk in the county treasurer's office, and for the last sixteen years has been actively connected with the Patriot as proprietor and publisher.

It may be said of her that she performed all the duties coming to her in life with fidelity, and met every responsibility with the cheerfulness and courage befitting a strong and loveable character. To the family, though not unexpected, her death is an irreparable loss.

The sadness filling the Patriot household is relieved by the kind and loving sympathy of true and generous friends, and while bearing our own loss with what fortitude we may, we do not forget that the shadow which has fallen upon us has crossed the threshold of every home, and that ours is a sorrow common to all.

The funeral took place on Wednesday at 2 p.m. when all that was mortal of the loyal friend and dutiful daughter was laid to rest beside the father and mother and other loved ones who had gone before.