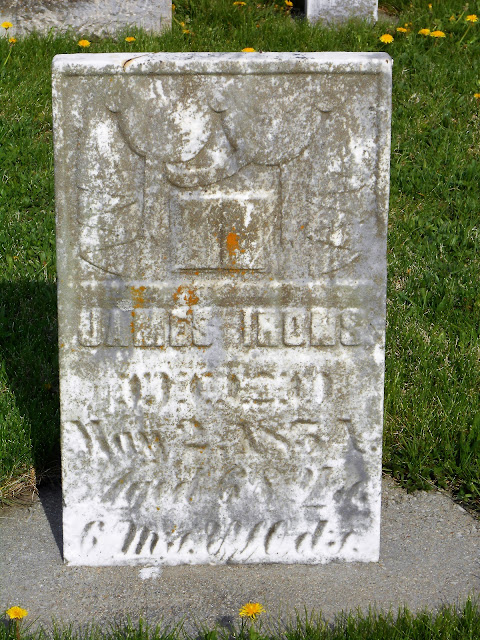 One more tombstone to look at --- that of War of 1812 veteran James Irons --- before leaving Lucas County's Strong Cemetery behind, for the time being. More than 160 years have worn the inscription down, but it reads:

More than a dozen --- my latest count is 14 --- War of 1812 veterans are buried in Lucas County. James was among the first to die, a dubious distinction that also made him one of the first pioneers in this area of northwest Pleasant Township to be buried here.

The first burial was that of little Levi Henry Strong, whose tombstone still stands not far from James' larger and more elaborate marker. Levi, born Dec. 13, 1851, to Thomas Lee and Mary Margaret Strong, reportedly was the first child born to permanent settlers in Pleasant Township as well as the first of those settlers  to die, age 16 months, on April 2, 1853. He was buried, most likely, quite near the Strong home. James was buried slightly more than a year later near him.

So this has always been Strong Cemetery, but it also has been known widely at various times as the Belinda Cemetery because the village of Belinda developed a mile south and, during the 1870s, Belinda Christian Church was built a half mile to the northeast. You may read more about Strong Cemetery's history by following the link to this post, "The view from Strong Cemetery."

We know that James was a veteran because he used a military warrant to claim 40 of the 240 acres of  Pleasant Township land he entered --- probably during the fall of 1851 --- at the federal land office in Fairfield. That warrant identifies him as a private in Capt. Blair's Company, First Regiment, Maryland Militia, War of 1812. The patent to this tract is dated March 10, 1852. 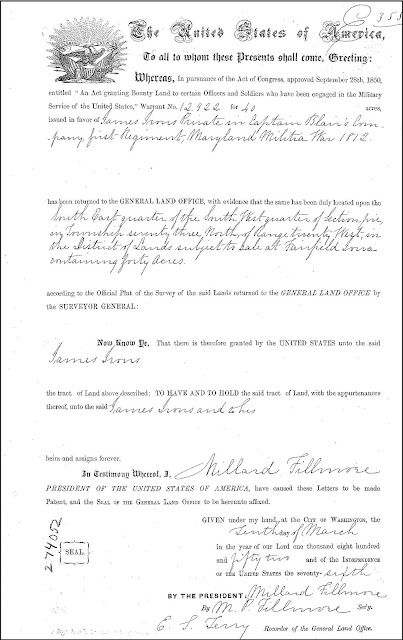 James purchased outright for $1.25 an acre an adjoining 40 acres, patent dated Nov. 1, 1852; and used another military warrant, this one purchased in Ohio from the veteran to whom it had been granted, William Gandy, 2nd Regiment, Ohio Volunteers, to claim an additional 160 acres just beyond. This patent was dated Jan. 1, 1852.

The land was located a half mile south of the spot where James was buried, the 40 acres purchased with his own military warrant encompassing the historic site of Pleasant Prairie United Methodist Church, the balance across what now is Highway 14 to the east.

James's home before he appears in Lucas County, Iowa, was in Harrison County, Ohio, in the east central portion of that state not far from the Ohio River.

He apparently was accompanied west during 1851 by his brother, Thomas Irons, also a veteran of Capt. Blair's Company, Maryland Militia, who used a military warrant of his own plus cash to purchase 200 acres of land in the same neighborhood.

We have no idea of the sequence of events after that. The brothers may have returned to Indiana after entering their land in Fairfield --- a relatively simple trip to the Mississippi River on horseback and then by riverboat down the Mississippi and up the Ohio. There's no indication that Thomas actually lived in Lucas County after that.


According to family trees published online by descendants, James was a son of the Rev. Thomas S. and Rebecca (White) Irons, born Oct. 22, 1784 in Allegany County, Maryland. By 1827, he had moved west to Harrison County, Ohio, where he married Eleanor Cree. The had at least four children, William H., Thomas L., Thornton and Emily. James and Eleanor and these four children were living together in Washington Township, Harrison County, when the 1850 census was taken.

The eldest son, William H., relocated to Lucas County from Ohio, apparently, during 1855. He purchased 80 acres of his own in Pleasant Township adjoining his father's land in Section 5, Pleasant Township (patent dated May 5, 1855). Still single, he was enumerated as a boarder in a household just across the county line in Marion in the 1856 Iowa census, stating that he had been a resident of the state for a year.

On Aug. 1, 1857, William married Margaret H. McCorkle in Marion County and they seem to have lived on the Marion County side of the line until after 1870, when they moved into Plelasant Township with their family.

When the Belinda Disciples of Christ purchased the tract of land where their first church building was built in 1873, William and Margaret owned the property. The Irons do not appear, however, on any of the Belinda membership rolls, held now by the Lucas County Historical Society.

During the 1890s, the Irons family moved southwest from Pleasant Township to Woods County, Oklahoma, where William died on Aug. 29, 1897. Margaret lived for more than 20 years after that, passing on Oct. 3, 1920. Both are buried in Good Hope Cemetery, Woods County.

James would have been considered quite old when he pioneered his way into Lucas County during the early 1850s and I wish we knew more of his story. But at the least we can be grateful that his family erected a fine tombstone in Strong Cemetery to commemorate his life.