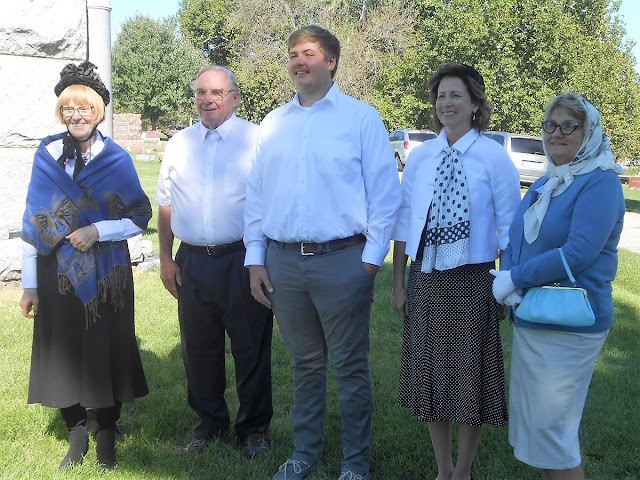 We couldn't have asked for more in regard to Sunday's 15th annual Chariton Cemetery Heritage Tour --- An exceptional cast, outstanding audience and ideal weather, a perfect early autumn day.

This year's theme was, "Where the Women are Strong and the Men are Good-looking." We gathered in the shade of a pine tree and with the Copeland Mausoleum as a backdrop and the crowd seated in chairs brought to the site and placed on the paved driveway. Presenters walked to the podium from their gravesites when introduced. Refreshments were served after as guests chatted with the performers and visited their gravesites and the new and nearby Potters Field monument, identifying the pretty hilltop where more than 175 people have been buried, most in unmarked graves, since the cemetery was established in 1864.

This is the fourth year we've handled the tour this way, moving from area to area in the Chariton Cemetery --- more than 13,000 burials on 40 landscaped acres, listed on the National Register of Historic Places as a National Historic District.

Before that, the tour roamed the cemetery every year, transporting guests from grave to grave on school buses. Then Iowa law regarding our ability to rent those buses changed and we lost that means of transportation. The new arrangement works well and makes it possible for those who have difficulty moving around or standing for long periods of time to participate.

The tour is sponsored by the Chariton Historic Preservation Commission and is that unfunded city commission's only source of revenue. Proceeds from the 2016 tour, at Potters Field, helped fund the new monument.

I'll post the scripts from this year's tour as the days pass, beginning with Rebecca Hobson Plympton Bell as presented by Florence Heacock: 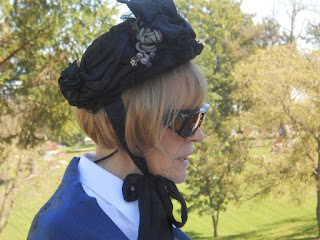 BACK IN THE SPRING of 1868, widowed by war and with an 8-year-old son to raise, I borrowed an ox team and plow and with my younger brothers broke 20 acres of Whitebreast Township prairie. We took turns --- one driving the oxen, one behind the breaking plow and the other cutting into furrows with an axe to plant corn. I was 43, half way through my 87 years, and knew about hardship and hard work.

I am Rebecca Hobson Bell Plympton, ladies and gentlemen, and if you conclude that a lady of leisure rests under that fine granite slab over there --- you are gravely mistaken.

MY PLACE OF BIRTH was Monroe County, Indiana, the year was 1826, and there I lived my first 23 years, receiving a decent education (for a girl) but in no hurry to marry. I’ve never been in a hurry to marry.

One of 11 children, I watched five of my siblings die as children. As a young woman, I witnessed my mother single-handedly support the six survivors, then contract a marriage she regretted bitterly. In the latter sense, I have been far luckier.

During 1849, my parents --- Joseph and Margaret Hobson --- decided to bring the family west. Older sister, Sarah, and her husband, George Mitchell, came, too. I was the eldest still at home. Richard, age 14, was next; little Lucinda was only 4.

The folks purchased 40 acres of land near Van Buren County’s Bonaparte that fall, but during December, disaster struck. The younger children came down with whooping cough and survived; Father died of it on Dec. 4, age just 54.

My mother was a strong woman and gave no thought to remarriage at the time, but set about, making do. I joined my little brothers in the field and we scratched out a living. She was determined that my father’s grave be marked and you can still see the fine tombstone we purchased for him in the Bonaparte Cemetery.

As the months passed, we heard from family who had settled farther west in Lucas County, where government land could be had for $1.25 an acre. Our cousin, Aaron Scott, lived southwest of Chariton; my aunt, Mary Howard, at Chariton Point; and the Mitchells had settled just west of the new county seat.

They implored us to join them and during 1852, following the death of Aunt Mary, Mother gathered enough cash to purchase 140 acres of unimproved land in Benton Township from Uncle John Howard and sent my brothers there to build a cabin and to break prairie for crops. We all moved into that cabin, just southwest of what now is Salem Cemetery, in the spring of 1854. Only the lone grave of a Mormon pioneer and a few others around it were located on what then was part of our farm.

WE PROSPERED on that prairie farm, but during 1858 --- when all her children were nearly grown --- Mother decided to remarry, accepting the proposal of an old man named Robert Stanley, then living with his children in Chariton. They married on Jan. 22, 1859, and he moved in --- determined to rule the roost.

There was not enough room in that house in more ways than one for three men --- my two brothers, now in their 20s, still were farming for Mother. I was caught in the middle, thought by now by most to be a hopeless spinster.

But then a young man named Nelson Bell who had recently settled near my sister and brother-in-law west of Chariton declared that he found me captivating and proposed. I thought him handsome and kind. On the 22nd of October, 1859, we married --- even though my brothers teased, “Becca’s taken herself a boy to raise.” Nelson was nine years younger you see, 24 to my 33.

We moved into a cabin on rented acres a mile and a half west of Chariton along a cow path you now call Highway 34. Our son, Cyrus Nelson Bell, was born there on the 20th of September, 1860.

THE CIVIL WAR changed all our lives, commencing in the spring of 1861. During May, the Lucas County Union Guards was organized at Chariton. Both my husband, Nelson, and his brother, John Bell, were among those who volunteered.

Most of the boys, including John, marched off on July 8, 1861, to be mustered into federal service as Company B, 6th Iowa Volunteer Infantry, but Nelson --- with an infant son --- was picked to remain behind and help fatherless families with their crops and other needs during what we thought would be a short and decisive war.

Nelson planted in the spring of 1862, harvested our small grain as summer passed, and then it was time for him to join Company B at Memphis, Tennessee. We said goodbye and he rode off, reaching Memphis on the 11th of September where he was reunited with his brother, then sent off on patrol in northern Mississippi.

During December, Nelson contracted pneumonia at Camp Yocana. He died there on the 20th. Brother John did not learn of his illness until he inquired, upon hearing the bugle call for a funeral, who the dead man was.

WE DID NOT LEARN back home of Nelson’s death for several weeks and then I had no choice. I packed what little I owned and we returned to my mother’s home in Benton Township. She had by this time sent her cantankerous new husband back to his children in Chariton. We spent the next six years there.

Nelson’s body was moved from Camp Yocana to a new national cemetery after the war, but his remains could not be identified. So I do not know where he rests.

We had kept his fine Union Guard dress uniform, however, left behind when he went off to war; and I had tintypes to remember him by, including a small broach bearing his image. These are now in the Lucas County Historical Society collection.

During those years in Benton Township, Cyrus and I watched as gangs of men prepared the grade and laid rail as the railroad was built west just north of Mother’s farm. Cyrus earned his first pennies carrying water and buttermilk to the workers. We were in Chariton during early July, 1867, when the first train pulled into town.

I put aside what I could of my widow’s pension and Cyrus’s orphan stipend until finally, in the spring of 1868, I could afford the down payment on 40 acres two miles northeast of Lucas on the Osceola Road near the stage stop called Tallahoma.

With help from my brothers, we broke the prairie and planted. I worked the fields and invested in cattle. We raised what we ate and in this manner, scratched out a living during Cyrus’s 8th through 12th years. I insisted that he attend school. Every evening, it was Cyrus’s job to saddle up, track down our free-range cattle that sometimes grazed their way for miles and bring them home.

WE WERE GREETED in this corner of Whitebreast Township by the best of neighbors --- Chester and Laura Plympton, who had moved from Sturbridge, Massachusetts, during the spring of 1864 with their children and lived just down the road. Chester was very prosperous and they both were very kind to us.

Sadly, during November of our first year in the neighborhood, Laura died at the age of 30, leaving Chester alone. During the next four years, our affection for each other deepened and in the spring of 1872 we decided to marry, despite my reservations. I seem to prefer younger men. I was 46 and Chester was 39. It was a mixed marriage, too. I was a practical Methodist; Chester, a high-minded Universalist. But we were compatible and our marriage endured for more than 40 years.

Chester provided many of the modest luxuries I had not been able to afford, but I was a good businesswoman, too. I managed my land; he managed his; and young Cyrus now had both a new home and a wage as farmhand from us both.

Cyrus married Florence Robbins during 1888 and they made their home on part on that 40 acres I purchased during 1868, raising four children there: James, Floyd, Edna (Mrs. Fred Rosa) and William. So now descendants of Nelson and Rebecca Bell are spread from coast to coast --- but I am content to rest here near my son with others of his family nearby. 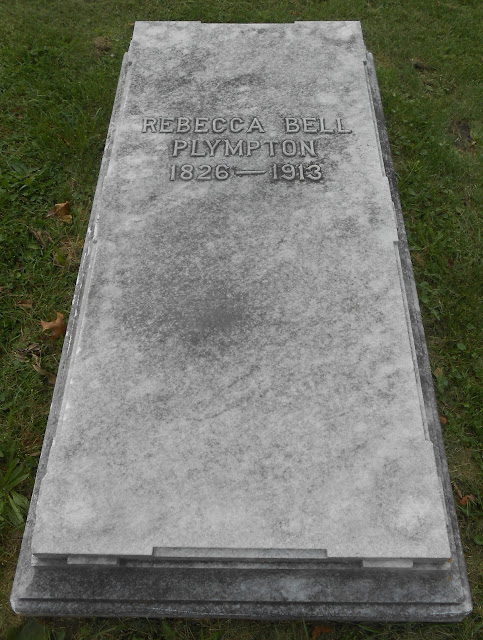