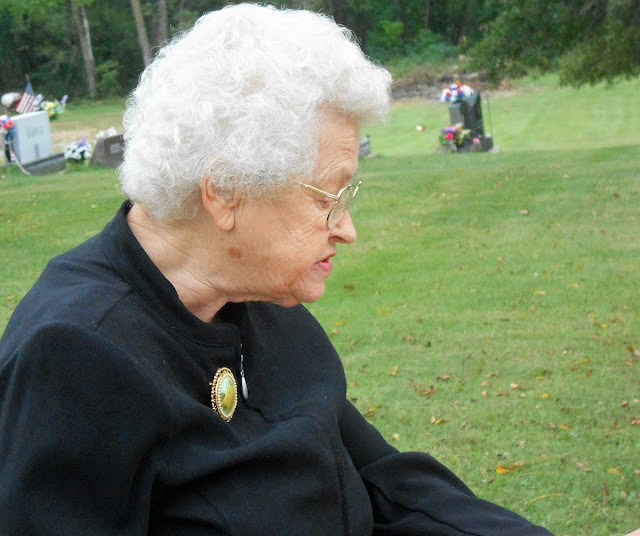 This is the second of five occasional posts that consist largely of the scripts used last Sunday during the Chariton Historic Preservation Commission's 13th annual Chariton Cemetery Heritage Tour, "Stories from Potter's Field."

Miriam Hibbs was the performer here, telling the story of Anna Sandahl, beloved wife and mother of four, who was buried in the Potter's Field during 1904 after circumstances had impoverished her family. Both Anna and her husband, Gus, were immigrants from Sweden.

I wonder sometimes that if we had just left Chariton after my husband was found “not guilty” of attempted murder in 1900, my life would have been longer and I would not have ended up here in Potter’s Field. As it is, I am forgotten, buried in an unmarked grave thousands of miles from my birthplace and hundreds of miles from the final resting places of Gus and our four sons.

My name is Anna Sophia Jonsdotter (Johnson) Sandahl and I was born on June 3, 1862, in the village of Skede, Jonkoping Lan, in southern Sweden. During 1889, when I was 27, I married Gustaf Alfred Zachrisson Sandahl and we set out almost immediately for America. Our destination was Rock County in north central Nebraska, where Gus’s brother, John Julian Sandahl, had settled some years earlier.

Gus was a carpenter and brick-layer by trade and for a number of years we followed his jobs --- to Long Pine, Nebraska, then to North Dakota, then to Villisca, Iowa, where we were living before our move to Chariton during the fall of 1899.

By that time we had four sons, Oscar, Garfield, Elmer and Albin, all under 10. Gus had a job on the bridge and building crew of the C.B.&Q. Railroad as did his brother, Carl, who had joined us in America during 1892.

We settled into a rented house in Chariton, shared with another Swedish family and other recent immigrants, and were welcomed warmly by Chariton’s large Swedish population, including our cousins, and by the pastor and congregation of the Swedish Lutheran Church --- now known as First Lutheran.

To make ends meet until the spring construction season began, Gus took a job cutting ice that winter from ponds in and near Chariton and transporting it to ice houses, where it was stored, packed in sawdust, for summer use.

That was where he encountered a young man named Tom Tuttle, who as it turned out was “Trouble with a capital T.” We never figured out why he had a grudge against Gus, although he was “English” and did not seem to like Swedish people.

Tom --- drunk and in need of money for a craps game --- knocked Miss Anna Hemming unconscious with a club and robbed her about 10 o’clock on the snowy night of February 28, 1900, as she was walking from the John Westling home after a social evening to the F.Q. Stuart home on South Main, where she worked as a maid.

Neighbors came to her aid and Tom was arrested and charged with the crime almost immediately. Tuttle confessed to the assault, but for some reason, he then claimed that Gus had hired him to kill Miss Hemming, concocting an elaborate story that my husband had offered him $2,000 from an expected inheritance.

Gus had never had so much as $200 at one time, let alone $2,000, and in no way stood to benefit from the young woman’s death. In addition, he was at home with his family and friends when the assault occurred.

But Gus was charged as an accomplice and jailed and Tuttle’s story grew more elaborate. Miss Hemming was convinced to identify Gus, claiming on the day after her assault that he had tried to strangle her after she had been knocked unconscious.

The trial was held during May and was the most notorious event in Chariton that year. People camped overnight in the courthouse lawn to ensure a seat in the courtroom, the judge had to order the door locked at times to prevent overcrowding.

The prosecution contended that Chariton’s Swedish community was conspiring to protect Gus --- in part we thought because of prejudice against “those foreigners” and the fact we generally spoke among ourselves and in church in the Swedish language.

The Swedish community certainly came to our aid, loaning me money so that we could eat while Gus was jailed, helping to raise his bond and then coming up with enough cash to hire an attorney to defend him --- James A. Campbell, the only lawyer in Chariton willing to represent him. But there was no conspiracy.

Fortunately for us, Campbell completely demolished the prosecution case during the trial, and on Saturday, May 19, the jury acquitted Gus. Tuttle was sentenced to six years at hard labor.

We talked about leaving Chariton after that, but we owed such a debt both financial and in gratitude to our friends and neighbors, we just couldn’t. In addition, I was sick after that terrible spring and the boys needed stability. So Gus found a tenant house for us on Maplewilde Farm, just west of town, and began to work to clear our debts.

My health declined, however, and on Saturday morning, Nov. 5, 1904, I died of heart trouble and a “complication of diseases.” My funeral was held on Sunday afternoon at the Swedish Lutheran Church and then I was buried here, in Potter’s Field.

Gus kept the family together until 1910, continuing to work to pay off our debts, and then moved north to Minneapolis for better-paying jobs, taking our eldest, Oscar, with him. After a few years, they continued farther north to the Iron Range.

Work as farm hands was found for the two middle boys, Garfield and Elmer, then 15 and 16, and the youngest, Albin, was taken in by his uncle and aunt, Carl and Ellen Sandahl, then living at Melrose.

Gus died on Jan. 29, 1940, in Red Wing, Minnesota, at the age of 72, and was buried in the Lutheran cemetery at Vasa, where both he and Oscar were living. Garfield was living in Wisconsin then; Elmer, in Sac City, Iowa; and Albin in Los Angeles.

I have generations of grandchildren now --- although none come to pay their respects at my grave, lost here in Potter's Field.
Posted by Frank D. Myers at 4:46 AM