Who in the world was John Scott? 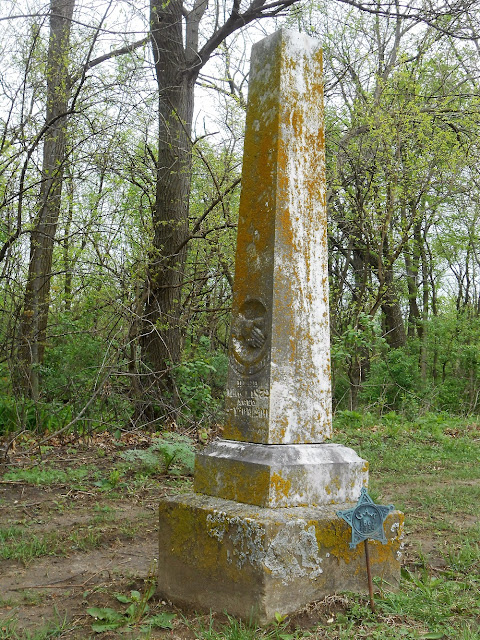 I got to wondering about John Scott last week while visiting the Richmond family lot in the northwest corner of the Chariton Cemetery. He's their neighbor, just to the west, but seems to have the east half of Lot No. 1 in Block 14, Original Division, to himself. His fine monument, the tallest in that area and right up against the tree line, looks a little lonely. 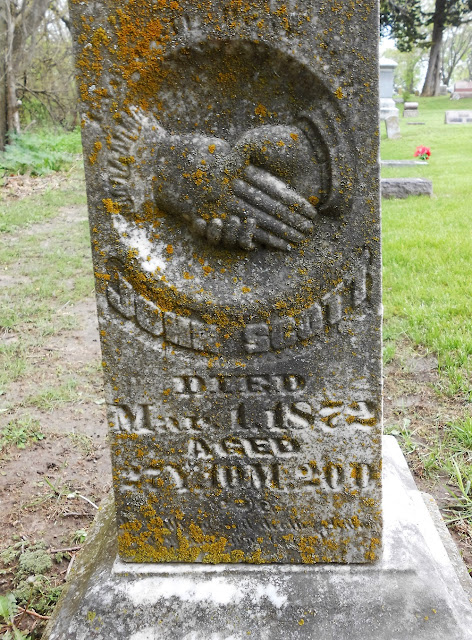 The inscription on the stone tells us that John died March 1, 1872, and that his age was 27 years, 10 months and 20 days. A Grand Army of the Republic flag holder next to the monument suggests that he was a veteran of the Civil War.

My first step was to check out the newspapers, figuring there must have been a story published about his demise. But as it turns out, The Democrat had ceased publication temporarily the previous year when publisher John V. Faith left town and issues of The Patriot for the first half of 1872 are missing. 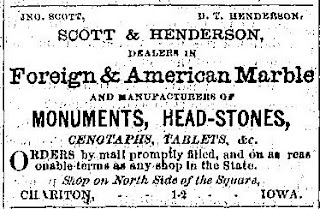 I did, however, find several mentions of John in issues of The Democrat between 1867 and 1871. As it turns out he was in the tombstone and monument business with a guy named D.T. Henderson, operating as Scott & Henderson. So I'm guessing that business was the source of his monument. Their advertisement appears in the earliest issues of The Democrat, so John must have arrived in Chariton soon after the Civil War.

I went to the 1870 federal census of Chariton and was able to locate John twice, once in the regular census at age 26, single, living in a boarding house with his occupation given as "marble dealer." And again, in a special "industrial census" taken that year. According to that census, Scott & Henderson had operating capital of $1,300, employed two people, had paid out wages totaling $850 during the previous year, had on hand raw marble valued at $1,000; and had manufactured 100 tombstones and 5 monuments during the year.

I also learned from The Democrat that John had another job, as part-time constable for the city of Chariton, and from county marriage records, that he and Ella Dennis had wed on May 28, 1871.

Then I hit a dead-end. John did not fit into any of the Scott families established in Lucas County. And although the G.A.R. flag-holder suggested that he was a veteran (these holders sometimes go adrift and alight next to tombstones where they don't really belong, so the presence of a flag holder is not a sure-fire guarantee of service), it was possible to determine that he had not enlisted for service from Lucas County. But there are a lot of John Scotts in the world and it seemed that figuring out which unit he had served with might be challenging.

Then it occurred to me that in was a common practice in turn-of-the-20th-century Chariton newspapers to list as Memorial Day neared the names and units of all veterans whose Chariton Cemetery graves would be decorated that year. So from those lists I discovered that John was a veteran of the 3rd Iowa Volunteer Cavalry.

So I went to the 1860 census of Jefferson County and found our John listed in the household of his parents, Malachi "Melchi" and Elizabeth (Clouse) Scott.

As it turns out Melchi Scott was a legendary Fairfield blacksmith known for the high level of his craftsmanship and his honesty. He also was an abolitionist. And the father of a noted criminal.

According to Jefferson County lore, Melchi was so honest --- and so dismayed by the criminal deeds of another son, Charles Clouse Scott, aka Frank Rande --- that he turned him in. Charles Scott had been implicated in the murders of up to five men when he hanged himself (or was assisted in hanging himself) on March 6, 1884, while serving a life term at the Illinois State Penitentiary in Joliet. He was described in newspaper reports of the day as, "the most cowardly ruffian that ever disgraced the annals of the West."

But this had nothing to do with our John, who had been laid to rest in his quiet grave in the Chariton Cemetery a dozen years earlier.

Having located our John in Fairfield, I then turned to the back files of The Fairfield Ledger to see if his 1872 death might have been mentioned there --- and hit paydirt. As it turned out the Ledger had picked up a story about John's death from The Chariton Patriot and republished it in his edition of March 21, 1872. Here's how it reads:

SUDDEN DEATH --- It becomes our painful duty this week to chronicle one of those sad events which always cast gloom over an entire community --- the sudden taking away from our midst, by the grim hand of death, of Mr. John Scott, one of our young and respected citizens. Mr. Scott died suddenly at his house about half past ten o'clock Saturday night last, from ossification of the heart. He had been in the enjoyment of good health up to the moment of his sudden demise. Saturday evening he was about to start out in the performance of his duties as night watch, in good health and spirits, but his wife persuaded him to lay down on a lounge for a short time, as it was not time to go on duty. After his laying down his wife noticed something strange in his breathing and tried to rouse him. She lifted him up, but his arms fell by his side, and with a gasp he died in her arms. Mr. Scott was 28 years of age and was universally esteemed in the community. He leaves a widow and one child only a few weeks old. The funeral took place Monday evening, having been postponed till the arrival of his parents from Fairfield. We extend our heartfelt sympathy to the widow and family of the deceased. --- Chariton Patriot, March 6th.

So now we know a little more about John Scott, at rest now for 144 years in a quiet corner of the Chariton Cemetery.

I enjoy reading your pets, especially the detail that you give about how you do your research.

That is very impressive detective work on your part. Good job!