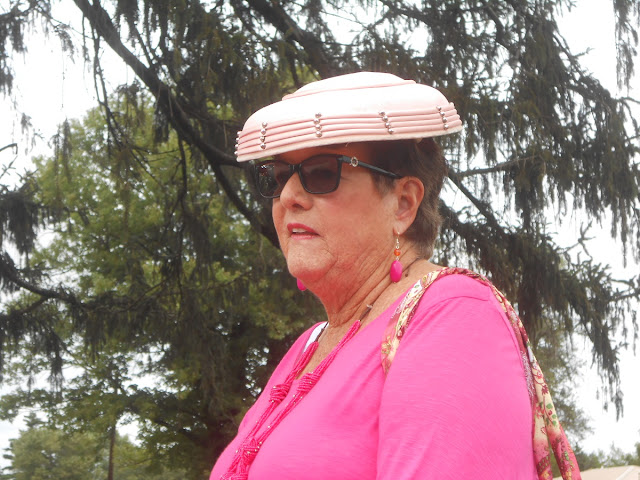 This is the sixth (and final) in a series of scripts used during last Sunday's 16th annual Chariton Cemetery Heritage Tour. The subject is Jeanette Sterett Cramer and the portrayer, Linda Braida.

I hesitated when asked to share my story this afternoon. There was a time when I was the topic of scandalized gossip in Chariton and Albia --- described as evil, sinister and coercive --- and that was a trial.

On the other hand, had it not been for my long-term affair with and subsequent marriage to a man once called Albia’s merchant prince, you would not have had a Ritz Theater or the fine building just west of it on the south side of our town square.

My name is Jeanette Sterett Cramer and in my time I was your classic “the other woman.” The husband with whom I share that tasteful tombstone across the road was Harry Judson Cramer. I always had good taste in clothing, men --- and granite.

Usually called Jenny by my family and friends, I was born on a farm in Decatur County during 1882 to Albert P. and Anna Sterett, but we were living in Humeston when my father died in 1901, when I was 19. After that, my mother and I moved to Albia at the behest of my brother, Perry, who was in business there.

I found a job as clerk in the R.O. Cramer & Son Dry Goods and Department Store, one of southern Iowa’s largest, on the south side of the Albia square. I advanced rapidly to department head --- on my own merits I assure you. I was an astute business woman then and remained such all of my life. My strong suit was retail, especially women’s clothing and furnishings.

The store at the time was a partnership between Richard O. Cramer and his only son, Harry J. They were the second and third generations, respectively, to operate the firm. R.O. Cramer retired in 1909 and the business was retitled Harry J. Cramer & Co.

Harry, when I got to know him, was in his mid-30s and still a dashing and very attractive man. He had been known when somewhat younger as Albia’s merchant prince because of his good looks and his lavish (but not careless) spending habits.

He had married Estelle S. Wright during 1892 and they had one daughter, Helen. The Cramers always had the finest automobiles in Albia and, during 1905, built what was at the time the largest and most extravagant house in town. There was no doubt that Estelle was the social leader among the prominent younger women of Monroe County and the new Cramer home was the site of lavish entertaining.

I have biases, of course, but I believed until my dying day that had Estelle not become preoccupied with her position, her imaginary ailments and excessive solo travel --- and paid more attention to what Harry was up to --- the courses of all our lives would have been considerably different.

Harry and I became involved, but very discreetly, during those years in Albia.

In 1914, we decided that our situation would improve if Harry opened a branch store in Chariton that I would manage with, of course, his assistance. We rented a storefront on the north side of the square and opened the Cramer Woman’s Store. It was an immediate success and Harry divided his time between Albia and Chariton.

Harry had promised me marriage and, unlike some men who failed to carry through in situations like this, he delivered. During 1917, he informed Estelle of the situation and they agreed that what followed should be handled as discreetly as possible to avoid a public spectacle.

Harry sold his interest in the Albia store to his nephew, Albert Hollingshead, and settled generously with Estelle. In early 1919 he established residence in Tulsa, Oklahoma, were divorce was a rather simple matter, and on May 3, 1919, the marriage was dissolved. On May 23, 1919, Harry and I were married at Osceola, Nebraska, and returned to Chariton as husband and wife. Estelle, humiliated, moved to Des Moines.

During 1921, Harry and I had an opportunity to buy a three-front building on the south side of the square from the estate of my late neighbor here in the cemetery, Virginia Branner. We relocated Cramer’s Women’s Clothing Store there and moved into an upstairs flat.

Although business was flourishing, by 1927 Harry’s entrepreneurial juices were flowing again and he decided that Chariton needed a new state-of-the-art movie theatre more than it needed multiple clothing stores. So he had the east two-thirds of our building demolished and The Ritz constructed in its place. Our new home was an apartment upstairs. The new theater opened on Aug. 31, 1927, to rave reviews.

Three years later, during February of 1930, disaster struck. A fire broke out in the kitchen of a restaurant in the three-story Temple Building, our neighbor to the west, and spread rapidly. Chariton’s new Pierce Arrow fire truck failed to work and while Old Betsy managed to contain the flames as they spread east, the fire was not controlled until trucks arrived from nearby towns --- including Albia.

When all was said and done, the Temple Building and the remnant of our original building had been completely destroyed as had everything other than the façade of our new theater.

Harry moved quickly, however, and the theater was entirely rebuilt and ready for business on May 22, 1930. Immediately thereafter, a new building was constructed to the west. We called the apartments upstairs over both the Cramer Flats --- and the most commodious one became our new home.

All of this excitement had not been good for Harry’s heart. He had been experiencing difficulty since 1929 and suffered a fatal heart attack in our apartment during the early morning of Feb. 18, 1931, at the age of 60.

Harry’s original plan had been to leave me a life estate, then at my passing what remained would go to his daughter, Helen.

Upon the reading of the will, however, Helen and Estelle filed a malicious lawsuit in Lucas County District Court charging that the divorce and our marriage had been invalid and making vile allegations about my character. They apparently hoped to win the entire estate. Their lawyers, however, seem not to have been especially bright. I was entirely vindicated and in return for a small cash settlement and the transfer of some property in Albia forced them to surrender any further interest in what Harry left behind.

Newspapers in Chariton and Albia had splashed this sensational case across their front pages. I demanded, and received, equal play for its resolution.

After that, I settled down to lead a comfortable and contented life in Chariton until 1959, when I moved to Wesley Acres in Des Moines. I died there on June 24, 1966, and was buried here, next to Harry, behind that lovely stone. Estelle and Helen are buried in Glendale Cemetery in Des Moines, their graves marked by stones of underwhelming merit. 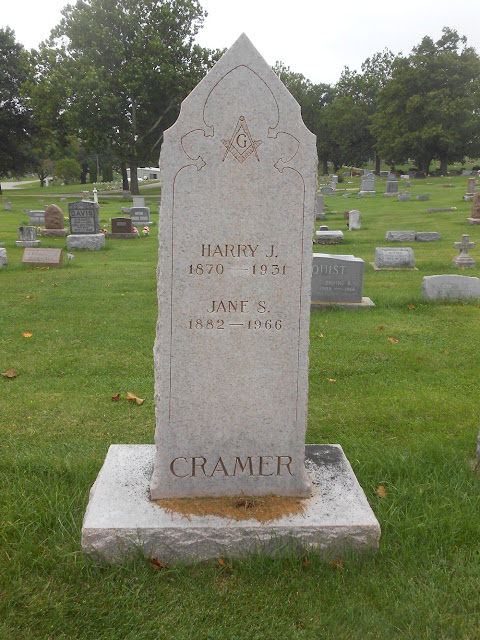