A tombstone for Charley Todd 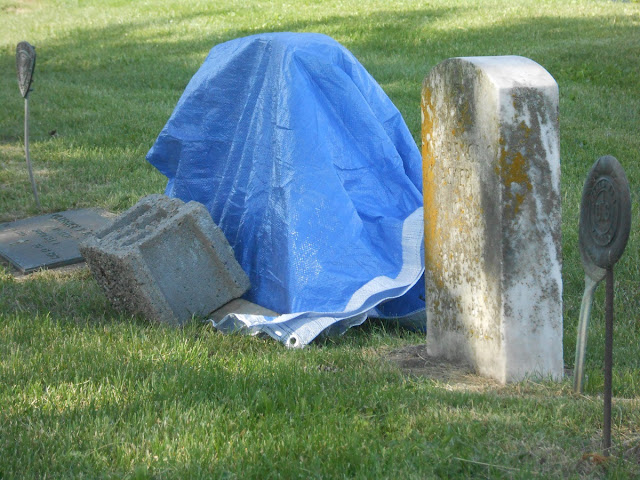 A blue tarp covers Charley Todd's tombstone --- brand new, installed nearly 80 years after he died --- this week in the Grand Army of the Republic plot in Chariton Cemetery.

The tarp will be removed and the stone unveiled during a ceremony at 1 p.m. Thursday, conducted by Legionnaires from both Chariton and Russell. In addition, a flag will be raised on the refurbished G.A.R. flag pole --- new roping has been installed and a solar lamp installed at its top.

Up on the square, Mary Stierwalt --- largely responsible for all of this --- will close Family Shoe Store for a couple of hours so that she can attend. Everyone else is welcome to attend, too.

This kind of started a year ago, when I wrote here about Charley after compiling a list of those buried in the G.A.R. plot and discovering that his grave was the only unmarked one there. Here's how that post, entitled "A flag for Charley Todd," read:

No one in Chariton knew much about Charley Todd, other than the facts that he seemed to be about 50, had served in France during World War I, worked hard, always was cheerful and was devoted to his faithful dog, Queenie.

According to a report on the front page of The Chariton Leader of October 26, 1937, he had arrived in town about five years earlier.

To make a living, Charley did odd jobs for business and professional men around the square. Eva Walls, who operated an apartment house on West Court Avenue, allowed Charley and Queenie to sleep in the basement. In return, he fired the furnace --- keeping residents warm during colder months.

Tragically, a fire broke out near that furnace very early on the morning of Saturday, October 23 --- and although the building was scarcely damaged, the smoke it generated proved fatal to both man and dog.

When firefighters finally were able to enter the basement, they found Charley on the floor, where he apparently had collapsed while trying to escape, and Queenie on the bed.

The Leader's columnist, identified only as "D.A.N.," noted on another page of the Oct. 26 edition that "Lawrence Stoko and I saw Charley Todd and Queenie late Friday night, only a few hours before they died from suffocation in a smoke-filled basement. After seeing the manner in which Todd beamed with pride when Stoko patted Queenie and termed her a fine dog, I can understand how neither would desert the other."

Someone knew that Charley had a brother, Ike, who lived at Vinton --- but he couldn't be located. So on Sunday afternoon, members of Carl L. Caviness Post No. 102, American Legion, took charge of the remains and Charley was buried with military honors in the G.A.R. plot at the Chariton Cemetery.

A week later, Ike Todd --- who said he had been traveling in South Dakota when authorities tried to contact him in Vinton a week earlier --- came to Chariton to learn the details of his brother's death and to look for a service revolver and valuable watch, which he thought Charlie should have had.

Sheriff Miles Mason informed him, however, that nothing like that had turned up; that Charley's only belongings had consisted of clothing, a few trinkets and a dollar watch. So Ike went home and that was that. But authorities did learn that Charley's full name was Charles Noble Todd.

Last year, I borrowed a flag from my neighbor, Don Garrett, who had just brought a pickup load to the cemetery to be placed in veteran flag holders, walked over and stuck it in the ground at the spot where Charley's headstone should have been.

My usual strategy after writing about something is to sit back and think about how nice it would be to do this or that, but actually do nothing.

Up on the square, however, Mary Stierwalt --- who had read the post --- decided to do something.

Several of us tried first  to verify Charley's service. If that could be done, he would have been entitled to a free government-issue stone matching those on nearby graves.

But Charles Todd is not an unusual name, World War I records are not easily accessible and Charley had neither family members nor friends --- not even family connections in Lucas County --- who might have provided some clues. In addition, he was a roamer and a rambler --- we had no way of determining where or when he might have enlisted to serve.

In the end, Mary adopted a different strategy. She worked with the Seddons of Chariton Monument to determine how much it would cost to create in white marble and set a tombstone for Charley that matched those of his neighbors in the G.A.R. plot.

She then invited contributions from Lucas Countyans present and past to help with the cost, and many did. The Seddons not only did the work, but contributed, too --- and I've not asked Mary how much she invested personally, but I'm sure that she did.

That tombstone, now firmly planted at the head of Charley's grave and covered by a blue tarp, is what will be unveiled on Thursday.

The G.A.R. plot, which consists of six double lots, was purchased on Sept. 15, 1893, by Daniel Iseminger Post No. 18, Grand Army of the Republic, to provide a burial place for comrades who had no other place to be interred.

After the last Civil War veteran had died, the plot was deeded to the city of Chariton on July 1, 1944, with the restriction that it be set aside for the burial of "any active or retired serviceman from any branch of service who can't afford a burial place elsewhere." Lucas County supervisors paid the perpetual maintenance surcharge.

Charley's grave is one of 20 there, including veterans of the Civil War, World War I, World War II and Vietnam.

What a proud moment. I plan to attend.

this is so interesting and such a wonderful event....wish we could be there....hopefully in late July when we visit Chariton I'll remember to stop by that area and see it....