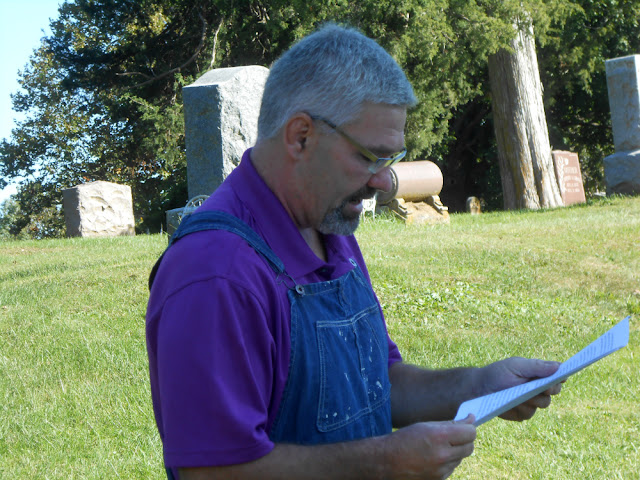 Here's the script used by Andy Fuhs Sunday as he portrayed Prof. John W. Perry during the Chariton Cemetery Heritage Tour presentation of "Secrets of the Stanton Vault." Perry was the first to be interred in the 30-crypt mausoleum, demolished in 1959. His final resting place now is identified by a metal funeral home marker embedded in concrete, as are those of 11 of the 16 people whose remains were reinterred in the vault's footprint. 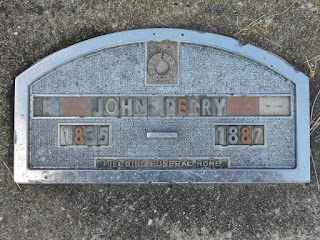 Ladies and gentlemen, it is indeed a pleasure to be with you this afternoon, almost precisely 118 years after I took up residence in the Stanton Vault --- with the dubious distinction of being its first occupant.

I am John Wallace Perry and you may call me “Professor,” if you like. I was among Lucas County’s most thoroughly educated men, having earned both bachelor’s and master’s degrees in the liberal arts, but had finally found my calling as a manufacturer of brooms when stomach cancer claimed me on Wednesday evening, Sept. 21, 1887, in my 51st year.

I had been ill for a long time, taking advantage of the best medical care that Chariton and Chicago had to offer, and when I finally passed, my wife, Henrietta, and two children thought it would be less harsh to procure a place for my remains here, rather than burying them, and so Dr. Stanton was contacted. The vault’s mortar was barely dry when the inner panel that sealed my tomb was put into place and the outer door of the crypt closed for the final time --- until 1959 when eternal rest was so rudely interrupted, the vault was demolished and I was unceremoniously reinterred here with others among my longtime neighbors.

I am a native of Indiana, born at Putnamville on Dec. 7, 1836, into a family of relative affluence. Because of that, I was able to enroll at Indiana Asbury University (now known as DePauw) at Greencastle during the late 1850s and earn two degrees before concluding my formal education during the spring of 1862. In 1859, I became a charter member of Xi Chapter, Sigma Delta Chi --- and so I was a fraternity man as well.

Upon receipt of my first diploma, I had two options --- to enter the Methodist ministry or to teach and I chose to be licensed to preach. But I chose the latter as a profession and while working toward my second degree taught and administered within four private and public Indiana school systems.

I was serving as superintendent of the public schools in Anderson during the spring of 1865 when I decided to move west to Iowa in search of new opportunity. I landed in Chariton during the fall of that year and opened a private academy, which I operated until 1869.

During the summer of 1869, in part because I wanted a more stable source of income, I secured the Republican nomination as candidate for Lucas County superintendent of schools, won the election handily and moved into my office in the courthouse during January of 1870.

I was an extraordinarily conscientious superintendent, visiting all of the county’s rural schools, conducting examinations and issuing teaching certificates to those who conducted them, arranging training courses and supervising the graduation process for our rural school system --- more than 100 one-room schools dotted our landscape during those years. I made sure to spend a full day every Saturday in my office so that I would be easily accessible to my constituents.

Despite that record, I was defeated in my bid for re-election during 1871 and forced to seek alternate employment. I had married Miss Henrietta Funk on the 6th of March 1870 at her parents’ home and now had a family to support.

I secured a position as route agent for the U.S. Railway Mail Service, working on the branch line from Chariton to St. Joe --- sorting the mail, tossing mail bags off at depots along the route and receiving and processing bags of outgoing mail picked up at the same time.

I continued in this position until the fall of 1876 when, again on the Republican ticket, I was elected clerk of Lucas County circuit and district courts. This came despite the scandalous accusation by Miss Nettie A Robertson --- widely covered in all of Lucas County’s newspapers --- that as superintendent of schools I had blocked her from a teaching position in the Chariton district because she attended First Baptist Church and I, First Methodist. There was no truth in this scurrilous accusation; that unfortunate woman’s motives were purely political (she was a Democrat)!

My bid for re-election, this time as clerk, again was unsuccessful in the fall of 1878 and although I left office with conditions in a far better state than they had been when I arrived, it was clear I was destined to be nothing more than a one-term office holder and so abandoned politics.

At that time, the equipment of a failed broom-making operation was for sale, I invested and finally found a profitable calling, producing and marketing a variety of household and business cleaning products as well as dealing in broom straw.

As it turned out I was a born salesman and traveled widely across the Midwest to market Perry Broom Factory products. Five years later, Chariton became a broom manufacturing center when the Curtis Broom Company opened on South Eighth Street.

My factory was located a block south of the square in a one-story frame building constructed by John Branner and used as Chariton’s first public school. That building was struck by lightning during July of 1885 and burned, but I rebuilt and re-equipped it.

The future held much promise when I became ill during 1886. Henrietta and I did our best to keep the factory running smoothly during months of surgery, treatment and recuperation and relapse.

And upon my death, Henrietta continued to operate the business ably until she suffered a debilitating stroke during the mid-1890s. The factory was sold and she then moved to St. Louis, where our two children were living.

Henrietta died in St. Louis on Oct. 11, 1898, at the age of 47. Her remains were returned to Chariton and interred in the crypt adjoining mine that had been reserved for her.

Here we remained for more than 60 years, until the decision was made to demolish the vault during 1959. By that time, no one in Chariton knew where our children were, even if they still were living, and so we were reburied with the others in the vault’s footprint, still together but not as we had envisioned it those many years earlier.
Posted by Frank D. Myers at 5:53 AM