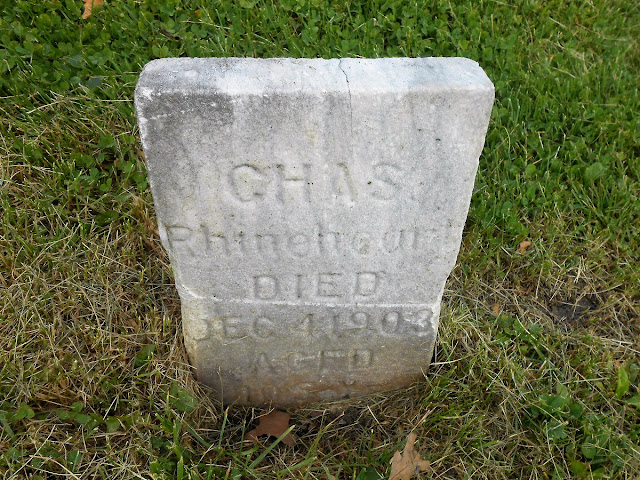 This tiny tombstone in the Chariton Cemetery, looking much larger here in a closeup than it really is, marks the grave of Charles Rhineheart (or Rhinehart) who would, were the inscription on it accurate, be one of the graveyard's oldest residents. According to the inscription, Charlies died Dec. 4, 1903, but his death actually occurred a month earlier, on Nov. 4. And the inscribed age --- 105 years, now below ground unless you dig a little --- appears to be an exaggeration.

When the 1900 census of Chariton was taken three years before his death, Charles was living with Romulus R. and Lillie Richmond and their eight children. According to that record, he was born during July of 1811 in North Carolina and was aged 88 when the census-taker called. So it seems most likely that he was "only" 92 when he died. There's little doubt, however, that he had been born into slavery.

Mr. Rhineheart's death, which occurred at the county home, was reported in The Chariton Democrat of Dec. 12, 1903, as follows:

"Chas. Rhinehart (colored), perhaps the oldest man in Lucas county, died on Wednesday evening, November 4, at the age of about a hundred years. Funeral services conducted by Rev. Press Irwin were held at the A.M.E. church on Friday morning at 10 o'clock and were attended by a large entourage of sorrowing friends."

Charles had entered the county home, also known at the time as the county hospital, when his health deteriorated to the point the Richmonds no longer were able to care for him. They had taken him in after the death of his son and caregiver, Newton, three years earlier. Charles's grave is located near the unmarked final resting place of his son.

Died, at his home in this city, Friday, Feb. 23, 1900, at 10 o'clock a.m., Newton Rhinehart, aged 21 years. Funeral services were held from the colored M.E. church Saturday afternoon at 2 o'clock, conducted by a colored minister from Osceola, and the remains interred in the Chariton cemetery. Newton had been sick for a long time with a complication of diseases, but notwithstanding the fact that he was scarcely able to be about, he worked faithfully at the depot hotel and supported his aged father, Charles Rhinehart. A short time ago he took the mumps, which, with other diseases, culminated in his death. His aged and almost helpless father is deserving of pity, for by the death of his son he has lost his only support. Mr. Richmond, a colored friend, has kindly offered him a home, which act of charity and love are certainly commendable.

Charles and his son and perhaps other family members seem to have arrived in Chariton about 1890, but I've just not been able to track them down before that. So for the time being, this is about all there is to report about the family.

Charles and Newton are buried on lots that appear to have no other occupants, but cemetery records show that this is not the case at all. They have a number of neighbors who rest in unmarked graves, including a murder victim --- but that's a story for another time.