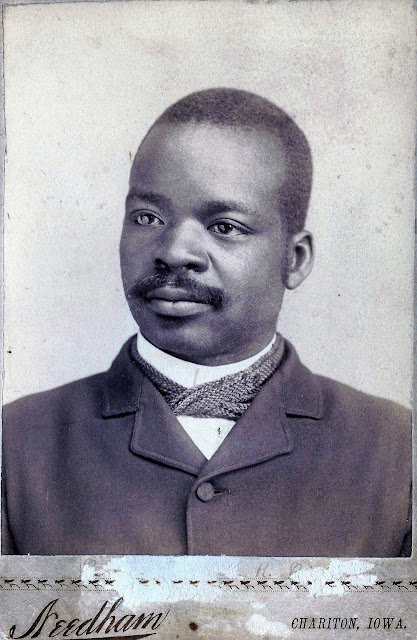 I've been intending for some time to write about Chariton's extraordinary Richmond family, but that's another of those projects that gets postponed again and again, partly because of its complexity.

But I was inspired a few weeks ago after locating online this photograph of Romulus R. Richmond, who brought his family from Wisconsin to Chariton in 1887, now in the collection of the Grant County (Wisconsin) Historical Society. So maybe I'm back on track.

As you can see, the photo was taken at the Needham studio in Chariton, probably during the 1890s. A copy was sent to relatives in the historic Pleasant Ridge settlement in Grant County, then eventually passed into custody of the historical society as it worked to preserve the history of this pioneer community founded by former slaves.

Romulus was born in slavery, perhaps during December of 1856 in Randolph County, Missouri, but at some point between 1870 and 1880 accompanied John and Queen Richmond --- most likely his uncle and aunt --- from Missouri to the Pleasant Ridge settlement in Wisconsin.

During 1880, he married there Lillie Green --- who had been carried in the arms of her fugitive-slave grandparents from Missouri to Wisconsin during 1863. They went on to have 10 children, four born at Pleasant Ridge, the remainder in Chariton.

Romulus came to Lucas County as a preacher, apparently called to serve a Baptist congregation (or congregations). This may have been Chariton's historic Ebenezer Baptist Church, but there was another congregation of black Baptists in the mining town of Cleveland, too.

By the mid-1890s, however, he was working for the Stanton family as sexton of the Chariton Cemetery.

I'll wait until later to add detail, but Romulus was a very talented man --- inventor, entrepreneur, iron molder (the profession he followed later in life), pioneer in introducing the movies to black audiences in the Midwest.

Unfortunately, he abandoned his family in Chariton prior to 1910 --- and that makes Lillie Richmond the hero here. She worked as a cook and at other occupations to support the children who remained at home after Romulus's departure. These younger children included Maceo, a stellar athlete who was among the first black U.S. Army officer candidates to train at Fort Des Moines during 1917; and Booker T., an outstanding attorney.

Romulus, according to some reports, died during 1924, perhaps in Lincoln, Nebraska, where he was working as a machinist when both 1910 and 1920 federal census-takers called.

I'm out of time this morning, so that's all I have to share about the Richmonds at present. But stay tuned.

Super interesting! Thank you for all the research and organization it takes to write authentic history.

I have the 1923 Chariton High School Yearbooks and was always intrigued by the one Black graduate that year. Booker T. Richmond was not only a stellar football player, but an outstanding debater and poet. He worked his way through college and Law School at the University of Iowa and when he took the bar exam, was first in his class.
An amazing family with an amazing history!