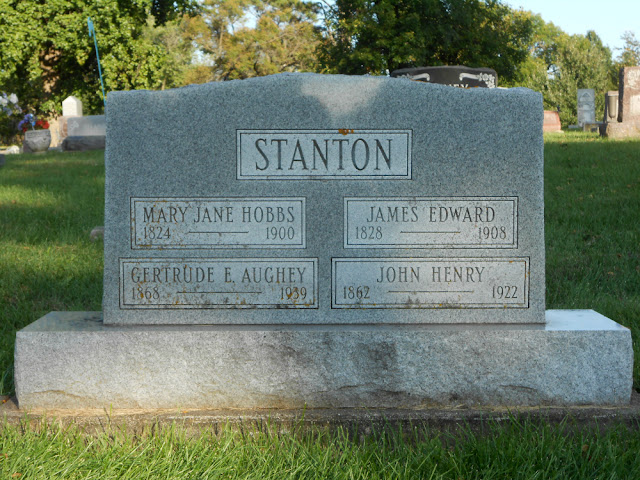 Here's the text of Dr. James Eddington Stanton's script, used during Sunday afternoon's Chariton Cemetery Heritage Tour, "Secrets of the Stanton Vault." Stanton , who built the vault during 1887, discussed his own background, cemetery history and the history of the vault, and introduced four other occupants --- John W. Perry, Louise Mallory Thayer (via her mother, Jessie), Andrew Swan and Minnie Day Kirk.

Stanton's remains were reburied with those of several other family members and others, 16 in all, in the vault's footprint when it was demolished during 1959. Stanton heirs provided this tombstone, mistakenly inscribed "James Edward." Stanton owned and operated the cemetery until his death during 1908. Mary Jane Hobbs was his wife; John H. Stanton, his son, who inherited the cemetery; and Gertrude E. Aughey, his daughter-in-law, who sold the cemetery to the city of Chariton in 1924. 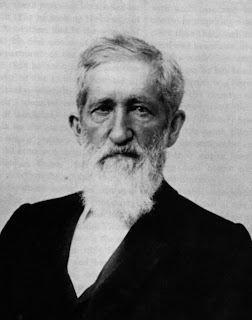 Welcome to my cemetery, ladies and gentleman. It would be more of a pleasure had the mausoleum I built here in 1887 not been knocked down in 1959 and my family and friends unceremoniously buried in the hole left behind. But that was more than 50 years ago and we’ve adjusted.

I’m going to introduce to you today several of those who share this space with me --- and they will tell you their stories. But first, I want to provide some background.

I say that this is “my” cemetery because I was among the original stockholders of the Chariton Cemetery Co. in 1864 and by 1890, owned this city of the dead outright. It remained in my family until 1924 when my daughter-in-law, Gertrude, was forced to sell it to the city because she was not tending to its business as she should have been. While I was annoyed about that, there was little I could do from my resting place inside the vault.

If memory serves, I was visited here during a previous cemetery tour and my life closely examined then, so my wish today is to talk about the cemetery instead, summarizing my life in a few sentences.

I am a native of Ohio, born during May of 1828 in Belmont County, and of old Quaker stock.

I received my medical education at the medical college in Keokuk and returned to Belmont County to begin my practice. There I married in November of 1850 the estimable Miss Mary Jane Hobbs.

We came to Chariton with our young family in 1862 and I became one of Lucas County’s pioneer physicians, traveling most its byways on horseback, then by buggy, attending to the medical needs of my neighbors.

When I arrived, there were two cemeteries serving Chariton. One, quite small, was on a hilltop down the ridge southwest of the square where Columbus School now stands --- but its location was impossible. The steep hillside, unsuitable for burying, descended into the gully where Court Avenue now runs and a residential neighborhood began to grow up around it elsewhere, hemming it in.

The other cemetery was southwest of town along the Mormon Trail --- you call it Douglass Pioneer Cemetery now. Buck Townsend, at whose cabin the town of Chariton was organized in 1849, told us that the first graves there were left behind by Mormon pioneers stranded at what then was known as Chariton Point during the winter of 1846-47. As the years passed, others claimed space there and buried their dead, often bringing them from a considerable distance.

But this burying ground never was platted, grew helter-skelter and no one was sure who owned it, although it generally was recognized as public ground.

And so during June of 1864, 19 prominent men of Chariton got together and incorporated the Chariton Cemetery Company. I was among those who purchased some of the original 60 shares of stock, priced at $20 each. The proceeds, $1,200, were used to buy the hills and valleys where the cemetery now is located and to lay out its earliest section --- the long narrow strip of land divided by a driveway where we are gathered now.

All lots in the original plat were commodious, 20 feet square, although half lots were sold. Some distance to the southwest, we allowed space, sometimes called “south cemetery,” where paupers could be buried. You call it Potter’s Field today.

The remains of all those buried on the Columbus School hill then were removed here during the winter that followed --- and several families also removed their loved ones from Douglass Cemetery and reburied them here as well.

As the years passed, my interest in the cemetery grew as that of other stockholders waned --- and by 1890, the Chariton Cemetery Co. was a family business. By that time, my sons John H. and Theodore had joined the family medical practice and I was able to devote my full attention to managing, beautifying and otherwise improving the graveyard.

During 1887, I decided to add a mausoleum to cemetery amenities and had it constructed here. It was intended to house the remains of my own family, to serve as a receiving vault for the cemetery and also to be available to the general public. Sale of individual crypts allowed me to recoup my investment in the structure.

I also extended the cemetery, platting areas on high ground to the south and southeast, working to create a park-like setting, then the latest trend in cemetery design.

The Stanton Vault, as it was called, was of cut stone, half buried in part as ground rose to the east. I am standing where its entrance gates once were. The interior was constructed of brick and contained 30 crypts arranged in two rows of 15 each, stacked three high, on either side of a broad walkway. These cement-lined crypts were fronted by cast iron doors in which marble panels suitable for memorial inscriptions were embedded. Once permanently occupied, the burial chamber behind each door was sealed with a concrete panel held firm by mortar.

As the number of permanent occupants grew, we also entertained a number of temporary guests. The original occupants of both the Copeland and Lockwood mausoleums, for example, rested here during 1910 while their own vaults were under construction.

Ownership of the cemetery then passed to my son, John H. Stanton --- but his principal interests were elsewhere, the cemetery was left in the hands of caretakers and it became overgrown and was poorly cared for.

Following John’s unexpected death during 1922, he joined me in the vault and ownership of the cemetery passed to his widow, Gertrude. But she could not cope with its management and the Chariton City Council, faced with increasingly vocal complaints, finally forced her to sell the cemetery to the city for $10,000 in 1924.

Much of what you see here now came about after the city assumed ownership --- extensive landscaping, additional burial plots, the English Cottage to the southeast, the Baby Heart burying ground beside it, the stone entrance gates, and more. It was the city’s dedication to this place that helped to earn it designation during 2010 as a National Historic District, listed as such on the National Register of Historic Places.

My daughter-in-law, Gertrude, died in Chicago during 1940 and her ashes were the last remains interred in the vault.

By 1959, this once proud structure was seriously deteriorated, overgrown by shrubs, its entrance blocked with plywood, an object of morbid curiosity and, potentially, of vandalism. As a result, the city ordered its demolition.

Families, when they could be located, were offered the opportunity to remove their loved ones and bury them elsewhere. Several did. Stanton descendants, however, decided to leave family members here and the relatives of six others could not be found. So when all was said and done, 16 of us remained. Our remains were placed in new containers, then buried in the footprint of the demolished vault, where we remain.
Posted by Frank D. Myers at 5:49 AM