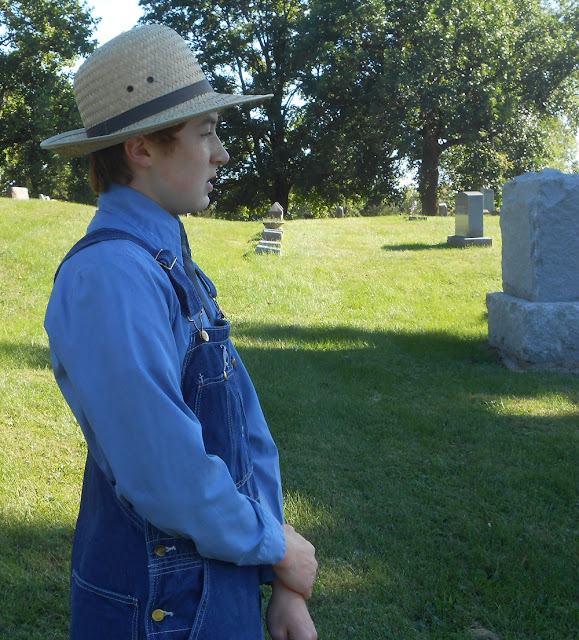 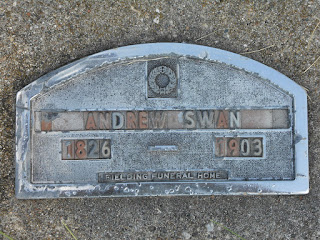 Andrew Swan, who went down with the ship in a sense when the Stanton Vault was demolished in 1959, was the only representative of Lucas County's farming community re-interred in its footprint. An immigrant from Sweden, his prosperous family relocated to Nebraska and California in the years following his death, leaving Andrew's remains behind.

Lewis and Maria (Virgin) Bonnet, also interred in the vault, were farmers, too, but members of their family still lived in and near Chariton in the mid-1950s and evacuated their remains to a family lot in the southeast part of the cemetery.

Here's the script that Trae Hall used in his portrayal of Andrew during last Sunday's Chariton Cemetery Heritage Tour presentation of "Secrets of the Stanton Vault."

What? You look puzzled. No one here understands Swedish?

I just said, “Hello! My name is Andrew Swan.”

Back when I was alive, there were hundreds of Swedish-speaking people in Lucas County --- more than those who spoke any language other than English. We were the county’s largest ethnic group; even had two churches of our own where services were conducted in the Swedish language --- the Swedish Lutheran Church on North 8th Street (now First Lutheran) and the Swedish Mission Covenant Church on West Braden Avenue.

My family and I were members of the Mission Covenant church.

I and my wife, Maria, both were born in Jonkopings Lan. “Lan” means county in Swedish, and our home was in the interior of Sweden’s southern tip, about midway between Stockholm and Copenhagen, Denmark.

I was born in 1826 and Maria and I were married there on June 23, 1853. Our two eldest children, sons Swan and Nels, were born there, too. I was known as Andreas Swanson in Sweden, and had we remained there, our older son would have been known as Swan Andreason --- Andreas’ son.

We were farming people, however, and farm land was scarce and expensive in Jonkopings Lan. So in 1861 Maria and I brought our two children to America.

By 1876, many Swedish people --- including friends and extended family members --- had settled in Lucas County, Iowa, and they wrote, encouraging us to join them. And so we did during the spring of that year.

Our new farm was northwest of Chariton, two miles south of Oakley in Whitebreast Township --- and we prospered there.

As the years passed, our older children married and moved farther west. Christina, Swan and Sophia and their families settled near Wausau, Nebraska. Nels, a Mission Covenant pastor, joined them there, married and then moved on to California. By 1900, only Charles and Anna remained at home.

Death, when it came on Nov. 21, 1903, was a considerable surprise. Although I was 77, I had not been ill and was able to farm beside my bachelor son, Charles. But on that day my heart gave out and before sunset I was gone.

This was a shock to the family and there was a good deal of debate among the children about where I should be buried. Finally, they inquired of Dr. Stanton about a crypt in the Stanton Vault, and that was where my remains were placed after funeral services at the Mission Covenant Church. Had life worked as planned, Maria was to join me in an adjoining vault upon her death.

Life rarely works as planned, however, and after the 1907 harvest, our son Charles decided that he no longer wanted to farm. And so the farm and the livestock were sold during February of 1908 and Maria, Charles and Anna moved first to Chicago, then to Indianapolis, and finally to San Diego, California.

They had only been settled in San Diego for a short time when Maria unexpectedly suffered a heart attack and died during late November, 1913. No thought was given to returning her remains to Chariton. Instead, her body was placed in the mausoleum at Inglewood Park Cemetery.

Many years later, when the Stanton Vault began to deteriorate and the decision was made to demolish it, none of my family could be located and so no one was offered the option of removing my remains and burying them elsewhere.

And so, when the remains of those still in the vault when it was demolished were reburied, mine were among them.
Posted by Frank D. Myers at 6:35 AM