Kirk Jones and the awful costs of war 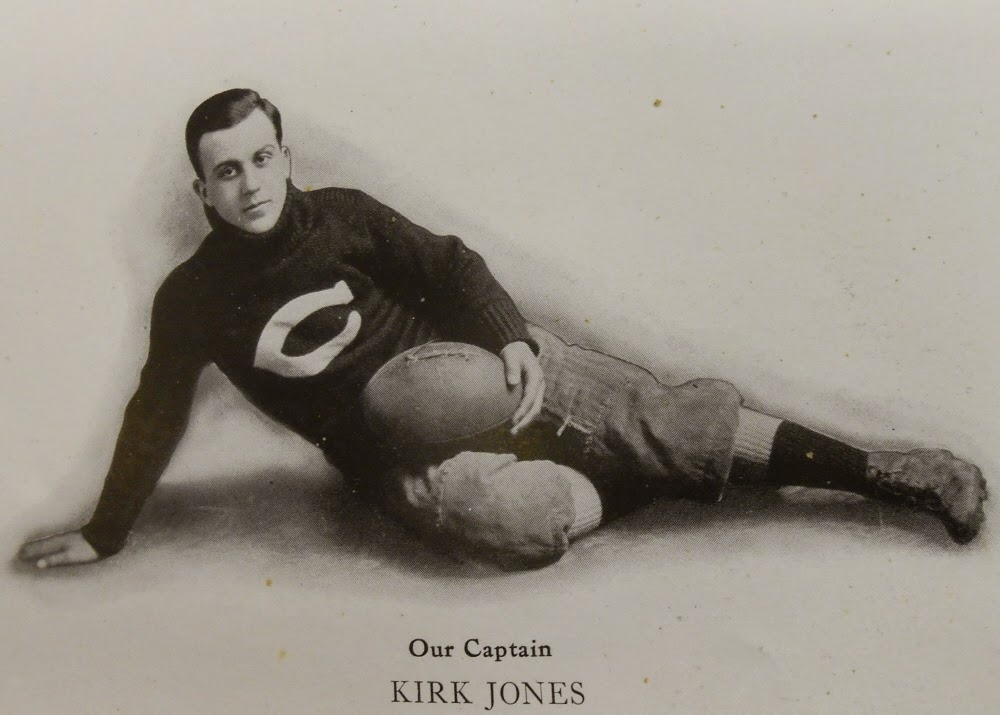 Kirk Jones, captain and coach of the 1913 regional football championship Chargers, was mentioned briefly yesterday in a post about the team. But of course there is more to his story.

The photo here is taken from the 1914 Chariton High School yearbook, the earliest we have in the museum collection. Kirk graduated with the class of 1914 and here's the copy block that appears under the photo:

"Captain Kirk Jones wound up his High School athletic career in a blaze of glory Thanksgiving day. It was a fitting close to the four years of service to his school in which he attained and merited popularity that is accorded few athletes.

"Jones' record as an athlete is second to no other High School student of Chariton as far as is known.

"He has been a mainstay on the football team, for three years serving as captain. During the seasons of nineteen-twelve and thirteen, he proved conclusively that an athlete could be efficient and yet keep strictly within the rules. His service will be missed next year, but his record will be an inspiration to future high school athletes." 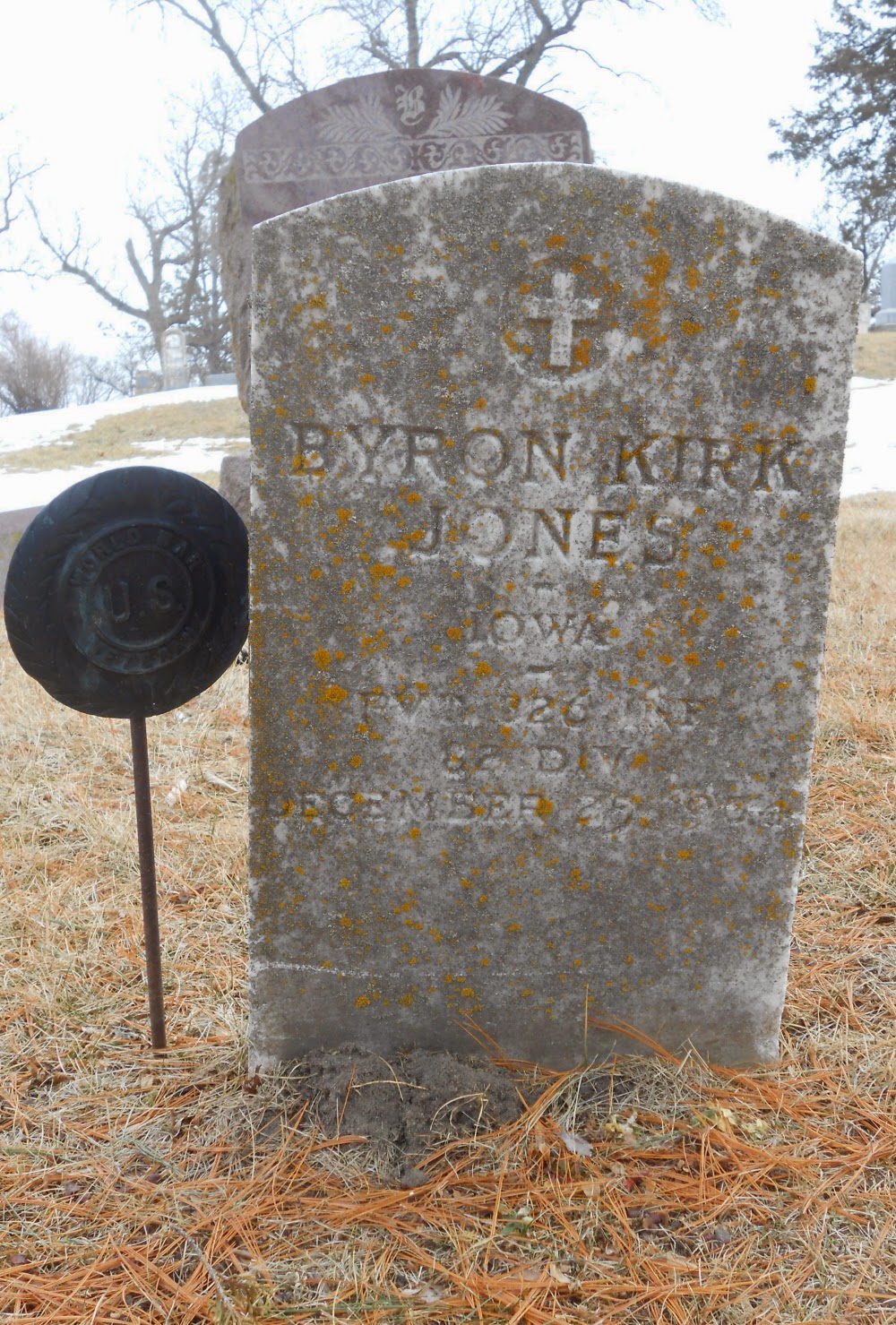 Kirk, whose given name was Byron Kirk, was the only child of Edward S. and Ida May (Branham) Jones, born in Chariton Aug. 5, 1894. His father was a pharmacist who worked on the square for more than 60 years as a drug store employee, co-owner and owner. The small family lived on South Grand Street.

After graduation, Kirk apparently went to work in the family drug store in Chariton and at some point during the next couple of years began courting Genevieve Argo, who was a year older and had graduated from Chariton High School with the class of 1911. Genevieve was a talented musician, who attended the Drake University Conservatory of Music for a year before enrolling at Monmouth College, Monmouth, Illinois. While a student there, she toured for two seasons as a soloist with the Monmouth College Glee Club.

As war clouds gathered in Europe and U.S. involvement became inevitable, Genevieve and Kirk were married secretly in Galesburg, Illinois, on Sept. 2, 1917. Later accounts maintain that neither family nor friends were told and that the impending war and his likely service were a factor in the decision to marry.

Kirk had registered for the draft in Lucas County and on Jan 8, 1918, enlisted in the 339th Field Artillery, headquartered at Camp Dodge, and soon thereafter was called to active duty. He subsequently was transferred to Company C, 326th Infantry, and moved to New York for further training and to await deployment to France. He last visited in Chariton during March.

Although the marriage still had not yet been acknowledged publicly, Genevieve gave birth prematurely to the couple's daughter, named Betty Jane, in Chariton on April 17, 1918. The infant died two days later, on April 19. There was no possibility that Kirk could return home when this occurred. He and his unit left New York for France 10 days later.

Genevieve did not recover from complications related to childbirth and by early May she was desperately ill. It was then that her parents, Mr. and Mrs. William H. Argo, publicly announced the marriage in both The Chariton Leader and the Herald-Patriot. Genevieve died of pneumonia on May 19, 1918, shortly after Kirk had reached France.

So far as I know, there's no way to make sense of this sequence of events nearly 100 years later.

Once in France, Kirk served with his unit during the September Battle of St. Mihiel and in the decisive Meuse-Argonne Offensive. Although not wounded, he was seriously gassed and emerged with what then was called shell-shock, the equivalent of today's PTSD. As a result, he was in and out of military hospitals during the final months of his time in service. The gas seriously compromised his respiratory system and eventually would kill him.

Kirk returned to Chariton during February of 1919 and a place in the family drug store was made for him. During late June of 1919, he married as his second wife Iva Belle McKinney, of Avoca, who had operated a millinery store in Chariton prior to the war.

They left Chariton not long after their marriage, living in Des Moines, Burlington, then Chariton again, and finally Des Moines. Kirk seems to have worked most of the time in drug stores, but always was in need of medical attention. During periods of severe illness, he went to the St. Louis veterans hospital for treatment.

By late fall 1934, his illness had reached the critical point and the couple had broken up housekeeping. Iva had taken their sons to Avoca to live with her parents, traveling between there and Chariton, where Kirk was being cared for in his parents' home. His was reported to be critically ill during early December.

During mid-month --- apparently --- the decision was made to take him to the veterans hospital in St. Louis for treatment, most likely by car with his father at the wheel. They made it only as far as Macon, Missouri, however, when the situation became dire. He was admitted to the Macon hospital on Dec. 17 and died there on Christmas Day, age 40, with his father at his side.

The remains were returned to Chariton for funeral services and burial on the Branham family lot, a considerable distance from Genevieve and their infant daughter, Betty Jane.

Kirk's parents continued to live in Chariton, where Edward was able to mark 60 years as a pharmacist, until both died during 1958 and were buried by Kirk's side.

Iva lived a majority of her life in Avoca, then moved to California to live with her sons and died there during 1973, age 83, never having remarried. Son Byron Kirk Jr., known as Ted and as Kirk, served as a U.S. Army sergeant and photographer during World War II, then went to work as a photographer for Warner Brothers Studio. He died during 1984 in Granada Hills, California, age 63. Robert Edward, who also served during World War II, married in Iowa Lavira Kohlsheen and their son, Larry, was born in 1946. The couple later divorced.

Robert worked as a ranger at Shasta National Forest in California and died at Redding during 1976, age 52. Iva and her two sons all are buried at Lawncrest Memorial Park in Redding.

I read ALL (well almost all) of your writings and thoroughly enjoy hearing about folks lives from my hometown!! Thank you your research and my pleasure moments in reading them.