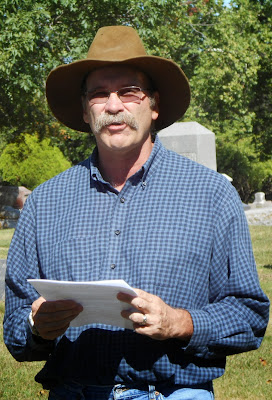 The first time I rolled into Chariton was during the late fall of 1853 --- and I was walking beside a prairie schooner, not riding --- the square was mostly covered by prairie grass and there was just a fringe of timber to see off south along the river. The new log courthouse stood on the west side and we passed between log cabin stores of the Hills and the Wescotts on the northwest corner headed out of town.

The last time I rolled into town --- my bones in a crate on a flatbed rail car --- it was April of 1936 and Chariton was a busy and built-up town, not that much different from what you see today.

I am Rene Julien and my name is an old and proud one. My great-grandfather was Rene St. Julien, a French Huguenot refugee to England who served in William of Orange’s army at the Battle of Boyne and married Mary Bullock in Bermuda before arriving in America during 1692. My father was Rene Julien, too, a solider of the American Revolution.

I was born during 1783 in North Carolina, but moved to Lawrence County, Indiana, as a young man, where I married twice and fathered 10 children.

By 1853, however, I was 70 and considered to be a very old man. My wives were dead and my children were scattering across the West. And so on the 15th day of September in that year, I walked away from my Indiana home and with two of my sons and their families, and others, headed for Iowa.

Our party consisted of six prairie schooners, two buggies and 20 people, young and old. I was by far the oldest.

My son Jacob and his family owned one of the wagons and my son Isaac, another. The Juliens had two teams of horses, a strong yoke of oxen, about 40 cattle --- and the family dog.

We arrived in the eastern part of Lucas County on the 8th of October and the next day Isaac and his family traveled on to Chariton while I accompanied Jacob and his family up into Marion County where we spent a few days with my daughter, Leannah, who had married Thompson Woody and relocated to Iowa three years before.

We soon headed for Chariton, however, and settled on claims north and west of town, open prairie fringed by woodland along White Breast Creek and its tributaries.

I lived well and for the most part happy and healthy in cabins here until my 78th year, when I died on March 16, 1861, of the infirmities associated with age, surrounded by family and friends.

My not-quite-final resting place was a pioneer graveyard in woodlands near the crest of White Breast Hill, not far north of what now is Highway 34 midway between Chariton and Lucas. A year later, my granddaughter, Mary Ellen Julien, daughter of Isaac and Lucretia, died in her third year and was buried beside me. Her parents bought this tombstone to mark both of our graves.

As years passed, the first rail line west through this part of the country was built in 1868 just north of our gravesite, known by most by now as the Watson graveyard. But our rest was not disturbed until the spring of 1936, when the decision was made to rebuild the railroad grade to better accommodate double tracks and make the ascent of the White Breast hill easier.

The plan called for destruction of the Watson graveyard, in 2013 mostly under the new grade, in the interests of progress. Mary Ellen and I had the only tombstone that could be found there, but 12 other graves marked by fieldstones or otherwise evident were dug up by workers who placed their contents in crates and loaded them onto a flatcar --- along with the Julien tombstone --- for shipment to Beardsley Funeral Home in Chariton.

A site in the far northwest corner of the Chariton Cemetery was selected for reburial of the dozen who could not be identified and the railroad paid for small markers inscribed “unknown” that remain there today.

Because my son Isaac Julien’s family had a nearby lot in the cemetery and our bodies had been identified, our remains were reburied here on it and the old tombstone put into place again to mark their location. Other family graves are just to the south.

And so, at last, the Julien family was reunited.
Posted by Frank D. Myers at 5:42 AM