Here is Carl L. Caviness's story as told by Patrick Dittmer on Sunday during the Tenth Annual Chariton Cemetery Heritage Tour, sponsored by the Chariton Historic Preservation Commission. Other stories told Sunday were those ofMaggie Corbett, Marko "Chicago Mike" Vicicic and Rene Julien. The script was written by Kylie Dittmer for her brother, Patrick. He is a third-generation nephew of Carl; and she, a third-generation niece. 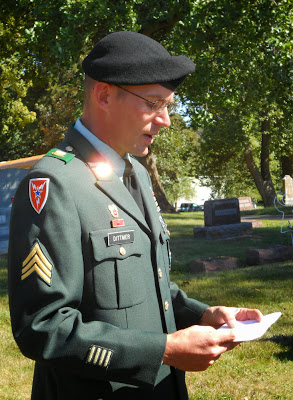 On May 20, 1918, while on patrol, Carl Leo Caviness was killed by enemy fire in France. His was one of more than 116,000 deaths suffered by the American forces in World War I, but he was the first from Lucas County to make the ultimate sacrifice for his country.

Carl was born in Lucas County on May 6, 1896, to David and Minerva (Ballard) Caviness. He was the youngest of ten children. His father was a Civil War veteran and his mother was a niece of the first settler of Lucas County, John Ballard.

When Carl was still young, he went to live with his sister and brother-in-law, Maude and John Frazier of rural Lucas County, due to the divorce of his parents, David and Minerva. He completed school through the ninth grade and after he left school he enlisted in the Iowa National Guard. During the next four years he served most of his time on the United States/Mexico border. 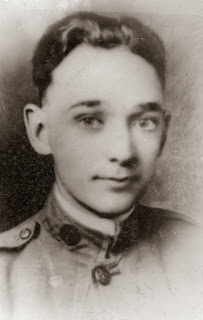 In September 1917, Carl returned to Iowa and married Charles City native Ruth Cress before being shipped out to France to fight in World War I. Carl arrived in France in December 1917. He was 21 years old. His first assignment in France was as a battalion runner. As a battalion runner, Carl was in charge of running messages from headquarters to the soldiers in the trenches. After a short time doing this duty, Carl asked for a transfer to battalion scout. As a battalion scout, Carl was sent on patrols of the enemy lines. It was a highly dangerous job and it was while doing this job that Carl was killed.

Carl’s death was explained by Corporal O.D. Ewing, who was with Carl when he died. “We were sent out to investigate a section of the German first line trench. It was a very dangerous bit of work and the fact that Carl was chosen is evidence that he was one of the best men in the scout section. We left our trenches about 3 p.m. in two groups of four men. Carl was in the group on the left, I was on the right. My group worked up with about 35 yards of the German trench before they discovered us. We had a little brush with them but managed to get back with our information without any casualities.

“We had heard rifle firing to the left of us, but we didn’t think much of it. We retreated through heavy woods, trenches, barbed wire and over a hill, laughing as we had gotten to the German lines. It was then that we were approached by another soldier who was out of breath. He informed us that one of our men was still out there and had been hit. We did not stop to ask questions, we went back up over the hill to where two our men were guarding where he had fallen.

“We went crawling through a shallow trench of the Germans until were close enough to get to him. Then while part of us fired to keep the Germans down, others left the trench and brought his body back to the shelter. We then retreated back over the hill with Carl’s body under enemy fire.

“It was then that we learned (the circumstances of) of Carl’s death from the soldiers who had been with him. Carl and an officer had made their way up over the hill and into the German’s trenches. They started crawling further into the dugout when they were fired upon. Carl was hit right away and was killed instantly. The officer then stayed and guarded the body while another soldier went for help.”

After Carl’s body was brought back from the enemy’s trenches, the soldiers buried him on a hill in France with a full military burial, including a firing squad salute.

In 1921, at the request of Carl’s family, his body was disinterred and brought back to Lucas County, where it was laid to rest in another full military burial including a procession of over 100 service men and the Legion Band. That day the flags soared and proclaimed, “the pride of America is in its defenders and their work will always be rewarded.”

My name is Staff Sgt. Patrick Dittmer. I am the three times great nephew of Carl Caviness and I am a veteran of the United States Army. I graduated from Chariton High School in 1997 and went directly into the Army. While on active duty I served in Germany, Texas, Kansas, Georgia and South Carolina. I have also served three overseas combat tours, the first in Albania, then Iraq and last Afghanistan. I left the Army in 2011, but currently serve as a communication specialist in the U.S. Army Reserves.

I was honored to be asked to talk about Carl Caviness and get the chance to tell his story. To be able to do so is a rare opportunity to pay tribute not only to a great soldier but also to a member of my family. One of the most important things about being in the military and being a veteran is to remember the legacy of the soldiers who have fought for our country. Telling Carl’s story is a chance for me to remind people of his legacy and that of the soldiers who have gone before us.
Posted by Frank D. Myers at 6:16 AM

Ran across your blog while pursuing images. As a history fanatic I appreciate your efforts. In my younger years I would often stop at local libraries and read up on some local history. You posts remind me of that. Take care.