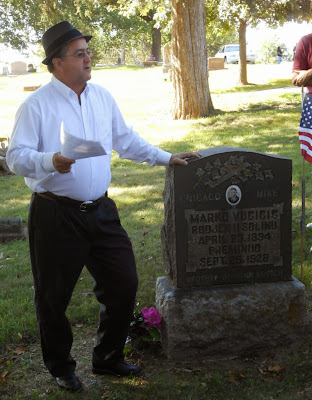 They used to say, back in coal mining’s glory days, that if Chicago Mike saw a bird on a branch, he’d bet on the direction it would fly. That was me, Marko Vucicic, but known in Tipperary, Olmitz and Lucas County’s other mining camps in the teens and 1920s as Chicago Mike.

I was a gambling man, a bootlegger, a lover of fast cars and fancy clothes --- and I died too young, at age 34 --- driving too fast, I slammed into a street car in Des Moines. Buried first in Chicago, it was my brother, John, who brought me home to Chariton, thousands of miles from where we were born, so we could rest together.

I was born in 1894 in Croatia near a town on the Adriatic Sea called Solin, an ancient place that was the capital of Roman Dalmatia and the birthplace of the emperor, Diocletian. My family owned vineyards there and made and sold wine to earn a living.

But the work was hard, money was scarce and there were too many of us trying to live off the same small patches of land. So after hearing that in America all you had to do was get a scoop and shovel the money in, my cousin, Martin, and I made our way to Chicago during 1912.

We worked there, moved to Colorado to work in the mines, traveled with a circus as wrestlers, landed in Iowa at the legendary Buxton mines and, in the fall of 1914, when the shaft was sunk at Tipperary out in Pleasant Township, I came there to work.

I wasn’t much of a miner, but I was a heck of a wrestler --- and even better at gambling. Luck always seemed to be with me, until it ran out; I had the skill. And I knew how to whip up batches of home-brew, too.

So gambling was how I made my living with bootlegging to tide me over between slow times at the mines. Come payday, I’d throw out a tarp and start a game, craps or whatever anyone wanted to play. I gambled at Tipperary, at Olmitz, up in Williamson, over at Melcher and on the levee in Chariton. I almost always won.

When the action slowed around here, I went to Chicago and gambled there, too. That’s how I got the name “Chicago Mike.”

All of this was against the law, so the sheriff was always on my tail --- but I moved too fast for him most of the time. I drove fast and fancy cars; dressed fancy, too.

You’d have though those other miners and their families would have disliked me, but they didn’t. In fact I developed a Robin Hood reputation, always kind and open-handed to those who had less. I only ran into real trouble once, when a gang held me up south of Newton one night in 1925, shot the windshield out of my car and robbed me.

By 1921, I’d saved enough money to send for my baby brother, John, still in Croatia; drove up to Chicago to pick him up, then brought him home to Tipperary.

In 1923, I met the beautiful Leona Duffy at a dance in Olmitz, and we married soon after and moved into a shack in Tipperary. But I was not a good husband; I roamed too much and wouldn’t settle down. In 1928, she divorced me.

We drove into Des Moines together on Sept. 26 of that year --- next week will be the 85th anniversary of my death, you know --- to sort out some of our business, and I was driving too fast on Dean Avenue when something distracted me and the car slammed into a streetcar. I was killed, but Leona recovered.

Brother John and my cousin, Martin, had my body taken to Chicago for a funeral Mass and burial --- and the tombstone you see here, with my picture on it, stood there for many years.

John finally settled down in Chariton, had a family, farmed a little and operated a bar called John’s Club. He lived long, and thinking of those last things in his later years, decided that he wanted to be buried here and that he wanted me with him. So he hired Mosher Funeral Home to negotiate with the Archdiocese of Chicago and oversee the move and reburial in Chariton.

After John died in Arizona at age 100 during 2002, his remains were brought here and buried beside me.

It wouldn’t be fair to end this without saying “thanks” to Rose Marie Briggs, Her meticulous research and writing skills resulted in two books, one about Tipperary and the other about Olmitz. You can read much more of my story in “Tipperary: Gone But Not Forgotten.”
Posted by Frank D. Myers at 5:52 AM

I am enjoying these fascinating true stories. Thanks for sharing.