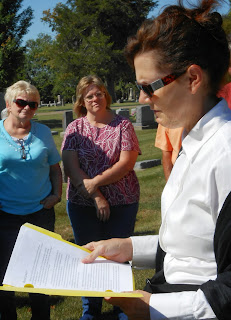 This is Maggie Corbett's story as told by Ruth Comer on Sunday during the Tenth Annual Chariton Cemetery Heritage Tour, sponsored by the Chariton Historic Preservation Commission. Other stories told Sunday and waiting to be retold this week are those of Marko "Chicago Mike" Vucicic, Rene Julien and Carl L. Caviness.

You’d never think now that such things could happen, but on a moonless night just before Halloween 126 years ago, my rest here was disturbed in a most horrible way --- by grave robbers. And justice never was done.

My name is Maggie Corbett and I was 37 then, a victim two days before of typhoid fever. Jesse, my husband, and our children buried me in this spot the next day, a Saturday.

We were poor. Jesse peddled pumps for a living and few in Chariton would have known that I had lived or died if my grave had not been desecrated.

Late on the Sunday night after my burial, men approached my fresh grave and dug out the coffin, removed the body, refilled the grave and then dragged my remains through the grass down that hill there and through the osage orange hedge surrounding the cemetery. Scraps of my clothing and strands of my hair caught in the hedge.

They threw my body into a wagon, drove to the foot of hill and turned right, following the old meandering route to the bridge across the river. There, they broke my body, trussed it, jammed it face-up into a crate 16 by 16 by 22 inches and nailed the box shut.

A short time later, a rented buggy driven by a young medical student from Chariton, John Gillespie, then studying in Des Moines, pulled up, money exchanged hands and the crate was loaded. Gillespie drove to the C.B.&Q. depot and checked the box as baggage for shipment to Des Moines, then boarded the early-morning train.

Baggageman McBeath first noticed the box during that run because of the odor coming from it. After calling on the conductor and brakeman for assistance, he pried part of the lid off and, horrified, saw my face, then sealed the box again.

The conductor took the numbered ticket from the box through the train, asking passengers for its duplicate. No one claimed it --- although Gillespie was aboard.

After arrival in Des Moines, a Polk County coroner took charge of my body and telegraph messages were sent to Marshal Cole in Chariton, asking for his assistance.

The marshal rode out to the cemetery to check recent burials and discovered that my grave had been disturbed, then followed threads of evidence to discover that young Gillespie had been a passenger on that early morning train to Des Moines, that he had rented a buggy on Sunday from a Chariton livery stable and that he had indeed checked a box at the depot in the evening for shipment to Des Moines.

Armed with a warrant for Gillespie’s arrest, Marshall Cole boarded a train for Des Moines Monday evening and identified my body. Des Moines police had in the meantime tracked Gillespie to the east-side office of a Dr. Lease, with whom he was studying. Marshall Cole arrested him there, but Gillespie protested his innocence, claiming that he had been in Chariton on Sunday to visit his sick mother. He was jailed overnight in Des Moines, however.

Both Gillespie and my remains were returned to Chariton on the noon train Tuesday.

Because there was great outrage against Gillespie here, the train was stopped at Indianola Junction, three miles west of town, and he was removed and brought to the county jail by buggy.

After arrival at the depot, my body was taken to the Bradrick & Son funeral parlors, identified by Jesse, and then reburied.

On Thursday, a Lucas County grand jury indicted young Gillespie for grave robbing --- and bond was set at $2,000.

But justice was not to be done --- and I attribute this to the fact we were poor and of no consequence while young Gillespie and his family moved in more elevated circles.

His parents, James and Clarissa, operated a general merchandise store on the square and were among the town’s commercial elite. John was looked upon as a young man of great promise.

So friends immediately posted bond, boasting that even had it been twenty times $2,000 the amount would have been raised. Chariton’s top attorneys, Theodore M. Stuart and the firm of Mitchell and Penick, were retained to represent him.

The case came to trial in the old brick courthouse during January of 1888, but by now Gillespie changed his story.

He had, he said, received an anonymous letter offering him my body for medical study and had traveled down from Des Moines to fetch it, rented a buggy and driven to the river bridge, found the box containing my remains and deposited an envelope of cash in its place. He had no idea, he said, who actually robbed the grave.

After due deliberation, the jury acquitted him, ruling that buying my remains did not constitute stealing them --- the crime he had been indicted for.

Young Gillespie finished his medical education, practiced for five years at Coin, Iowa, and then moved to Fresno, California, where he established another practice and faded into obscurity.

Jesse marked my grave with the stone you see here. And then my family left Chariton, forever.
Posted by Frank D. Myers at 5:27 AM