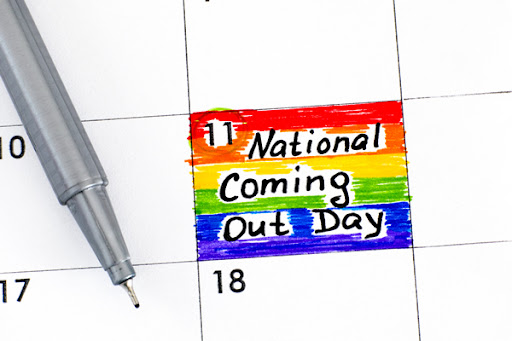 Today is the thirty-third National Coming Out Day, launched during 1988 on the anniversary of the 1987 National March on Washington for Lesbian and Gay Rights as a reminder that one of the most basic tools  LGBTQ+ people have in the struggle for equality is the power of visibility.
When people know someone who is LGBTQ+, they are more likely to support equality under the law, but beyond that, our stories can be sources of power for each other --- at various places along the "coming out" spectrum.
A common theme among folks my own age is how alone they felt as children at a time when public role models were rare --- convinced that no one else like them existed.
That wasn't true in my case. There were three of us who recognized each other very early and established relationships that endured to one degree or another for lifetimes. AIDS killed one nearly 30 years ago. Another dropped dead of a heart attack a few years ago after a lifetime in the closet. I'm still out here rummaging around and I think of both now and then.
And then there was my first real boyfriend, a relationship that flourished at the University of Iowa. A highly respected educator in another state and concerned about job security, he waited until retirement to emerge, then was claimed by cancer.
We all would have appreciated role models.
So yes, I think coming out is important --- but it's a very personal thing and no one who has not done it is obligated to.
The youthful, encouraged by the times we now live in to declare young and live openly, sometimes need to be careful. Parents are not always user-friendly and contemporaries quite often include bullies. It's wise to remember that personal safety and security still are issues to consider, too.
Coming out stories still come my way now and then, sometimes involving youngsters just emerging as adults. So I know that it's still a challenge and that, especially when family is involved, the fear of rejection is as strong now as it was 50 years ago.
My favorite piece of advice for parents --- and grandparents, too, for that matter --- is to broaden your own horizon by accepting the fact that one of more of your kids or grandkids may be gay and then work to overcome your own fears and fantasies and figure out how you're going to support them if needed. You'll be a better person for it --- even if your kids turn out to be straight (perhaps even boring).
Posted by Frank D. Myers at 7:41 AM