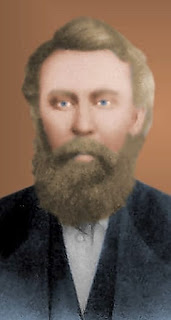 Interactions between humanity and livestock always have been fraught with peril --- moreso before gasoline-fueled horsepower replaced the hay-burning variety under "cause of death" and critters now largely confined to farms ceased to roam the streets of Chariton freely.

"At noon last Friday, Mr. Frank Smedley, an intelligent and respectable farmer of Pleasant township, was kicked on the abdomen by a horse, completely prostrating him. Dr. Simmons was sent for in the afternoon Saturday, and after an examination pronounced the injuries to be of a fatal character. He remained with the unfortunate man until half past 8 o'clock in the evening, at which time he expired. The doctor performed a post mortem and found the stomach, diaphragm and bowels ruptured, associated with other injuries which of themselves would have likely proved fatal. He leaves a wife and two children."

The outcome of an encounter a few days later in Chariton between mankind and a mad steer was more positive --- for the two men involved, but not for the steer. Here's a report from The Democrat-Leader of Nov. 2:

"A mad steer paraded some of the principal streets on last Saturday, taking such liberties with citizens as are clearly unconstitutional. He caught Mr. Joel Adams under the short ribs and nicely lifted him over into J.B. Smith's yard. Joel declared the proceedings entirely unwarranted on the part of his steership, but was very happy that he escaped death.

"Mr. M. Tickle was not quite so fortunate, but received some severe bruises and was carried to Dr. Simmons' office for attention.

"The steer was finally cornered and killed. We are well aware that he had a pretty hard head, for we gave him two loads from a shot gun and one from a revolver, which apparently had not more effect upon him than a swarm of flies would have produced. But a well directed shot from a Winchester rifle did the work, and he will not try to gore any more of our citizens."