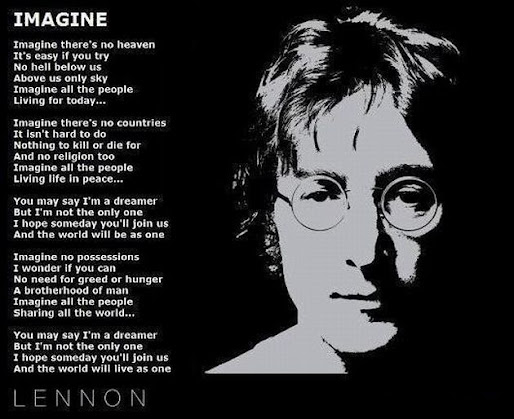 I can't imagine how I overlooked John Lennon's 81st birthday yesterday, or what have been his 81st had he survived.

So here's a graphic depiction of what remains his most widely known song, dating from 1971, although much of the content in it was credited by Lennon himself to Yoko Ono. She's now 88. Yikes.

This was posted elsewhere yesterday and I read some of the comments it attracted. Many pointed out quite rightly that Lennon's life did not exactly conform to the sentiments of the lyrics. Others added that "imagine" is the key word here, so the focus perhaps should be on aspirations rather than obvious contradictions.

Whatever the case, it remains one of my favorite songs, too --- offering food for thought on a Sunday or any other morning.