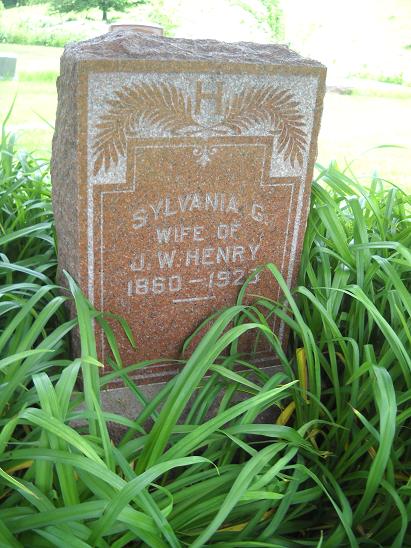 Sylvania (Paine) and John W. Henry had been married for nearly 30 years when she died at their farm home northeast of Chariton, age 62, during January of 1923.

According to her obituary, published in The Herald-Patriot of Jan. 18, "Mrs. Henry was of a retiring disposition yet always had a kind and hospitable greeting for her friends and was ever ready to lend a helping hand to others.

"Household duties and the care of her plants and flowers, of which she was a great lover, engaged her attention rather than the activities of a social nature. She was highly esteemed by all who knew her and her demise is deplored by innumerable friends."
There were no children to remember them, but John ensured that Sylvania's grave in the Oxford Cemetery was marked by a substantial tombstone. He continued to live on their farm for five more years.
Then, during the spring of 1928, John left Lucas County behind and for reasons lost to time became something of a vagabond. But he seems always to have carried a photograph of Sylvania with him. While on a visit to her family in Lucas County during May of 1931, he worked out a trade with his brother-in-law, a gentleman with the magnificent name Rodolphus Sylvander Paine, giving R.S. a larger portrait in return for a pocket-sized version that was easier to carry.
And then, during late September or early October of 1931, John's luck ran out in the desert not far from railroad tracks northeast of Blythe in far southeastern California. He apparently died alone and was carrying nothing that allowed authorities to identify him --- other than the small portrait of Sylvania. That portrait bore the mark of a Chariton photographic studio and led directly to the publication of a story headlined, "Woman's Picture is Only Clue in 'Mystery Death' " that was published in The Chariton Leader of Oct. 13:
+++

A photograph, taken in the William Best photographic studio in Chariton more than 60 years ago, is the only clue to the identity of an unknown man, whose lifeless body was found in the desert country 27 miles north of Blythe, Calif., on Monday, October 5, according to a letter to Sheriff J.H. Smith this week. The photograph of a lady, presumably the mother of the dead man, was sent to the local sheriff enlisting his aid in identifying the body of the man.

"When the body was found, he was wearing khaki trousers, blue shirt, brown cotton socks and a pair of low cut oxfords were lying about three feet away from the body.

"There were notes in the right shoe, stating that he had no home and was dying for water. These notes were written on a pamphlet out of the Santa Fe railroad time table.

"In the pocket of his coat was found a photograph of a lady which was taken by William Best, a photographer in your city.

"The body was taken to Blythe and prepared for burial and was buried at Blythe October 7."

Efforts on the part of local officials revealed the information that Photographer William Best, who at the time operated a photographic studio in the Wright building north of the northwest corner of the square here, had retired from business more than 60 years ago and has been dead for approximately 20 years. All efforts to find someone who could identify the photo found in the dead man's  pocket have been in vain.

R.S. Paine, who operated the Chariton greenhouse at the time, of course recognized his sister's image, contacted the Chariton Newspapers and solved the mystery, as reported in The Herald-Patriot of Oct. 15 under the headline, "Dead Man Identified as John W. Henry."

Positive identification of the man found dead in the desert country north of Blythe, Calif., on Oct. 5, as being John W. Henry, former resident of Lucas county was made by relatives here early Wednesday morning. Through the publication in the Chariton Leader Tuesday of a woman's photograph, found in the pocket of the dead man, the identification was effected when R.S. Paine, Chariton greenhouse operator, called at the office of the Chariton newspapers with a facsimile of the photograph and stated that it was a likeness of his sister, Mrs. Sylvania Paine Henry, who died here on January 8, 1923, and that the dead man was undoubtedly was her husband.

From the description sent to Lucas county officials by C.F. Rayburn, sheriff of Riverside county, Calif., it is definitely proven that the man, whose lifeless body was found near Blythe, Calif., was John W. Henry. His brother-in-law, R. S. Paine, and a sister-in-law, Mrs. Flora Newhouse, have communicated with Henry's half-sister, Mrs. W.H. Compton of Hawthorne, Calif., in an effort to complete the identification.

According to information furnished by Mr. Paine, Henry was 69 years of age, having been born July 24, 1862. He married Sylvania Paine in Oklahoma on March 19, 1894. Shortly thereafter they moved to Lucas county and located on a farm three and one-half miles northeast of Chariton. Mrs. Henry died on January 8, 1923, but her husband continued to live on the farm until the spring of 1928.

Since that time, he has lived in various parts of the country, having made several trips to California.

Early in May of this year, he visited at the home of Mr. Paine. When he came to Chariton at that time, he had a large photograph of his wife, but for convenience in carrying the picture he exchanged it with Mr. Paine for the smaller one found in his pocket when his  lifeless body was discovered  in the California desert.

Since Henry left Chariton, local relatives have received but one letter from him and that several weeks ago. At that time he was in Salt Lake City, Utah, and stated that he was en route to California. About six weeks ago, Mrs. Newhouse received a letter from Mrs. W. B. Compton of Hawthorne, California, half-sister of the dead man, inquiring as to his whereabouts. Nothing had been heard of him from that time, until Mr. Paine saw the picture of his sister in Tuesday's Chariton Leader, and read the story concerning the death of Mr. Henry.

The body of the dead man was taken to Blythe by Riverside county officials immediately after its discovery and was buried in that city on October 7. Mr. Paine stated yesterday morning that he and his sister were communicating with Mrs. Compton and that in all likelihood no change in the burial place would be made.

There's no sign of a marked grave for John Henry in the cemetery at Blythe, California, so apparently his bones rest unmarked. But at least, thanks to Sylvania, we know what became him and where all that remains is located.